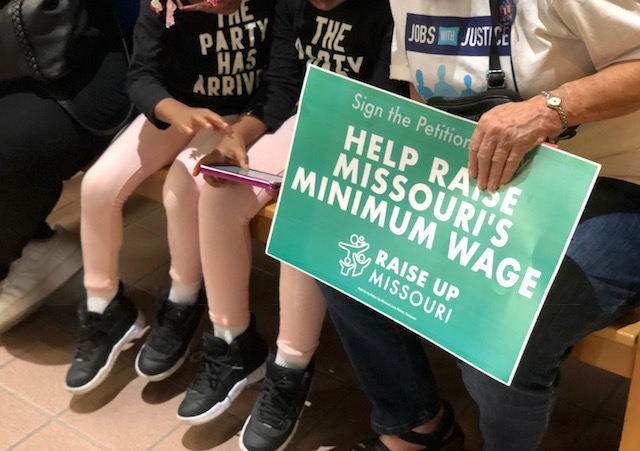 The increase in the minimum wage is part of the annual scheduled raises under Proposition B, which statewide voters passed 62.3 percent to 37.7 percent in November 2018. The federal minimum wage has been $7.25 an hour since July 24, 2009 — the longest period in history without a raise.

Under the ballot measure, the minimum wage in Missouri will increase every year for five years until it reaches $12 an hour in 2023. After hitting $12, future adjustments will then be made based on changes in the Consumer Price Index.

Some employees and businesses are exempt from the mandatory wage increase, including tipped employees, who must be paid at least half of the current minimum wage, any businesses doing gross annual sales or business of less than $500,000, government employees and most agricultural and farm employees.

Raise Up Missouri, the organization behind the ballot initiative, collected more than 120,000 signatures in early 2018 from residents in every county in the state to place the petition on the ballot to change state law. Any initiative that would change state law must gather at least 100,000 signatures from registered voters in six of Missouri’s congressional districts.

The proposition earned the support of regional business owners such as Pizza Head in south St. Louis city, Urban Chestnut Brewing and Joe Edwards, who owns multiple businesses up and down the Delmar Loop like The Pageant and Blueberry Hill.

Six states with the hikes are set to reach $15 an hour in the coming years — Illinois, California, Maryland, Massachusetts, New Jersey and New York. New York City required a $15 an hour minimum as of Dec. 31.

Laurie Knowlton, owner of Pickwick Underground Framing and Zen3 Spa and Bodyworks in Springfield, said of the higher minimum wage in a news release, “Raising the minimum wage will increase employee morale, retention and productivity. And when the staff is more stable, it builds trust and helps businesses maintain a positive reputation. With a higher minimum wage, workers will earn more and spend more – creating more cash flow for local businesses and communities.”

States with indexing where annual cost of living adjustments will take effect Jan. 1, 2020 include:

On July 18, the Democratic-controlled U.S. House of Representatives passed the Raise the Wage Act, which would increase the federal minimum wage to $15 by 2025, but the Republican-controlled Senate has not acted.