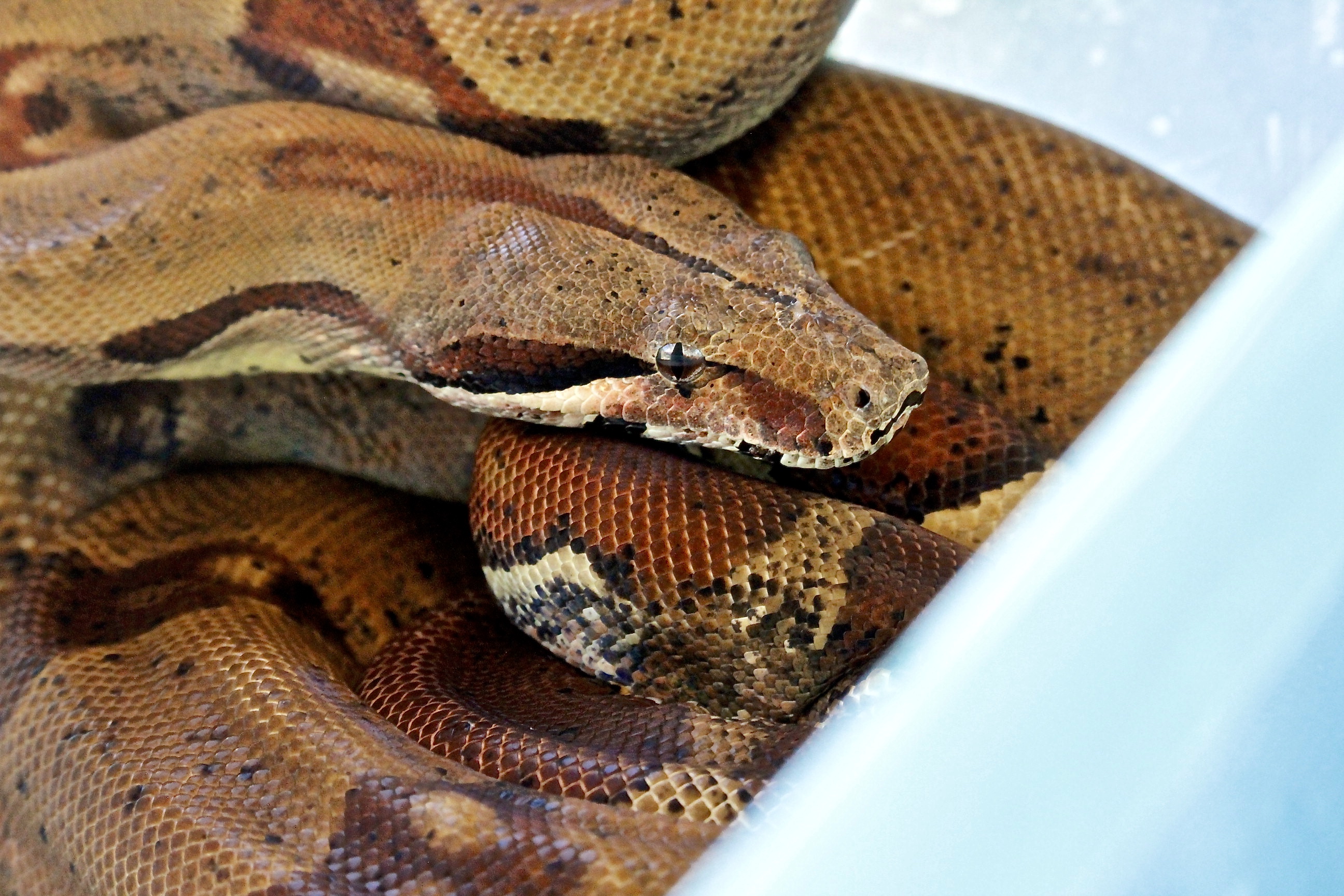 Pictured above: Another Columbian red tail boa constrictor just like the one stolen last week, as seen at a Lemay exotic pet store June 25. Photo by Erin Achenbach.

A boa constrictor was stolen from a Lemay exotic pet store June 16. But there is some justice, since Exotic A.R.C owner James Brumley believes the snake bit the suspects while they were fleeing the business located at 343 Lemay Ferry Road.

“The snake they stole was an aggressive one,” said Brumley.

The theft occurred when two women, posing as customers, inquired to one of the employees at Exoctic A.R.C. about a particular pet. The employee was the only one working at the time, and had to leave the trailer the shop is operating out of to go get the pet from a different room.

“Our security camera was down at the time, so as soon as (the employee) left… she (one of the suspects) grabbed the snake, the cage and the whole thing and booked it out of here,” said Brumley.

The St. Louis County Police Department said it received a call about a larceny at the pet store at 1:15 p.m. June 16. Police described the suspects as two black women, one with blue hair and one with dreadlocks. They fled in a dark blue vehicle.

Brumley said the two women seemed to know what they were doing when they stole the boa constrictor.

So he assumes they know how to care for the animal, which requires a medium-sized rodent a week and is “not hard to care for.” The particular boa constrictor they stole, a 2-year-old Colombian red-tail boa constrictor, was priced at $150 and was 4 feet in length at the time. It will grow to be 6 to 8 feet.

After a fire in November that burned down its original location, the store had to move its operations into a trailer behind the building. They thought they’d be back in the original store in three months.

“It’s turned out to be seven months, and they haven’t even gotten started. It’s going to be another three or four months,” said Brumley. “We’re trying to work out of that trailer, but it’s not working too well.”

Brumley said that the store used to have an average of one animal stolen each year when it was operating out of its normal storefront. Since moving to the trailer, however, animals and equipment are stolen on average once a month or more, with boa constrictors and their cages most often the target of theft.

Brumley blames the lack of a working surveillance system for the uptick in thefts.

“Seeing we had surveillance cameras everywhere and we had big monitors showing what the cameras could see, I think that deterred people. But of course without all that in place here, there’s no deterrent really.”

Stealing an animal in Missouri is a felony, regardless of the animal’s value.