Gephardt met with residents along the Meramec between Lemay Ferry and Telegraph roads from the back yard of Jerry Sanders. 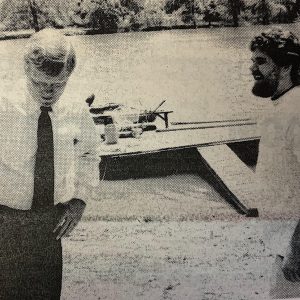 “It rained for 40 days, beginning April 15,” Sanders told Gephardt. “We wanted to build an arc, but all the wood floated away.”

Both men outlined programs and assistance residents of flood damaged regions have available to them as a result of President Bill Clinton’s designation of St. Louis County as a disaster area.

“We’ve issued more than 500 checks totaling $275,000 in relief and aid,” Pugh said. “We’ll continue to do so until people can get back into their homes and make them livable.”