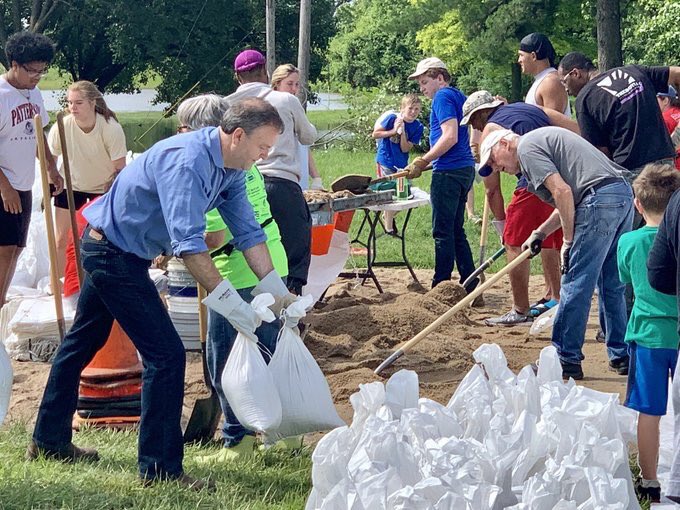 Pictured above: County Executive Sam Page sandbags Tuesday in Bellefontaine Neighbors, with the help of volunteers.

The Mississippi River will crest later than originally expected and at levels lower than the 1993 flood, but some South County residents have already been evacuated to an emergency shelter and others now have homes on “islands” cut off from everything by flooding.

This year’s flood is expected to be the second-highest ever recorded for the Mississippi after the Great Flood of 1993, which crested at 49.6 feet. Flood stage at Arnold is 24 feet. The Mississippi along Lemay has a flood stage of 30 feet.

So far, St. Louis County has filled more than 20,000 sandbags with 1,200 tons of sand and spent roughly $300,000 on the flood response, with more expected to come as the river rises and then recedes. County Executive Sam Page promised that the county would devote “every available resource” to the flood response. The money spent includes at least 2,500 hours of staff time.

But this flood’s impact on South County will be much less than the devastating 1993 flood since 90 houses in Lemay that were ruined by flood waters in 1993 were later bought out by the federal government and St. Louis County and made into park land. Other houses in Bellefontaine Neighbors in North County were also bought out, leaving only a dozen in that city that are heavily impacted by this year’s flood.

Page was sandbagging in Bellefontaine Neighbors Tuesday, with help from local labor unions. Dozens of residents responded to a call for volunteers.

“Fortunately in 1993, St. Louis County took extraordinary effort along with the federal government to buy out a lot of the homes that were affected by the flooding, and we’d have many more homes involved in flooding today if they had not acted,” Page said during his county executive’s report at the council meeting Tuesday. “But there are still many homes and businesses affected.”

Unlike the two devastating floods in recent years that were centered on the Meramec River, this year’s flooding is centered on the Mississippi. The Meramec will crest Sunday at 32.7 feet in Fenton and 42.5 feet in Arnold, but will not reach the record heights of the last two floods that devastated residents in those cities and Sunset Hills in 2016 and 2017.

In comparison to the Mississippi this time, the flooding at Fenton in comparison will be “relatively small,” St. Louis County Emergency Operations Director Mark Diedrich said.

The most stunning visual of this year’s floods, visible from Interstate 55, is a nearly overtopped River des Peres.

“I keep hearing 1993 levels, and that’s very factual,” Diedrich said. “But we’re not looking at the same flood,” because of the buyouts, primarily in Lemay.

“If you go down and look at Lemay Park tonight, tomorrow, you’ll see a lot of water, but those were all homes in ’93 so we’re not dealing with that. We have a relatively limited number of homes and businesses that we’re dealing with there.”

To save a cluster of Lemay homes on Alaska and Midway along the river, St. Louis County sandbagged around those houses, cutting those streets off from everything. The county tried to sandbag around the houses, but could not maintain a path to the houses, Diedrich said.

After taking an aerial tour of the flooding in Lemay in a helicopter with the St. Louis County Police Department, 6th District Councilman Ernie Trakas, R-Oakville, said he really got a sense of how isolated the streets are as islands due to the flooding. But he praised emergency officials for saving the houses.

“It’s amazing to see how you saved those homes on short notice,” Trakas said. “Granted they’re cut off, but at the end of the day they’re not under flood waters, and that’s all a result of your efforts, your team’s efforts.”

Any resident who wants sandbags can contact the county Department of Transportation, or CDOT. The county is getting bags from the U.S. Army Corps of Engineers and due to a shortage of sand because of sandbagging in the region, the county is using “fillings,” or a byproduct of stone, as sand substitutes that “work just as well,”  interim Transportation Director Dan Dreisewerd told the council.

Although the Meramec flooding is not forecast to reach the levels of a few years ago, Sunset Hills has 10,000 sandbags on hand to fight the flooding.

Of the nine shelters in Missouri and Illinois set up by the American Red Cross, the South County location is at the Kennedy Recreation Center. A temporary animal shelter has been set up in Kennedy’s parking lot so that residents can take their pets with them to the shelter.

As flood waters rose Tuesday around the Cedar Creek Lodge Apartments on Olde English Road in Affton, buildings 7783, 7784 and 7810 of the apartment complex were evacuated and provided with transportation to the emergency Kennedy shelter.

With flood waters rising quicker than expected in the last week, the county diverted county Department of Transportation and Parks and Recreation Department employees from their regular duties to fill sandbags. Police went door to door explaining the situation to residents of the apartments and other nearby residents and inviting them to go to the shelter if they wanted to.

Transportation workers have been responding to the flooding since mid-March, Dreisewerd said.

But the response kicked into high gear May 30, when at the request of businesses, workers began “trying to save the intersection” at Broadway and River City Casino Boulevard.

Working with the city of St. Louis, transportation workers determined they could not “save” the South Broadway Bridge by sandbagging, Driesewerd said.

“We could not save it because of the crest and concerns about structural stability of the bridge during trying to keep the water out,” he said. “Concrete does float with the water, so that’s the concern.”

Trakas praised the county’s response to the flooding.

Page agreed that the department’s response was “outstanding.”

After the river crests, the river will take four or five days to recede to levels seen earlier in the week and then will drop off relatively quickly, about a week after the crest.

But then the cleanup has to begin. Emergency officials at the county are planning to leave their command center staffed for several weeks.

The county Department of Public Health has stepped up to address any health concerns posed by the rising floodwaters and then after they recede.

County employees have switched to night shifts in some cases for mosquito spraying and have been spraying around sandbagging sites to prevent mosquitoes from breeding in the standing river water, interim Health Director Spring Schmidt told the council during Page’s county executive report.

“we don’t want to make that activity any more difficult than it already is,” Schmidt said of sandbagging.

The health department oversees the St. Louis County Animal Shelter, and so it is recruiting volunteers for the temporary animals shelter set up at Kennedy Rec Center for the pets of South County residents evacuated from flood waters. Volunteers are stepping up to walk those dogs and cats. As of Tuesday, the temporary shelter had three pets.

The department has posted information on how to clean up after flooding to its website, stlouisco.com/health. Residents rebuilding after flooding will have to sanitize belongings, need to follow special rules for how to wash items and need to watch for mold.

When 5th District Councilwoman Lisa Clancy, D-Maplewood, asked what council members could do to help or let residents know, Schmidt said, “It’s hard to overstate the importance of the hygienic aspect of this. Wash hands very carefully, you never know what is in the water. Make sure that you’re really carefully washing everything, wash clothes separately, wash toys separately. The hygienic aspects can really help anyone who’s dealing with flooding in their own home to prevent the spread of diseases and to prevent the spread of mold.”

As for businesses that are flooded but need to meet state and federal regulations for serving food or serving the public, the county will “work hand in hand with them” to get them back up and running, Schmidt said.