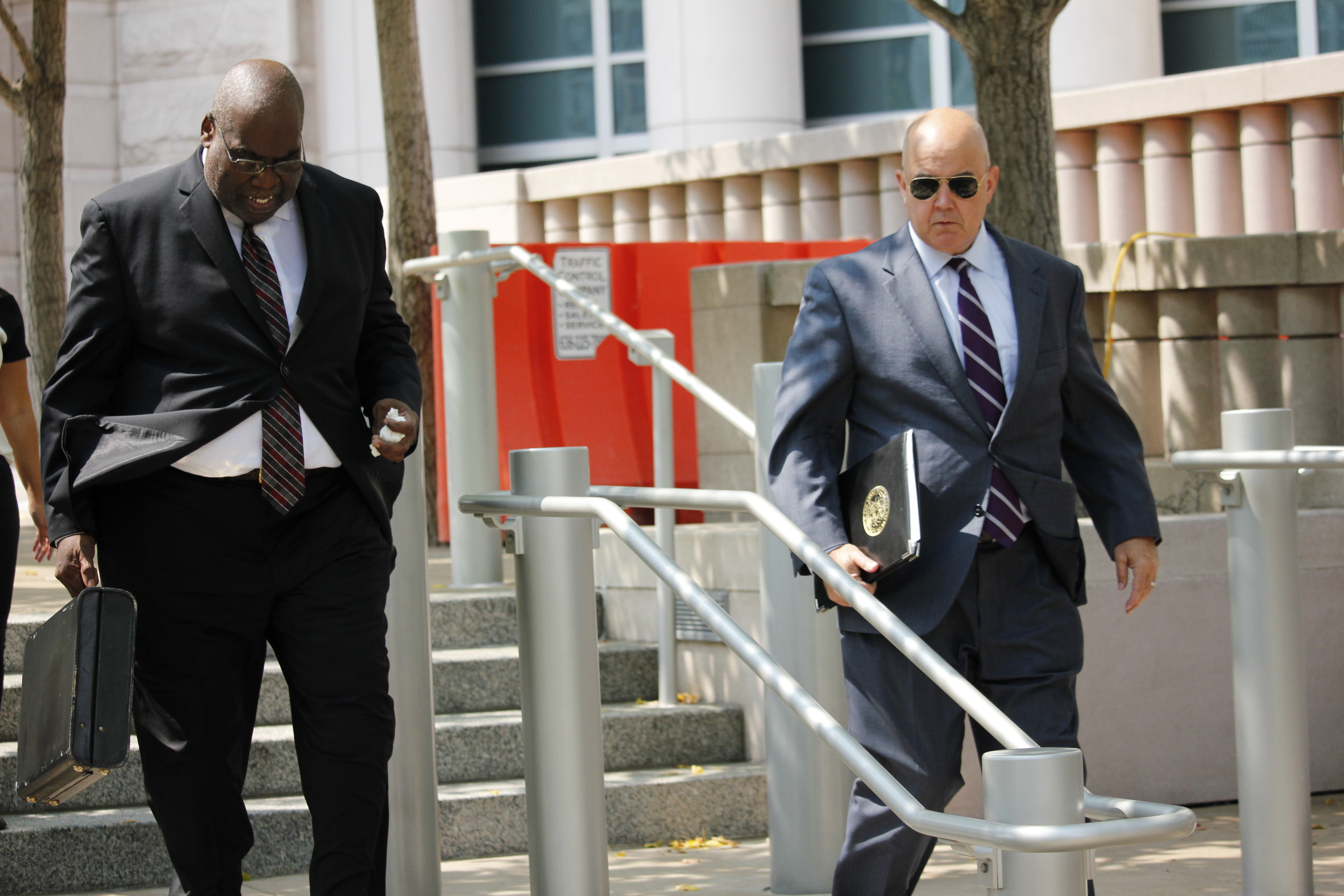 Pictured above: Bill Miller, right, exits the Thomas F. Eagleton Courthouse in downtown St. Louis with his lawyer, Larry Hale, left, after being sentenced to 15 months in prison for his role in former County Executive Steve Stenger’s felony pay-to-play schemes, Friday, Sept. 6. Miller pleaded guilty in June to one county of aiding and abetting honest services wire fraud/bribery for his role in one of four separate pay-to-play schemes concocted by Stenger. Photo by Erin Achenbach.

Steve Stenger’s former chief of staff will join his former boss in prison, serving nearly as much time behind bars as he spent working for the former county executive.

William “Bill” Miller Jr., 54, of Richmond Heights, was sentenced to 15 months in prison last week and three years of probation by U.S. District Judge Rodney Sippel. He is one of four people charged in the sweeping corruption scheme and the second to get prison time, after Stenger.

Miller pleaded guilty in June to one count of aiding and abetting honest services wire fraud/bribery for his participation in one of four separate pay-to-play schemes exchanging county contracts for campaign donations concocted by Stenger, a Democrat who will go to prison for a four-year term as soon as Sept. 21. In court records, Miller is portrayed as the enforcer behind a plot to ensure a $150,000-a-year contract went to a lobbying firm that was a Stenger donor.

Miller’s attorney Larry Hale had asked for a downward variance and probation instead of the 15 to 21 months recommended under federal sentencing guidelines. Sippel could have gone above or below.

Miller has two weeks to appeal his sentence. He and Hale declined comment as they left the Thomas F. Eagleton Courthouse in downtown St. Louis Sept. 6.

Unlike Stenger, who requested to serve his time at federal prison camps in either Pensacola, Florida or Yankton, South Dakota, Miller made no request where he prefers to serve his sentence. Sippel left the prison assignment up to the U.S. Bureau of Prisons and did not set a date for Miller to report. Miller was an attorney and has been disbarred.

Hale argued that Miller shouldn’t go to prison because of an unspecified “major disorder” and because a probation officer had agreed he was the “least culpable” of the defendants in the case, including former CEO of the city-county economic agency Sheila Sweeney — who was sentenced Aug. 16 to probation.

“Bill Miller never initiated any of these things,” Hale said of Stenger’s various pay-to-play schemes. “For most of them, he wasn’t even there.”

Miller took a $135,012 job working as Stenger’s chief of staff in December 2017, more than three years after prosecutors say Stenger turned to crime to hand out contracts to campaign donors. Miller resigned in April.

Miller bowed his head as Sippel handed down his sentence. Speaking earlier, he took full responsibility in a statement to the judge, noting that he committed a crime and apologizing to his family, the Missouri Bar and “especially the citizens of St. Louis County.”

As the son of the family that owns the Washington Missourian and its publishing company, Miller said of his parents, “I can only imagine what they think of me standing before you right now, and the same holds true for my wife. I will live with that the rest of my life,” along with losing the “reputation, integrity and dignity” that he spent a lifetime building as the legal counsel for former Gov. Jay Nixon and as an administrative law judge. Miller’s wife and father were in the courtroom. He and his wife have four children, including two in college and a 14-year-old.

“I lacked the courage and the discipline to tell Steve Stenger no,” Miller said. “It’s something that I think about every day, and probably will for the rest of my life.”

Miller said he was not driven to keep Stenger in power so that he could take the job of chief of staff under a city-county merger, as prosecutors said. He also said they painted an unfair portrait of him in their sentencing memo, emphasizing unflattering comments he had made about diversity groups and racial equity.

In court and in sentencing documents, Hale said that prosecutors themselves outlined how Stenger was a vindictive boss who fired anyone who didn’t follow his exact orders, and Miller would have been “gone with a quickness” if he didn’t do just that.

Miller ran day-to-day operations in St. Louis County last year while Stenger raised money and played video games, Hale said. But when Miller went to Stenger’s house one day to ask him a question, Hale said his client — and federal agents listening in — learned how the boss would react if Miller didn’t take his marching orders.

“Who was running St. Louis County government for Steve Stenger? Bill Miller,” Hale said. “And Steve Stenger yells at him.”

Goldsmith called Miller’s version of “the boss made me do it” the “just following orders” defense, and he said the judge shouldn’t buy it. In prosecutors’ sentencing memo, Assistant U.S. Attorney Reginald Harris called it the “Nuremberg defense” and said it had been rejected during the Nuremberg trials and in numerous cases since, including President Richard Nixon and his Chief of Staff H.R. Haldeman.

Hale also argued that Miller didn’t have nearly as much fault in Stenger’s criminal enterprise as Sweeney or former 6th District Councilman and Stenger’s Chief of Policy Jeff Wagener, who had served as Stenger’s top official since he first took office in 2015.

Unlike Miller, Wagener is frequently featured in the indictments yet “has not been charged with a crime, and will not be,” Hale said.

But Assistant U.S. Attorney Hal Goldsmith said that Miller was different than Sweeney and Wagener because he was “all in” on Stenger’s scheme, the county executive’s “right-hand man” who even volunteered for projects he wasn’t asked to do such as bribing a County Council member. In that case, Stenger declined Miller’s offer and said he would handle it himself. Comparing Miller to Sweeney was like “comparing apples and oranges,” Goldsmith said, although he did not elaborate on why.

“Every scheme and conspiracy has a leader, but Bill Miller worked awfully hard to make sure that this scheme succeeded,” Goldsmith said.

The prosecutor said that Miller was so on board with the corruption that he even lied to the FBI to protect his boss when special agents approached him March 20, 2019, and asked him about Stenger’s schemes, including the council bribe.

Goldsmith told the judge that Stenger intentionally hired Miller to replace Wagener because he knew “this defendant would aid and abet him with his scheme, his pay to play.”

Miller was caught on wiretaps delivering what he called “the message” to Sweeney, which was clear: Stenger wanted her to give a $150,000-a-year St. Louis Economic Development Partnership state lobbying contract to John Bardgett & Associates, the firm that had traditionally held the contract and donated to a series of county executives.

Miller took a more threatening tone about Sweeney in a recorded conversation with Wagener, saying, “If it was just me and her, in some dark room somewhere, I might make it a little bit more forceful.”

Miller was Stenger’s bulldog in public too, attacking the County Council during last year’s budget negotiations when Stenger declined to get involved. Miller, who once ran his family’s newspaper and once served on the board of the Missouri Press Association, issued a statement to The Call that said the council’s millions of dollars in cuts were a “breach of public trust.”

Goldsmith brought up that statement in court, noting that Miller was publicly condemning the County Council for violating the public trust and violating the law while he was doing it himself behind the scenes.

Although Miller was only charged in connection with the Bardgett lobbying contract, prosecutors’ sentencing memo included more information about his and Stenger’s supposed attempt to bribe an unnamed elected official, called “Jane Doe” in court records, who only matches the description of 4th District Councilwoman Rochelle Walton Gray, D-Black Jack.

Talking to Wagener in a wiretapped conversation, Miller outlines a plan spearheaded by Stenger for the developer to bribe Gray by hiring her father, attorney Elbert Walton, in some capacity. Gray opposed the redevelopment as soon as she got into office, and the plan supposedly would sway her to Stenger’s side and get it approved.

“Do I think it’s right? Of course it’s not right. What do we f—ing care?” Miller said as federal agents listened in.

In court, Goldsmith outlined that conversation and said, “This defendant was all in on this scheme. That’s as ugly a statement by a public official as there is.”

Miller said prosecutors painted a misleading portrait of him in their sentencing memo, including wiretapped words calling minority contracting group MOKAN a “racket.” He pointed to his hiring of St. Louis County’s first chief diversity officer and development of a new all-encompassing equity plan.

“I’m assuming this was done to paint Mr. Miller as a racist,” Hale said.

He said sarcastically, “Bill Miller, this white racist, hires an African American lawyer to represent him in the darkest legal matter he’s ever faced — that’s very interesting. Now fortunately, Judge, insensitive, inappropriate comments are not a crime. And Lord knows if they started locking up everybody who made insensitive, inappropriate comments, a lot of us would be in jail ‘cause all of us have weak moments at times. But they do not reflect the beliefs of this man.”

Judge: ‘You do have a future’

Sippel noted that Miller made one of the defining statements of the entire Stenger affair when he said that his and Stenger’s style of governance was merely “the art of staying in power.” He called those words “very damning.”

He said he believed Miller knew the “quid pro quo nature” of what was going on with Stenger, “trading the treasure of the public in exchange for power.”

But while sending him to prison, the judge told Miller, “This is not about you as a person. You do have a future.” He said that in part, Miller’s character, education, background and opportunity were what made the crime so hard to reconcile and figure out how he made the choice to step over the line into illegal actions.

Above all, deterrence was the most “compelling” factor in the 15-month sentence, Sippel said: To prevent others from doing what Miller did.

“People go to work every day believing that the people in this building and other government agencies have their best interests at heart so they can go about their lives,” Sippel said. “And it’s a tragedy when that trust is betrayed, because that fabric of our society is important…. Respect for the law is important. What will make the next person stop and think?”