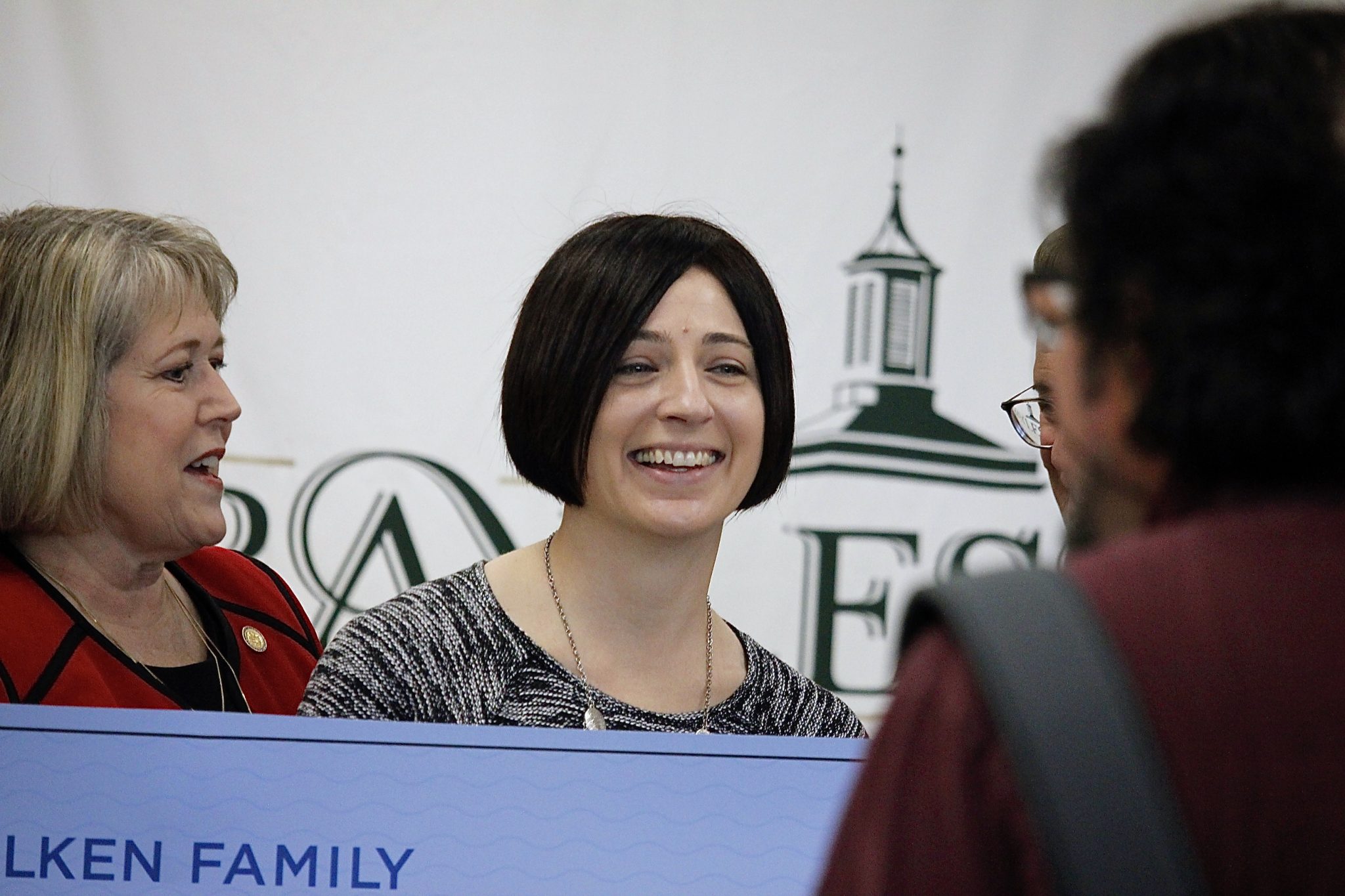 Pictured above, Therese Shain, a special-education teacher at Bayless Elementary, smiles for photos after receiving a $25,000 Milken Educator Award Wednesday morning. Shain is one of 33 educators nationwide to receive the award in 2018-2019. Photo by Erin Achenbach.

A Bayless Elementary School teacher was awarded one of education’s most prestigious honors, the $25,000 Milken Educator Award, at a surprise school assembly Wednesday morning featuring guests such as First Lady of Missouri Teresa Parson and Commissioner of Elementary and Secondary Education Margie Vandeven.

Therese Shain, a special-education teacher at Bayless Elementary, was presented the award by Milken Family Foundation Chairman and Co-Founder Lowell Milken and Vandeven.

She is the only Milken Educator Award winner from Missouri this year and is among only 33 honorees nationally to receive the prestigious award.

“To quote Ralph Waldo Emerson, ‘The secret in education is respecting the student,’” said Milken. “Therese Shain is living this truth by helping students with challenges craft their own unique and highly effective paths to learning. We are proud to welcome her as a Milken Educator.”

Shain has taught at Bayless for a decade and has served as a check-in and check-out mentor, meeting with students daily to go over their goals and success strategies, and offer them praise and encouragement. She teaches a social skills group as well as reading, writing and math groups. Shain’s students have met more than 90 percent of their reading goals, 80 percent of their writing goals and 80 percent of their math goals.

“As a special-education teacher, Therese helps her students reach through their challenges and have a voice in their learning,” said Vandeven. “She is an example of the type of effective educator every child deserves. I congratulate her on this outstanding achievement.”

In addition to her role as a teacher, she has served on the special-education area leadership team, Positive Behavioral Intervention Strategies teams, school leadership team and a professional-development committee. She also mentors new teachers and works with fellow educators on their behavior plans.

“Therese Shain is a teacher’s teacher, an accomplished educator,” said Ron Tucker, Bayless Schools superintendent. “Her goal each day is to provide her students with effective instruction in a very caring classroom. She does this with little fanfare and simply loves to teach. She is very deserving of this recognition.”

In addition to directly working with students to help them create and manage their own educational goals, Shain works closely with individual classroom instructors and mentors young special-education teachers. She also speaks with her students’ parents weekly to keep them informed.

Milken Educators are selected early to mid-career for their achievements and what they have yet to achieve. In addition to the unrestricted $25,000 prize and recognition, Shain will get membership into the National Milken Educator network, a group of more than 2,7000 teachers, principals and specialists who have received the award.

The 2018-2019 recipients, including Shain, will attend a forum in New Orleans in March for the opportunity to network with former Milken Award recipients and hear from state and federal officials.

The very first Milken Educator Awards were presented by the Milken Family Foundation in 1987, 31 years ago. Since then, more than $138 million in funding, including $68 million in $25,000 awards, has been dedicated to the Awards initiative. The Awards alternate yearly between elementary and secondary educators and unlike most educator recognition awards, educators cannot apply for a Milken Educator Award and don’t even know they may be under consideration.

Missouri joined the Milken Educator Awards program in 1996 and since then, 48 educators in the state have received the honor with a combined $1,2250,000 awarded in Missouri.