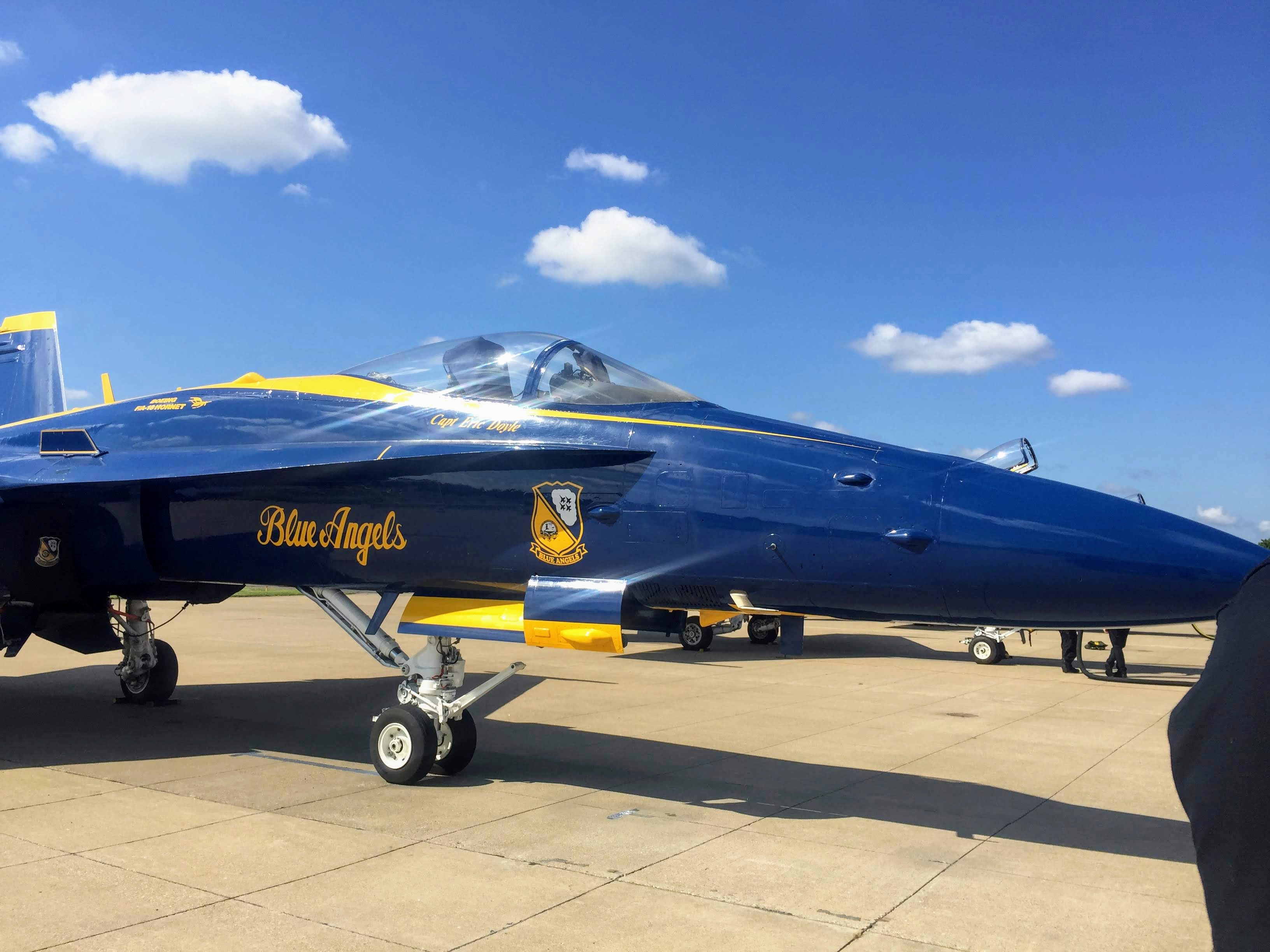 Pictured above: The Blue Angels No. 1 plane of Capt. Eric Doyle just after arriving in Chesterfield for the Spirit of St. Louis Air Show this weekend. Photo by Gloria Lloyd.

The Spirit of St. Louis Air Show happening in St. Louis County this weekend is one of only three air shows worldwide that will feature the U.S. Navy Blue Angels and the Royal Air Force Red Arrows.

It’s rare for the famous flight demonstration teams — the Blue Angels representing the United States and the Red Arrows representing the Royal Air Force of the United Kingdom and Great Britain — to appear alongside each other at air shows. It will happen only three times this year, worldwide. And one of those shows is in St. Louis.

The 2019 Spirit of St. Louis Air Show & STEM Expo, presented by Boeing, will be headlined by the Blue Angels flying their made-in-Missouri Boeing F/A-18s.

The 2019 event will also feature the Aeroshell Aerobatic Team, Skip Stewart, the F-22 Raptor Demo Team and Matt Younkin in a Beech 18. Additional details and performers are listed at www.spirit-airshow.com, which is also where tickets are on sale for $30. 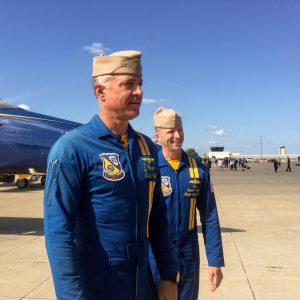 The Red Arrows arrived in St. Louis Friday morning, marking the first time the team has ever appeared in St. Louis. The Blue Angels flew from their home base in Pensacola, Florida to St. Louis Thursday morning, to headline one of just a few appearances in the Midwest this year out of dozens of air shows.

“We do 32 air shows a year but we don’t get to the Midwest that often, so when we get here it’s always very special because we get a very warm reception,” said “The Boss” of the Blue Angels, Capt. Eric Doyle. “We love St. Louis.”

As “The Boss,” Doyle flies the No. 1 plane. During practice Thursday, the team even flew over Oakville.

The St. Louis air show is also unique in several other ways: It’s a special showcase of Boeing products, since the Blue Angels’ plane, the F-18, is made in St. Louis. The Blue Angels will get to perform in front of some of the people who made their planes. St. Louis is also a city with an esteemed aviation and space history.

The F-18s, which will be replaced by F-18 Super Hornets in two years, are “very near and dear to our heart… and it’s just a great aircraft,” Doyle said.

The Blue Angels represent both the Navy and the U.S. Marine Corps, which have both flown the F-18 for more than 30 years.

The Blue Angels’ public affairs officer, Lt. Cmdr. David Gardner of Warrenton, Missouri, said, “We do represent the Navy and the Marine Corps. We represent all of them, 800,000 of them, active, reserve, even the civilians — all around the world.”

Gardner is one of several members of the Blue Angels team that are from St. Louis, and will have fans in the crowd wildly cheering for their hometown heroes.

Travis “T.J.” Bradley, originally from De Soto, was all smiles as he stood next to the Blue Angels jets in his hometown. He was born in St. Louis, as were the Blue Angels’ planes.

“It’s super humbling that I get to have the opportunity to represent the city for this team and to be here, it’s — there’s no words even for it, it almost chokes me up a little bit, it’s pretty awesome,” Bradley said.

And while thousands of people will attend the air show, his cheering section might just be the loudest.

“You’ll have probably 140 people that know me that are going to be screaming too, so it’s going to be pretty awesome,” Bradley said.

The Blue Angels themselves have been flying the F-18 for 33 years. Although they look forward to flying the Super Hornets, the current F-18s are “doing awesome for us, so we’ll keep doing that as long as they let us,” Doyle said.

It’s also a Navy Week, in which the Navy does special outreach to a city around a special event. That was showcased when two members of the Blue Angels team visited Oakville High School Friday to talk about their careers in STEM — science, technology, engineering and mathematics.

And the week stands out for the Blue Angels because their matching team, the St. Louis Blues, won the Stanley Cup. Appropriately, the Blue Angels were visited by the Cup Friday.

Doyle talked with The Call just after flying in Thursday, jet fuel still in the air.

“We had a nice quiet flight up here,” Doyle said. “We actually had a little extra time, so we got to swing by the Arch and get a look at the sights. It was beautiful.” 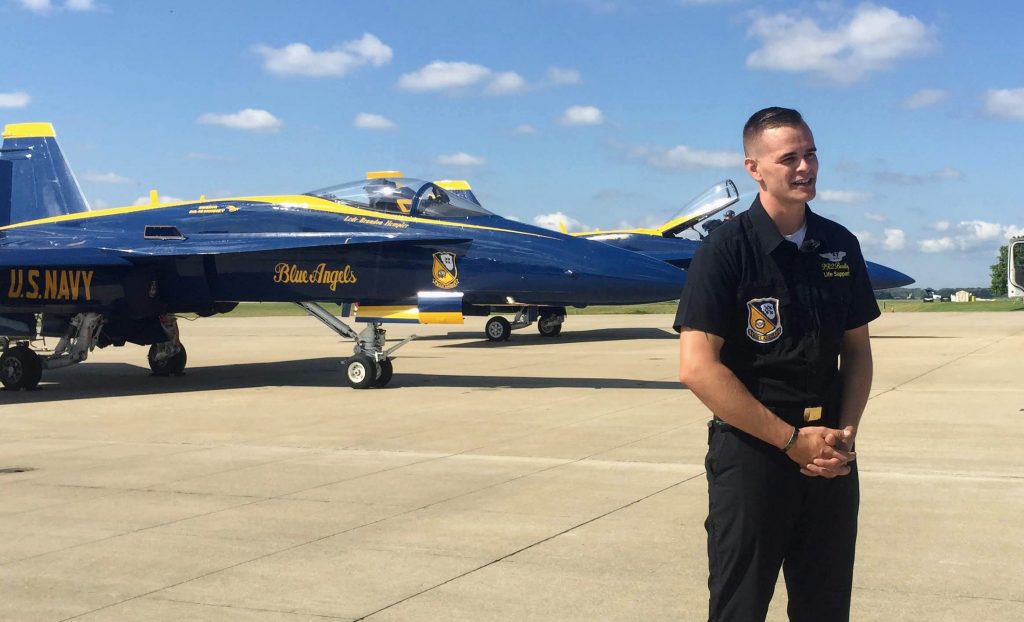 Private Travis “T.J.” Bradley, of De Soto, talks about his work with the Blue Angels in front of one of the planes. Photo by Gloria Lloyd.

Although some members of the team are coming to St. Louis for the first time, Doyle said he’s been in St. Louis many times during his career as a Navy pilot. Since the Navy flies Boeing F-18s, he’s visited Boeing in St. Louis County many times.

With mostly clear skies in the weather forecast for the weekend, Doyle said the Blue Angels can fly higher and give more thrills to the crowd. Good weather allows for a “few more maneuver options,” he hinted.

For the most part, the show will be similar to the show the Blue Angels have been writing across skies for 73 years, with some minor changes.

But Doyle said part of the show is not even in the skies, but what happens on the ground. The Blue Angels bring almost 50 team members to back them up on the ground.

“To get all these six planes in the air takes a truly team effort,” he said. “It’s very inspiring.”

That is emphasized by the Blue Angels’ temporary stints on the demonstration team. They serve about two or three years and then return to their regular jobs in the Navy or Marines.

“We all will come from the fleet, and we’ll go back to the fleet,” Doyle said.

And there might be some children in the crowd who grow up to fly the planes themselves. Several of the Blue Angels team said they once attended air shows and dreamed of being a part of the spectacular show.

“I’ve wanted to fly planes like this since I was a little kid, coming to air shows just like this when I was 5 years old and watching folks like the Blue Angels or the Thunderbirds or the 22 Raptor fly, and that inspired me to do something like this,” Doyle said. “So there isn’t a day that goes by that I don’t get to get in that airplane and just be thankful that I get to do what I get to do.”

Marine Sgt. Charles Bosler, who is from New Hampshire and works on avionics and technology in the planes, said his father was in the Marines and he wanted to follow in those footsteps when he went to air shows as a youth.

“I said hey dad, I’d like to be able to grow up to be just like you,” Bosler said. And joining the Marines at 19 was “the greatest thing I’ve ever done with my life.”

All in all, attending the air show is a win-win, Bradley said.