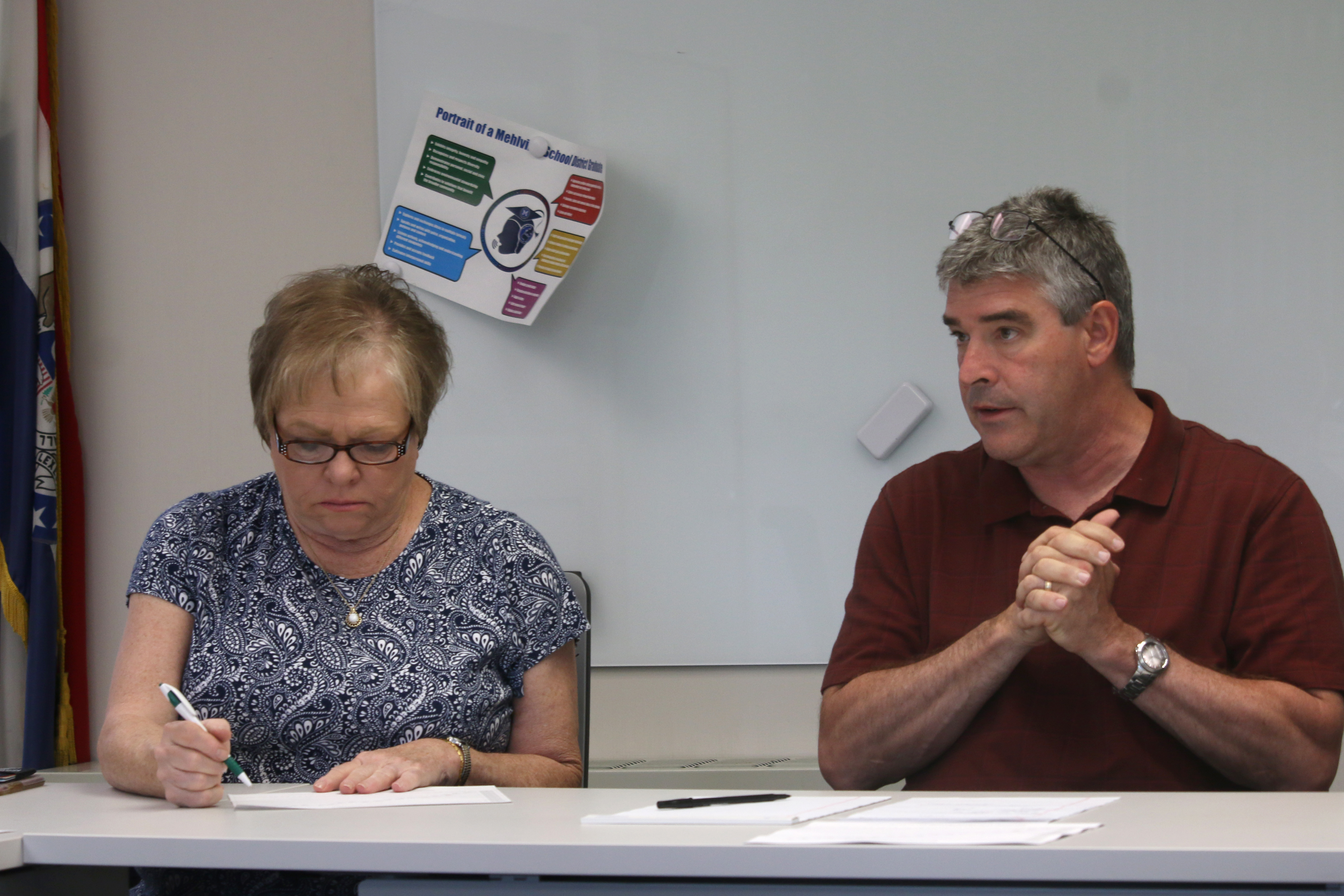 Pictured above: Mehlville Board of Education member Jean Pretto and CFO Marshall Crutcher discuss the 2020 budget during a board meeting June 5, 2019 at Mehlville High School. Photo by Jessica Belle Kramer.

Like other political subdivisions in the South County area, the Mehlville School District and Mehlville Fire Protection District both saw a 15-percent increase in assessed value — nearly double the 8 percent the school district had projected.

Reassessments occur every odd-numbered year, and the Mehlville School District’s assessed valuation climbed 15 percent in preliminary assessments, coming in at $2.1 billion, about $274 million more than in 2018.

Assessments are not finalized until September, and the Hancock Amendment to the Missouri Constitution means that school districts with large value spikes have to roll back the tax rate so that they take in the same dollar amount they took in 2018, plus the inflation rate of 1.9 percent.

Chief Financial Officer Marshall Crutcher said that Mehlville originally estimated that the assessed valuation would increase by 8 percent. The 15-percent increase means that the district will reduce the estimated tax rate by 46 cents instead of 21 cents, but revenue remains unchanged.

“Although the revenue is unaffected, it’s a key benchmark to look at how much 1 cent of tax revenue generates. So instead of the tax rate going down 21 cents like we thought in April, it now looks like the tax rate will decrease to 46 cents,” said Crutcher at the May 16 Board of Education meeting. “When you look to see how that drives the benchmark, it really is a significant change because this year 1 cent of tax generates about $177,000 of revenue. Next year, because tax rates are going down, 1 cent will be worth almost $204,000. That’s a huge change that we haven’t seen… for a number of years. It’s been about 2008 since we’ve had this kind of an assessed value change.”

Rolling back the tax rate provides a safety net in case property values decrease in the future, because the district will have more room under its tax-rate ceiling in the event it has to “roll up” the tax rate.

Mehlville Superintendent Chris Gaines explained in an interview with The Call that just because residents may see a 15-percent increase in their assessed values, that does not mean that their taxes will increase 15 percent.

“We can only capture the consumer price index, so although everything’s gone up 15 percent, we can only capture about 1.9 percent of that. So their taxes may go up slightly, but they’re not gonna go up 15 percent because we’re gonna make this massive rollback,” said Gaines. “The system is built across the state not to be a crazy burden to taxpayers when property values increase like that.”

Other districts in South County also saw hikes in their assessed valuations. Lindbergh Schools saw a 17-percent increase in its assessed value, coming in at $1.6 billion, roughly $250 million more than 2018.

And the Hancock Place School District leads St. Louis County with a staggering 34-percent increase in its assessed valuation.

The Mehlville Fire Protection District also saw an increase in its valuation.

Like Gaines, MFPD Chief Financial Officer Brian Bond emphasized that although assessed values increased by 15 percent, that does not mean taxes will increase by 15 percent.

“The reality is, they’ll see some increase in taxes but it won’t… be close to the percentage increase they saw on their assessed value,” said Bond. “We’re restricted to whatever the CPI is. So if the inflation rate is 2 percent, that’s what we’ll be restricted to as far as growth.”