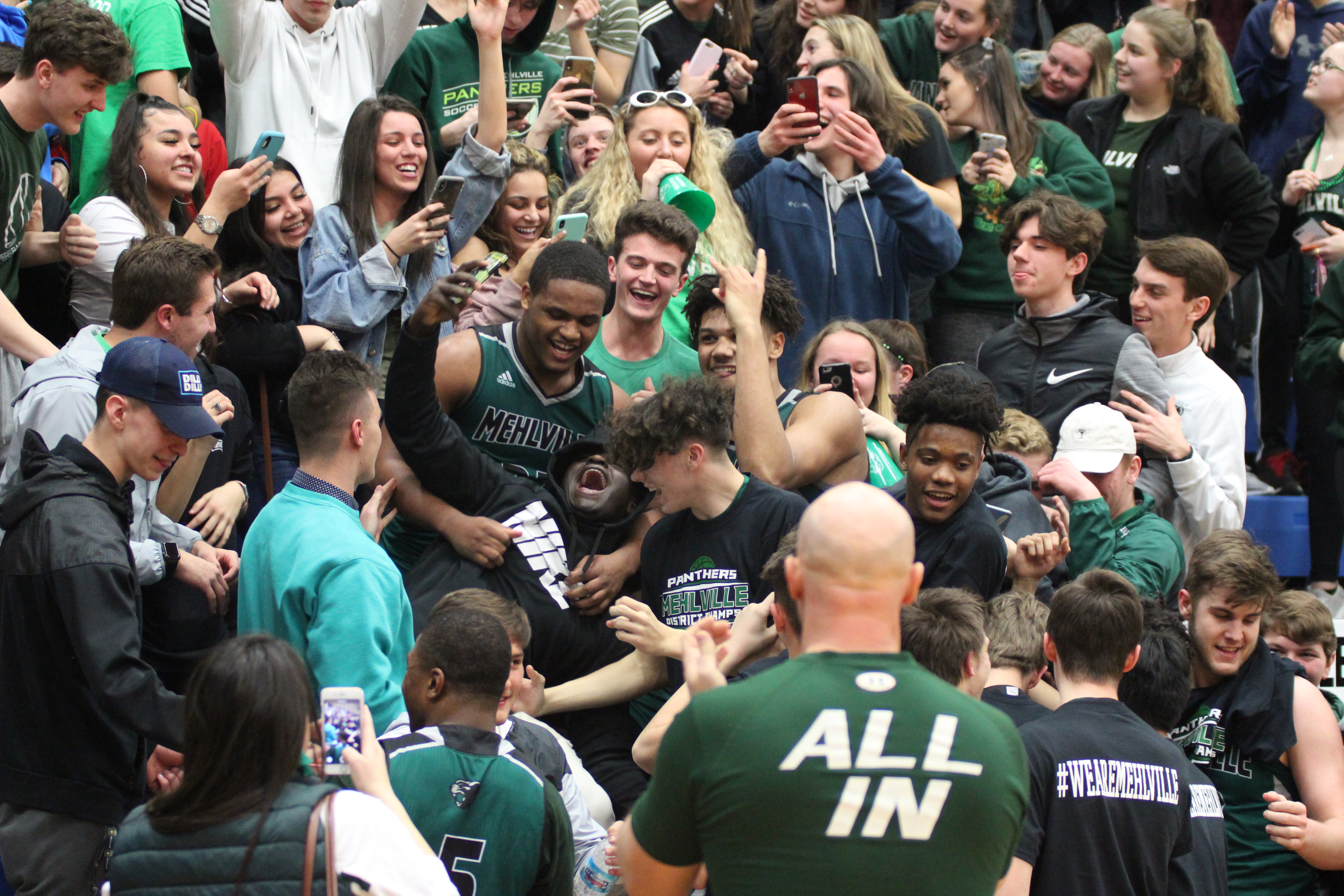 Pictured above: It was pandemonium March 6 after the Mehlville High School Panthers boys basketball team won the sectional championship versus Jackson in Hillsboro to make the state’s Elite Eight. After wading into the crowd to celebrate their win, Mehlville’s King Waller and Davion Bradford took selfies with fans. The team went on to lose in the state quarterfinals against CBC. Photo by Stephen Glover.

At the start of the 2018-2019 season, the Mehlville High School boys basketball team set a goal of being one of the top teams in the state.

The Panthers did just that as they defeated Jackson 40-32 in the Class 5 state sectional game March 6 at Jefferson College in Hillsboro. The win against the Indians vaulted Mehlville into the state quarterfinals, which means they were one of the top eight teams in the state.

“It was a great win for our school and our community,” Mehlville head coach Andy Guethle said. “We don’t want it to stop.”

The Panthers (23-7) found themselves down 20-15 at halftime, which prompted Guethle to challenge his players going into the second half of play.

“We felt pretty good at the half and honestly, I told our guys, ‘It’s moments like this that are going to test our resolve,’” Guethle said. “Without the adversity that these kids faced, we wouldn’t have been able to show our toughness.”

Mehlville would go on to score 25 points in the second half and hold the Indians to just 12 points total in the third and fourth quarters.

Mehlville’s Dylan Branson led the Panthers with 17 points. The junior guard has averaged 15.7 points per game this season.

“Jackson played us with the zone and they then had to stretch out the defense a bit when they then fell behind,” Guethle said. “They left Dylan unguarded on the perimeter, and he hit a few shots from three on them.”

Also scoring in double figures for the Panthers was junior center Davion Bradford with 12 points and 11 rebounds.

“They (Jackson) collapsed on Davion in the first half, and while he didn’t have his best game, we did use him to move the ball around a lot,” Guethle said. “I think he had a big part to do with how well we did in the second half.”