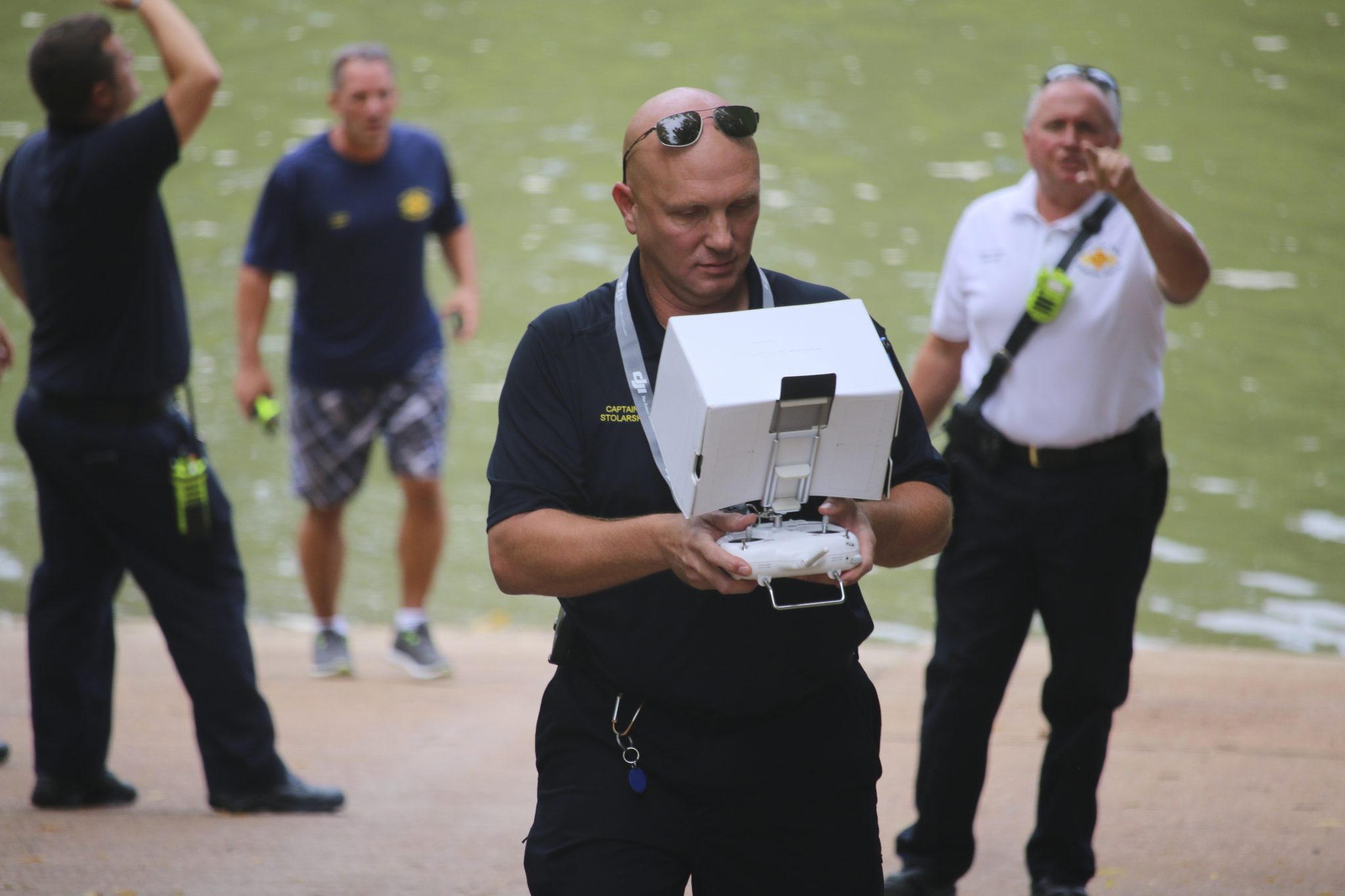 Pictured above: During a mock rescue in 2018, Mehlville firefighter and drone operator Roman Stolarski pinpoints where on the Meramec River the rescue boats need to go to save the ‘victim’ using the district’s small drone. Photo by Jessica Belle Kramer.

The Mehlville Fire Protection District will soon be one of the few fire districts in St. Louis County to use a drone at the scene of emergencies.

The MFPD Board of Directors unanimously approved buying a new $29,273 drone and camera to assist in the range of emergency situations the fire district encounters. Board Chairman Aaron Hilmer was absent from the official 2-0 vote Sept. 25 because he had to leave before it took place, but he signaled his approval of the idea earlier in the meeting.

Just after the vote to buy the drone, board Treasurer Bonnie Stegman laughed, “We bought ourselves an unmanned vehicle,” using the term that drone operators prefer.

The fire district sees the purchase as key to safety of firefighters and the public.

“We have gone pretty much as far as we can go without coming to the board and getting a drone,” Chief Brian Hendricks told the board.

The fire district plans to use its new flying machine to fight fires, and many other real-life situations the district encounters.

The drone will have infrared technology and a camera similar to what its seller called a “beefed up iPhone camera” that can scan fires, rivers, crashes and other hazards before actually sending firefighters in.

The chief gave several scenarios firefighters have actually faced and will likely face again in which a drone would have been immeasurably helpful:

• The fire district frequently gets called in by the St. Louis County Police Department to help find people who are lost or missing along or in the Mississippi River. The bluffs in Bee Tree Park are particularly difficult to search and what Assistant Chief Dan LaFata termed a “hotspot.” With a drone, firefighters can see if anyone is there before climbing the bluffs.

• The district also has to try to locate people who might have jumped off the Jefferson Barracks Bridge. In those cases, it’s often unclear whether the person actually jumped or not. Compounding the problem is that most of the jumping cases happen at night, when it’s most difficult to tell if the person is on the JB Bridge itself, in the water below or if they left the scene altogether.

“Imagine it’s February, it’s cold. Did they or did they not?” LaFata said. 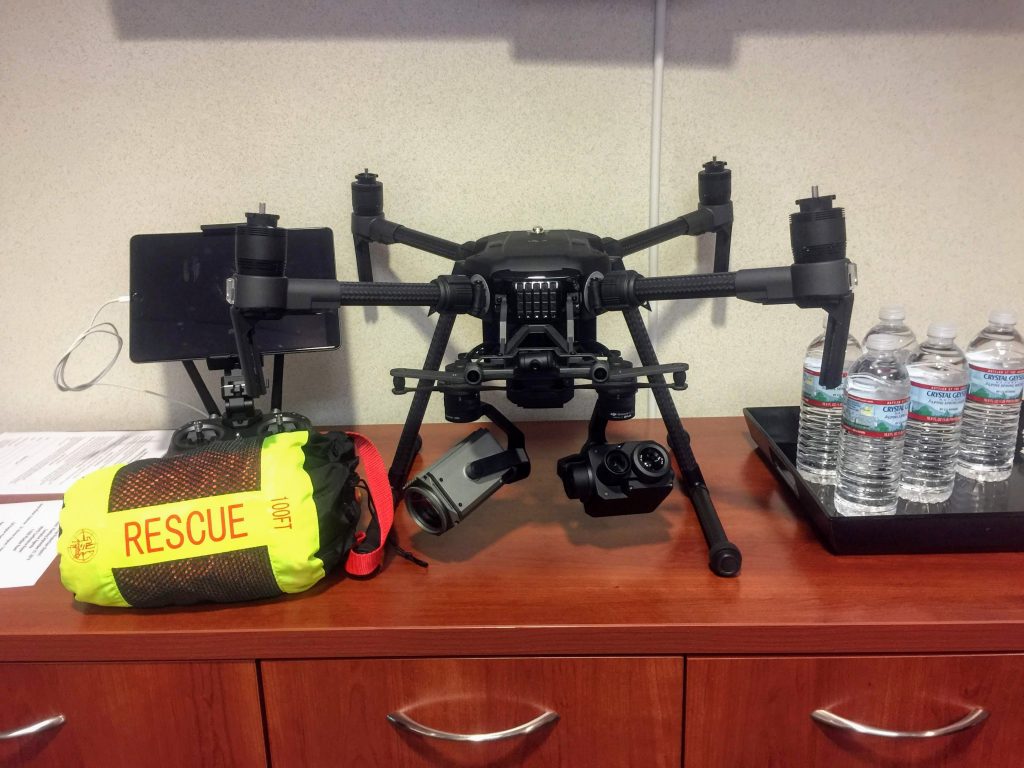 Pictured above: The $29,000 drone purchased by the Mehlville Fire Protection District. Next to it is the inflatable raft it can deploy in case of water rescues. Photo by Gloria Lloyd.

He showed a video the fire district recorded of a drone test in which the firefighter/pilot operating the drone stood in the parking lot at the Jefferson Barracks Veterans Affairs hospital at Interstate 255 and Koch Road. The drone could fly next to the JB Bridge, giving the firefighters real-time close-up video that shows whether a jumper is on the bridge, hovering on a part of the bridge that goes underneath the tresses or actually in the water below.

With the drone video, the fire district can see if the person is on the bridge or not without risking the lives of firefighters or even leaving land.

In cases where a person is found in the Mississippi River, the fire district doesn’t have a boat equipped to go out in those fast-moving waters. But the drone can actually drop an inflatable raft to someone stranded until help can get to them.

The fire district contracts with JB Marine for boats that can handle the choppy Mississippi River waters in jumping cases.

• During fires, people need to be found behind flames. Sometimes people in a house or building can’t be seen from the street, where firefighters have to stand to judge where to go in to find any remaining survivors.

With the drone, firefighters will be able to see into second-story windows from the same level as that second story, and the drones include infrared technology that shows the heat signatures of people behind a window or a wall that can’t be detected by the naked eye. LaFata said the drone would be particularly useful for fires at two- or three-story apartment buildings, or to see inside attics to see how extensive house fires are.

Currently, the fire district extinguishes those types of fires by forcing doors down and dealing with whatever is behind the door, without any indication of what that is. The drone will make rescues much more efficient and safer for firefighters, along with preventing unnecessary structural damage, Hendricks said.

“If we can deploy an aircraft, we’re not breaking down doors that these people need to come home to,” the chief said.

• The district assisted in July on a call to the Crestwood Fire Department by Grant’s Farm for fast-moving water during flash flooding, where it was feared that people might be caught in the water in Whitecliff Park. Hendricks said that the flood waters were too dangerous to send his firefighters into even if someone had floated down the water past them. But with a drone, a raft could be dropped to the victims from the drone’s “payload drop device” until firefighters could rescue them. The raft can hold up to three people.

• In case of a disaster like a train derailment, which happened in the MFPD area in 2017, the drone could be sent along the length of the derailment for firefighters to figure out if any victims were trapped or what kind of hazardous substances were leaking.

In the case of the train that derailed over Interstate 55, the derailment was at least a mile long and a difficult scene to work with without knowing the full scope of damage and derailment. With a drone, the district would have known right away exactly how to handle the derailment.

• Civil disturbances. The MFPD area does not see many of what the fire district called “civil disturbances,” but LaFata gave an actual example of the Ferguson protests held at South County Center mall on Black Friday 2014, when protesters marched through the mall chanting.

If a protest like that was to happen again and the fire district had a drone, the unmanned flyer could be easily sent up to see how extensive the scene was and tell officials what they were dealing with in terms of safety, LaFata noted.

• Car crashes. In the case of a person ejected from a car, overgrown brush can sometimes be difficult to search to find a person, or at least slow the search down.

But with a drone searching overhead and showing the heat signatures of any victims, lives could be saved and treatment given faster, LaFata said.