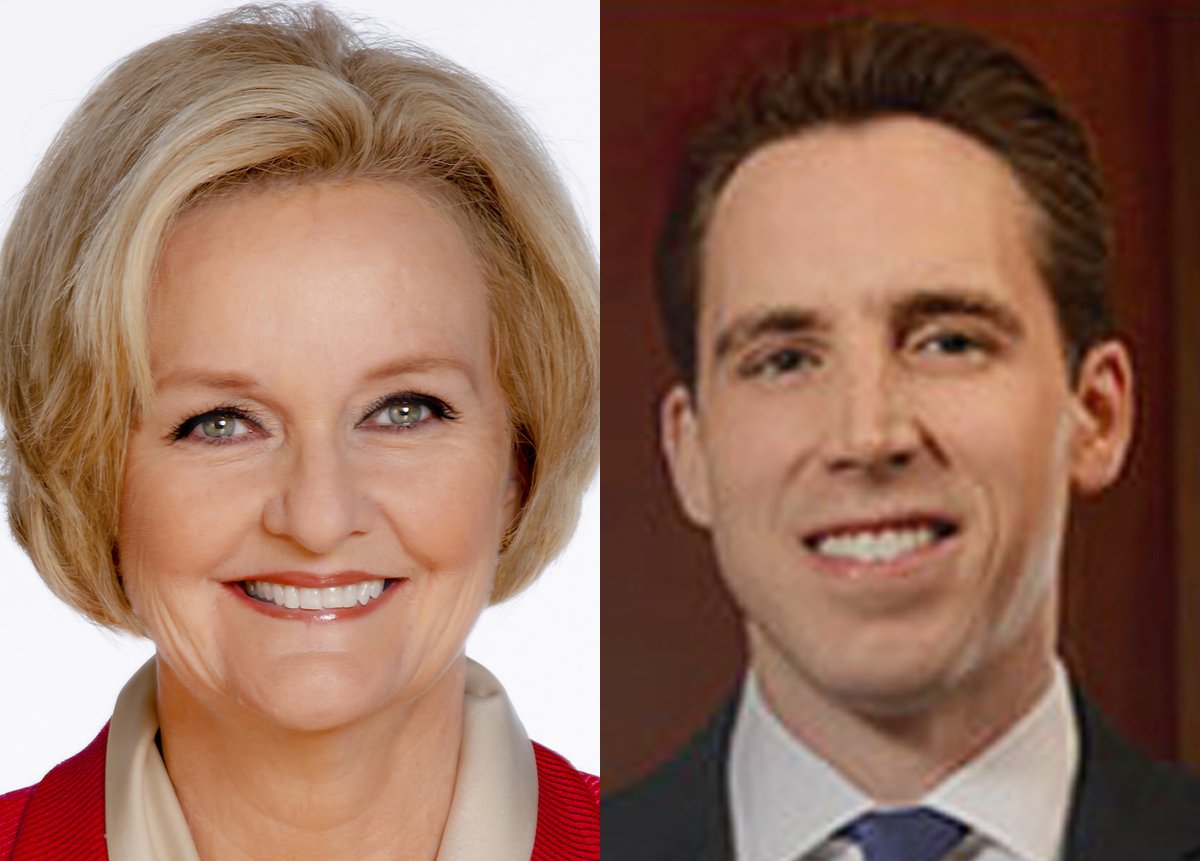 Hawley, Campbell and Crain did not respond to a Call questionnaire.

McCaskill, 65, 1941 Spring House Drive, Kirkwood, is married to Joseph Shepard and has three children. She is running for her third term in the U.S. Senate.

McCaskill graduated from the University of Missouri where she earned both her undergraduate degree and law degree.

When asked why she was seeking another term, McCaskill said, “To continue listening to Missourians and working across the aisle to get things done for our state.”

O’Dear, 61, 4516 N. Mulberry Drive, Kansas City, is the father of three children in college and high school. He is a practicing lawyer with Bryan Cave Leighton Paisner LLP.

“We need independent leadership in the U.S. Senate to move past the hyperpartisanship and break up the division and gridlock,” O’Dear said on why he was running for office.

What issue do you consider to be the single most important issue in this race and why?

McCaskill said, “One of the issues that I hear about most from Missourians is the importance of maintaining protections for people with pre-existing conditions. While I have fought to maintain these protections, my opponent (Hawley) has filed a lawsuit to take those protections away.”

O’Dear said, “Health care is a fundamental human necessity. In America, we spend twice as much per capita on health care with outcomes no better than many other countries.”

McCaskill said, “I have spoken out against the administration’s trade war that is hurting Missouri farmers, ranchers and manufacturers, while my opponent (Hawley) has endorsed that trade war.

“I stood with workers in opposing the right-to-work-for-less initiative, and I support raising the minimum wage to help hardworking Missourians make ends meet. Meanwhile, my opponent stood with bosses in the board room by supporting Prop A and opposes the minimum wage.

O’Dear said, “There is a growing imbalance in economic opportunity, income and wealth in America. We need to address this issue, not by pulling down successful people, but by helping others climb the ladder of success. Missourians should have access to affordable high-speed internet. Increased broadband access would lead to substantial economic growth.”

McCaskill said, “I agree with the majority of Missourians who believe that we should work to lower the number of abortions, which is why I strongly support access to contraceptives and I believe that all women have the right to make their own health care decisions.”

O’Dear said, “Through education, comprehensive dialogue and the recognition that this is a complex issues with no easy solution, we can establish options for women that respect sanctity of life while also safeguarding their rights over their bodies and lives.”

McCaskill said, “I believe that there are some crimes so heinous as to warrant the death penalty and that the death penalty should be used in limited circumstances, when the quality and quantity of evidence is extraordinarily beyond a reasonable doubt.”

McCaskill said, “I strongly oppose privatizing Social Security and have fought Republican budget cuts to the program. I have also worked to strengthen Social Security and ensure that seniors can receive the benefits that they have earned and deserve. To increase solvency of this program, I also support raising the cap on Social Security taxes so that wealthier Americans pay their fair share.”

Are tougher gun control laws needed? If so, what do you propose? If not, why?

What do you propose to solve funding problems facing public education? Do you support school vouchers?

McCaskill said, “I believe that all students deserve access to a quality public education, and we should provide more resources for the public school system to fulfill that mission. I do not support sending public tax dollars to private, for-profit schools.”

What can be done to stabilize the cost of gasoline to citizens? Should we explore alternative energy sources?

O’Dear said, “Our country should promote environmental protection as an opportunity rather than hindrance to business. We should champion alternative solutions that help create a sustainable source of energy with minimal impact to the environment.”

McCaskill said, “I have consistently supported shifting to alternative energy sources to reduce dependence on foreign oil, and I have supported the ethanol tax credit.”

O’Dear said, “We must balance the budget and control the national debt. We must decide our priorities and then we must make the difficult but necessary decisions to raise revenue to fund the level of spending we, on a bipartisan basis, decide to support.”

McCaskill said, “While I have consistently worked across the aisle to lower taxes for the middle class and small businesses, I opposed the recent Republican tax bill that was a giveaway to pharmaceutical companies and wealthy corporate executives at the expense of hardworking Missourians. I partnered with Republican Sen. Susan Collins to write the bipartisan Jobs Creation Act to expand tax cuts for small businesses and hardworking Americans, and I believe we should pass that bill. I also worked with Republican Sen. Rob Portman to pass major bipartisan permitting reform to boost jobs and business opportunities.”

What measures, if any, will you propose to encourage economic development in this area?

O’Dear said, “Use the same principles that created the interstate system to expand high speed internet infrastructure to rural Missouri and all corners of the U.S. Partner with private industry to create programs that pull urban center populations out of poverty.”

McCaskill said, “In addition to the bipartisan Jobs Creative Act that I introduced with Senator Collins, I supported the Small Business Jobs Act to help bolster job-creation through tax cuts and helped pass the VOW to Hire Heroes Act, which provided tax credits to employers hiring veterans.”

McCaskill said, “As Ranking Member of the Senate Homeland Security and Governmental Affairs Committee, I have worked to balance national security with concerns about civil liberties. On issues such as the use of drones, I have sought to ensure that reasonable limits on the government’s authority are in place. But I also strongly believe that we must secure our borders and keep American safe, which is why I have worked to ensure that the Border Patrol have the resources they need.”

Should “ObamaCare” be repealed? What do you propose to increase access to quality, affordable health care and to help reduce the cost of prescription drugs for the elderly? How would you fund any proposals you have?

O’Dear said, “We must work toward a more effective and efficient business model in healthcare, and toward a lower rate. Shift the discussion from health insurance premiums to the actual cost of healthcare, and promote the importance of stabilizing the healthcare system. Demand innovation in healthcare to provide better outcomes and lower costs for the American people.

McCaskill said, “I support fixing and improving the Affordable Care Act to ensure that all Missourians can afford and access coverage. I have worked across the aisle to strengthen our health care system, including co-sponsoring bipartisan legislation to offer Americans in markets with no other viable options the same health insurance that members of Congress have and introducing legislation to increase generics and lower the cost of prescription drugs. I also believe that we must maintain protections for people with pre-existing conditions and continue to work to lower the cost of prescription drugs — while my opponent is suing to take pre-existing condition protections away and raise the cost of prescriptions for some seniors.”

Should U.S. troops be withdrawn from Afghanistan? If so, what plan would you propose? If not, why not?

McCaskill said, “I trust General Mattis and our military leaders to give candid advice, but I believe we should only stay in Afghanistan as long as we are contributing to the peace and security mission. I have focused on preventing contracting abuses and limiting unaccountable sums of money on projects that cannot be secured.”

Will you hold town halls in St. Louis if elected?

McCaskill said, “I held over 50 town halls in just over a year where any Missourian was welcome to come and ask me any question, including St. Louis. I anticipate holding additional town halls in the future.”

Are you willing to debate your opponent?

McCaskill said, “I have already held one debate with my opponent and look forward to our additionally agreed upon debates.”

Do you think the country is moving in the right direction under President Donald Trump?

McCaskill said, “While President Trump has signed over 30 pieces of legislation that i have helped to draft, sponsored, or cosponsored, I have also stood up to this Administration when I think it is right for Missouri.

Do you think that the federal government should be open and transparent with the people’s business?

McCaskill said, “Yes, I believe the federal government should be open and transparent, which is why I have fought for measures to increase transparency in the regulatory process, introduced legislation to increase disclosure of campaign contributions, and conducted several major investigations into allegations of mismanagement and corruption in the federal government, including a six-year fight to rein in wasteful wartime contracting practices in Iraq and Afghanistan.”

What is your opinion of proposed newsprint tariffs and what do you plan to do about them?

McCaskill said, “I strongly opposed newsprint tariffs and joined a bipartisan push to halt these excessive taxes on paper imports that are critical to Missouri’s newspaper and printing industries.”

What is your opinion of President Trump’s additional tariffs?

O’Dear said, “Tariffs are being used as a blunt instrument and are hurting innocent Missouri farmers. Free trade has lifted millions out of poverty. We must work with Mexico, Canada and the EU to put pressure on China, not continue to alienate our allies.”

McCaskill said, “I strongly oppose the Administration’s trade war that has hurt Missouri farmers, ranchers, and manufacturers and already costs hundreds of Missourians their jobs.”

Do you support building a border wall?

O’Dear said, “Securing the border with 2,000 mile, 30-foot wall is not a resolution. Probably can’t be built. Anyone who believe it can has probably not litigated rights to build on someone else’s land.”

McCaskill said, “I have worked across the aisle to strengthen border security and keep Missourians sage – which is why I have been endorsed by the National Border Patrol Council. I have co-sponsored legislation to provide $600 million for border security and introduced a bill to allow the hiring of 1,000 new Border Patrol agents. I also introduced an amendment that would require Customs and Border Protection to hire 500 additional officers per year and provide additional funding for those hires until they meet their staffing needs. I believe that we must do more to secure the border and I support increasing resources for the Border Patrol, but I do not believe a border wall from sea-to-sea is practical.”