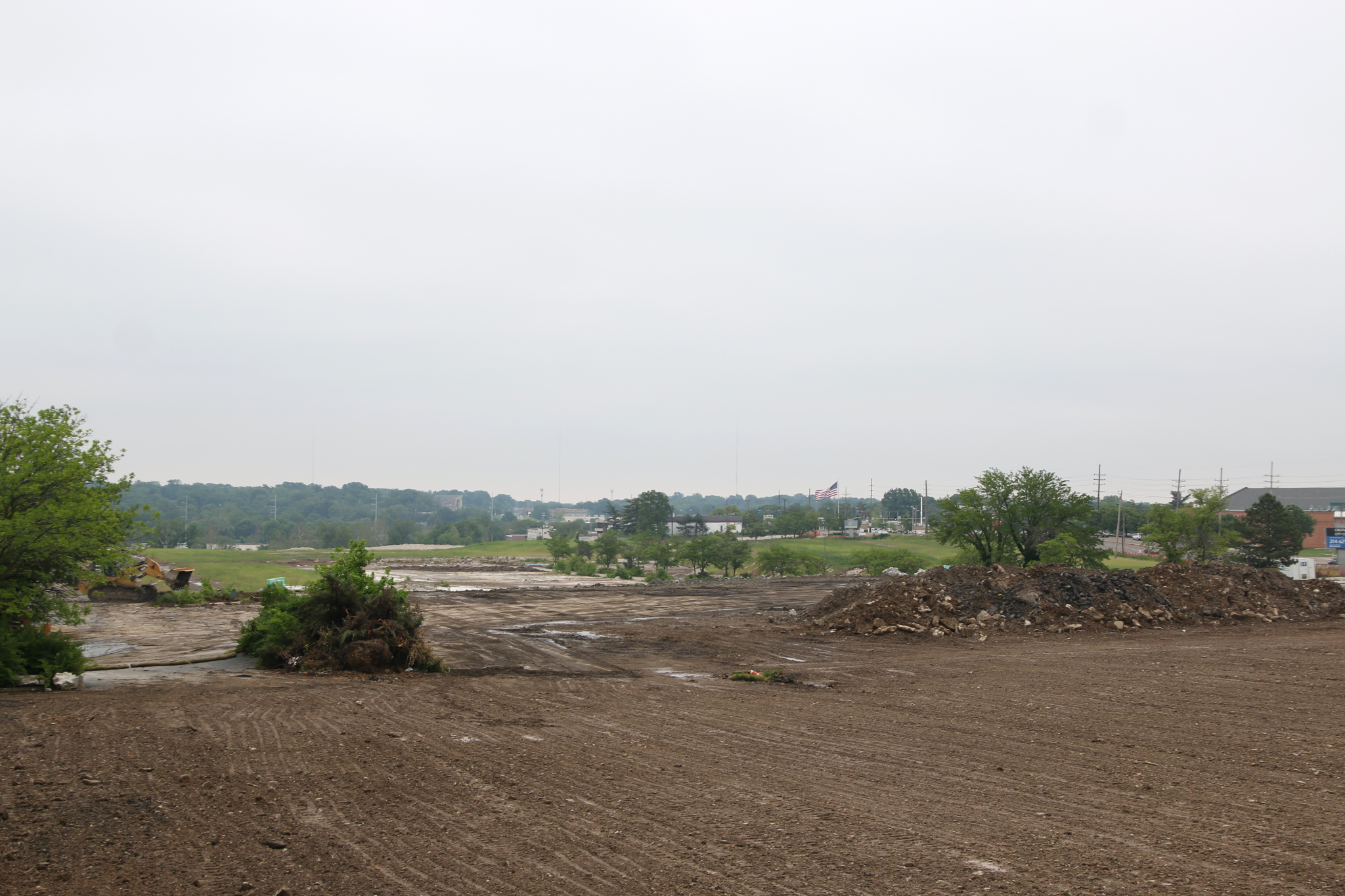 The Crestwood mall site along the Sappington Road/Detjen Drive entrance that used to be a parking lot now is covered with dirt, pictured above, as seen May 21, 2019. More dirt will soon return to the site. Photo by Jessica Belle Kramer.

Dirt is being trucked back into the Crestwood mall site after the Crestwood Board of Aldermen granted developer Walpert Properties Inc. a temporary grading permit March 26 to move 40,000 cubic yards of off-site fill to four acres on the southwestern section of the property.

Mounds of dirt were leveled to bring the mall site up to grade with Watson Road last year, after city residents objected to the huge mounds that came to be called “Mount Crestwood.”

Now, more than 4,000 truckloads of dirt are expected to be deposited at the site. The process, which began at the end of April, could take as long as six months. The dirt will come from the Metropolitan St. Louis Sewer District’s new Gravois Trunk Sanitary Storage Facility at 8645 Pardee Lane.

The 47-acre former site of the Crestwood Plaza mall at Watson and Sappington roads could be the location of a redevelopment plan topping $100 million.

The site is still owned by Chicago-based UrbanStreet Group, which tried and failed to develop the site for the last three years. Now the land is under contract to Creve Coeur-based Walpert with the contingency that Walpert can sign up enough tenants.

City Administrator Kris Simpson said that traditionally grading permits are only granted after site plans are approved for a project. But since Walpert Properties had the opportunity to receive the fill at a cost-effective rate, city staff felt it was in the city’s best interest to issue a temporary grading permit.

“Obviously we had the concern with Mount Crestwood that we dealt with last year, and in discussions with the applicant and the contractor… they agreed to grade the fill as it is brought in… so it won’t ever be stockpiled,” said Simpson. “It’ll be brought in and smoothed, and we felt that would be something that is acceptable.”

Walpert Properties Director of Development Kent Evans explained to the aldermen at the March 26 board meeting that the four acres where the dirt will be deposited had a significant drop-off and an 80-foot elevation change.

“We could bring in as much dirt as we possibly could get,” said Evans. “On the western end we’re talking to some users, and everyone is concerned about being below grade.”

The dirt will be used to bring that portion of the property up to grade.

Evans added that “there will be no mountains, no molehills” and that the dirt, which is clean fill, will be seeded to grow green until development. The dirt will be delivered off Sappington Road onto the old Macy’s site. The Crestwood Planning and Zoning Commission recommended approval of the grading permit at its March 13 meeting, but required that the petitioner provide a $100,000 surety amount.