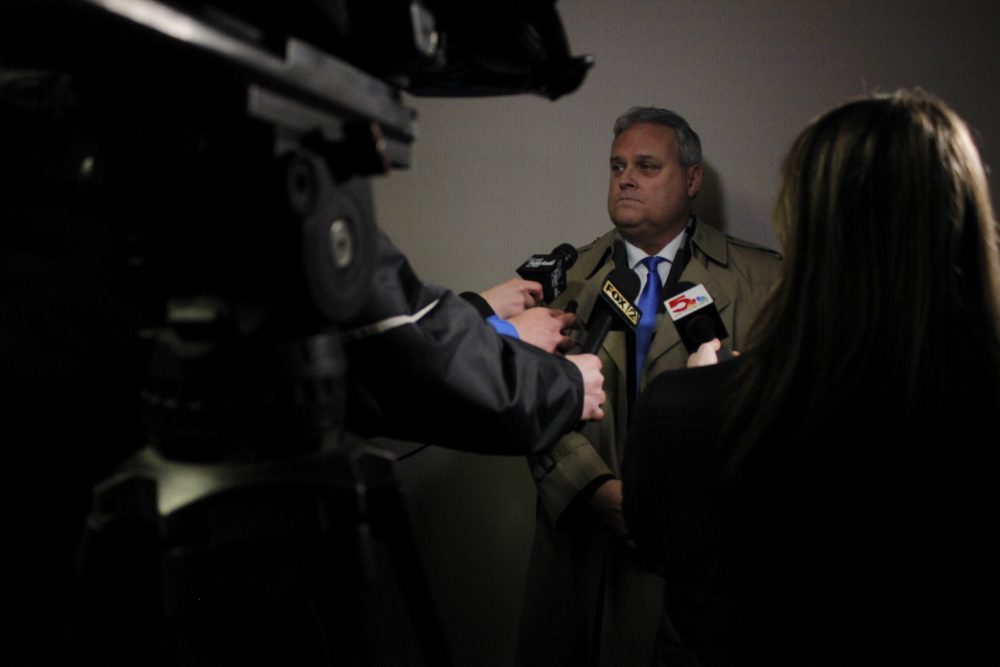 Pictured above: 3rd District Councilman Tim Fitch takes questions from reporters after being sworn into office on Tuesday, Jan. 1, 2019. Fitch said that a primary focus of his during his time in office will be public safety. Photo by Erin Achenbach.

In an effort to prevent future corruption, St. Louis County will set up a whistleblower hotline that will anonymously take reports of wrongdoing from county employees, with protection granted so that they can’t be fired.

It’s another step in the effort to safeguard the county from a scheme like that run by former County Executive Steve Stenger, who took advantage of the way county government worked to exchange campaign donations for county contracts. He pleaded guilty to three federal corruption charges and starts serving a four-year prison term Sept. 21.

Under legislation the County Council unanimously passed and County Executive Sam Page signed last week, the county will go out for bids on a new fraud hotline to replace its existing one, and this time the county will seek to safeguard the anonymity of callers.

Under the bill, which is sponsored by 3rd District Councilman Tim Fitch, R-Fenton, county whistleblowers would get protection from firing or punishment for pointing out fraud. Members of the public could also call in, including contractors or bidders on contracts.

“Our employees should have an outlet to go to which we don’t have right now,” Fitch said before the bill was passed. “We don’t have a true ethics hotline or Whistleblower Protection Act.”

The cost of the hotline is unknown since the county will have to go out to bid to find a company to operate the line, which will operate 24 hours a day, seven days a week and take tips by phone, email and fax.

And instead of going to the county auditor like the county’s current fraud hotline, the new hotline will go directly to both the County Council and the county executive.

Fitch said he asked around after Stenger’s indictment in April to find out why employees had not reported him to the existing fraud hotline.

Stenger resigned April 29, immediately after the indictment was unsealed.

Stenger, a Democrat, was ultimately brought down by three separate schemes he concocted with his quarterly campaign donor, businessman John Rallo. One of the pair’s first schemes to get county money to Rallo was unsuccessful, but they later succeeded in exploiting the county Port Authority and Economic Development Partnership through Partnership CEO Sheila Sweeney to direct a phony $130,000 marketing contract to Rallo’s company. Sweeney also worked with Rallo so that he would be the low bidder on two industrial parcels of land he wanted to buy in Wellston for one of his businesses.

But Stenger and Rallo’s first scheme failed, as outlined in the indictment. Stenger wanted to direct a county insurance contract to Rallo’s insurance company, but then-Director of Administration Pamela Reitz repeatedly balked at giving him the contract. Instead, she wanted to go through an insurance committee and examine other bidders. Stenger said in text messages to his staff that he would fire Reitz if she didn’t do what he wanted.

Eventually, Stenger dropped his efforts to force the Rallo contract through the administrative department and turned to Sweeney and the Port Authority instead, since he could better control them. Reitz later left the county to take a position in Town and Country city government.

Although Stenger’s attorney Scott Rosenblum argued in court at Stenger’s sentencing that no one from the county was actually fired despite his threats, council members believe that Reitz was forced out by Stenger’s corruption. The crowd at the council meeting gave her a standing ovation when she retired, which is unprecedented in recent county history.

But Reitz never called the county auditor’s fraud hotline to report his undue influence over her and county financial decisions. No employee ever did, Fitch said he found out when he investigated after Stenger’s guilty plea in May.

“It was interesting to ask that question,” Fitch said. “I said to (county Auditor Mark Tucker), during this whole issue with the whole procurement process and the whole bidding process with Steve Stenger and all the misdeeds that were going on, did any of our employees that were involved in this call the hotline and report that this was going on? And they didn’t. He said no.”

To hire Tucker in 2017, the council fired the previous county auditor, who was a certified public accountant, and hired Tucker, who had no direct auditing experience as called for in the county Charter. Stenger dubbed Tucker the “frauditor” because he said the new auditor could not conduct audits.

With the county politics surrounding Tucker himself and the fact that the auditor is a political appointee of the council, employees might not have felt comfortable reporting events surrounding Stenger to him, Fitch said.

“The way it is now, the only place employees have to go is the fraud hotline that Mark Tucker staffs,” said Fitch, who took office Jan. 1.

That’s why Fitch wanted the new hotline to go to both branches.

“That way one branch can’t cover for the other,” he said.

But 6th District Councilman Ernie Trakas, R-Oakville, said that while he agreed with Fitch’s concerns about the fraud tips only going to one branch of government, he understood why employees would be hesitant to come forward.

“When you’re dealing with Robespierre, you’ve got to be real careful about who you talk to,” Trakas said, comparing Stenger to Maximilien Robespierre, the French revolutionary who ruled with an iron fist.

Another reason employees may not have come forward to the previous hotline is that they weren’t convinced that it would be anonymous.

Then-County Clerk Genevieve Frank said at the council’s July 30 caucus that several employees had come to her “asking for a friend” whether the hotline showed their phone numbers on caller ID or on voicemail messages, as other county voicemail systems do. Frank asked around, but could never get a final answer.

“Saying somebody’s protected by a whistleblower ordinance and having them believe it are two different things,” Trakas agreed.

He asked the county counselor’s office to look into what the best practices are for whistleblower hotlines and how the county should set one up to inspire trust in those turning to it to report fraud.

Fitch said one thing he doesn’t want the whistleblower hotline to be is a “for lack of a better term, ‘whine line’” for employees who are upset if, for example, their bosses don’t let them have days off at Christmas.