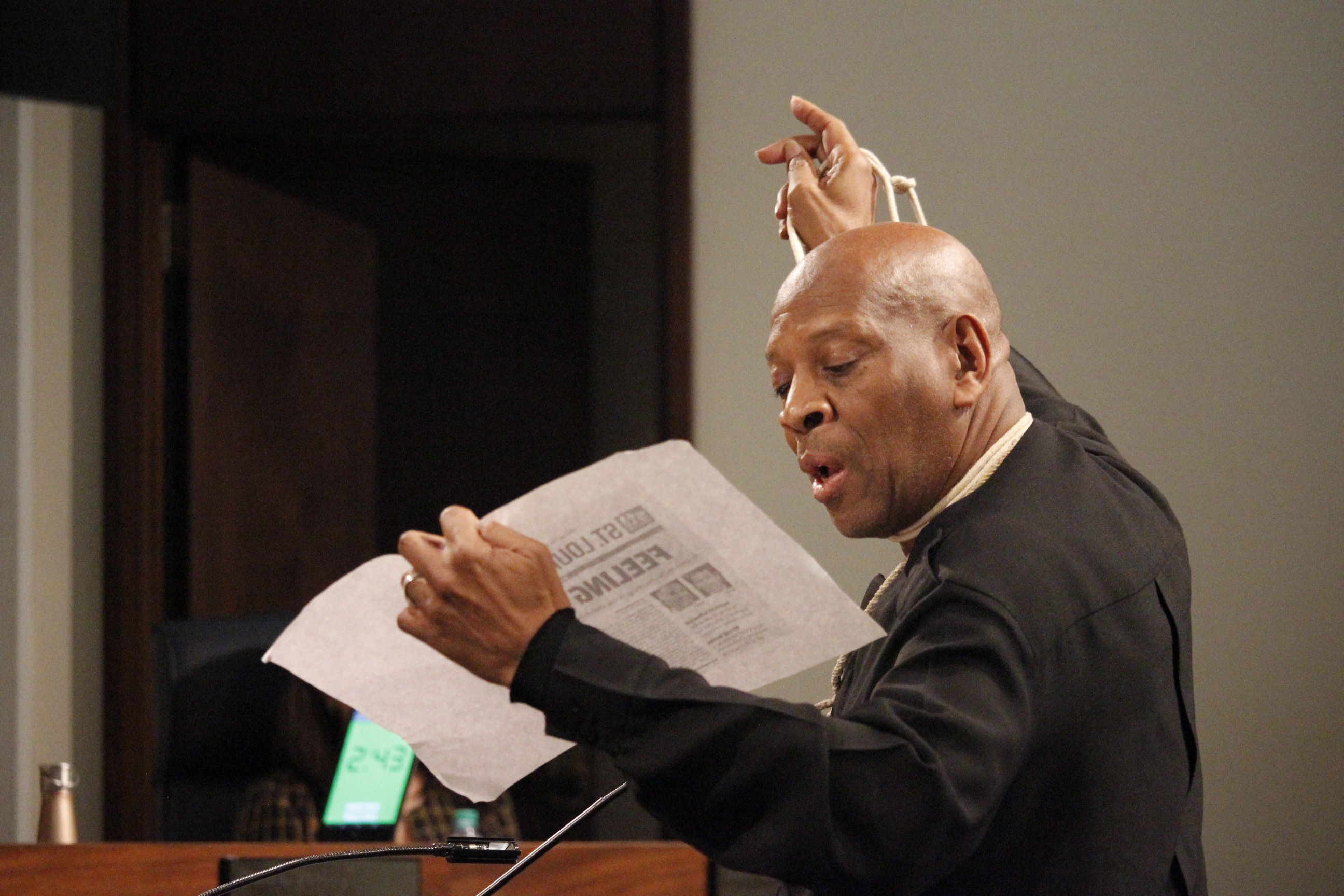 After two weeks of intense public comments at the St. Louis County Council, Presiding Officer Ernie Trakas and the council hope to minimize “activism” during the meetings by imposing new rules and enforcing existing ones on residents and the media.

For two weeks in a row, the council has moved the public comments from the beginning of the meeting to the end — after that night’s business has already been conducted.

Along with added security in the form of about 10 more county police officers, Trakas debuted what he called “basic ground rules” at the Nov. 12 meeting, along with a rope barrier between the podium and the crowd that county police officers lift to allow public speakers to get to the front and address the council. Some of the rules already existed, such as enforcing a three-minute time limit.

But some were new: Residents are not able to move around to take photos or video, as they have always been allowed to do, and the media is confined to a “designated area” of the press box, with photographers and reporters unable to move to the aisle or get closer to take photos.

Trakas noted that some public bodies don’t take any public comments, including the St. Louis Board of Aldermen.

Presenting the rules at that meeting, Trakas said, “For the past several weeks there has been a lot of emotion and passion displayed. After last week’s meeting, several people expressed concern about their own safety and about decorum during the public forum portion of the council meeting. People feel intimidated and afraid to express their viewpoints because of the disparaging, threatening and condescending comments from members of the audience.”

The 6th District councilman told The Call that there were no specific threats that prompted the added security measures and changes to public comments, but he wants to create an atmosphere that limits activism and makes everyone feel safe to speak, showing the community an “enlightened, tolerant, participatory democracy.”

“It’s not like I’m trying to cut off somebody’s right to address the council, but this idea that we’re going to use it as a forum for activism is a different idea altogether,” Trakas said. “When you infringe on the rights of others, the First Amendment doesn’t protect that.”

Trakas said since the two meetings after the changes have been calm, it proves that his ideas are working.

But demonstrations at the Oct. 28 and Nov. 5 meetings were led by activist Anthony Shahid, who didn’t attend Nov. 12 and 19 when Trakas’ changes went into effect. He has attended in the past to protest events in Ferguson and a firebombing in South County linked to a drug dealer who received letters of support from former County Executive Steve Stenger and police Chief Jon Belmar.

This time, Shahid is with a group of citizens who are arguing that a police officer should be fired because, they say, he stopped a 63-year-old black woman in North County for no reason and mistreated her to the point of molesting her. The woman has also been appearing with the group, begging for the council to fire the officer.

To protest what he sees as police brutality toward African Americans, Shahid “took a knee” during his comments the first week he spoke on the issue, joined by fellow activist Zaki Baruti kneeling by the podium in front of the council. The next week, Shahid held a noose around his neck and stomped on the U.S. flag in protest.

“Thank God you’re in a country that allows you to do that,” Trakas said.

But with Shahid absent from the last two meetings, several of the commenters speaking at the council meeting last week said they felt the changes to public comment were an attempt to silence them.

Oakville resident Angie Zorich, who was paid $750,000 by the county to settle a federal lawsuit she filed after the St. Louis County Police Department SWAT team shot and killed her dog, said she is a constituent of Trakas and had not gotten a call back from him after leaving messages for him three times.

“Right now I feel threatened by reciting things about the city government, they don’t even let people speak,” Zorich said. “Is that the goal here, to push us off to the end and maybe push us off altogether? Is that the end, that you don’t even want to hear what our problems are?”

Longtime county observer Tom Sullivan, who has attended every council meeting for decades to comment on county business, objected to moving the comments to the end because it “shows contempt for the public you’re supposed to be serving.”

Clancy said she has never felt threatened and feels listening to comments is part of her job. She is concerned about the message the changes send, noting that even as Affton residents came to council meetings for 18 months to “Save Tower Tee,” public comments were never moved.

“I’m concerned that it has the impact of potentially silencing members of the public,” she said. “I expect to get called out personally — I’m an elected official.”

Trakas said he met with County Counselor Beth Orwick and the police captain who is in charge of security for council meetings to develop rules intended to bring “structure and order to meetings,” specifically citing “demonstrations” by citizens who attended the meeting to protest police brutality and also the dozens of animal shelter volunteers who attended the same two meetings to protest the county’s treatment of them and the shelter dogs.

He said there were no specific threats, but the police captain approached him to say something needed to be done.

At the last council meeting it was allowed, Nov. 5, a Call reporter attended the meeting to take photos and stood in the aisles to get better angles, just as reporters and photographers have for decades.

“The idea of people moving around with cameras when I’ve got a full council meeting… for safety reasons I thought that was necessary” to restrict, Trakas said. “And frankly I’d be real honest with you, that is another element that has been abused in my opinion by the media.”

But he thought the new rules worked, with no outbursts even though “virtually the same people who had been demonstrative for the last two weeks were present, police and animal control,” he said.