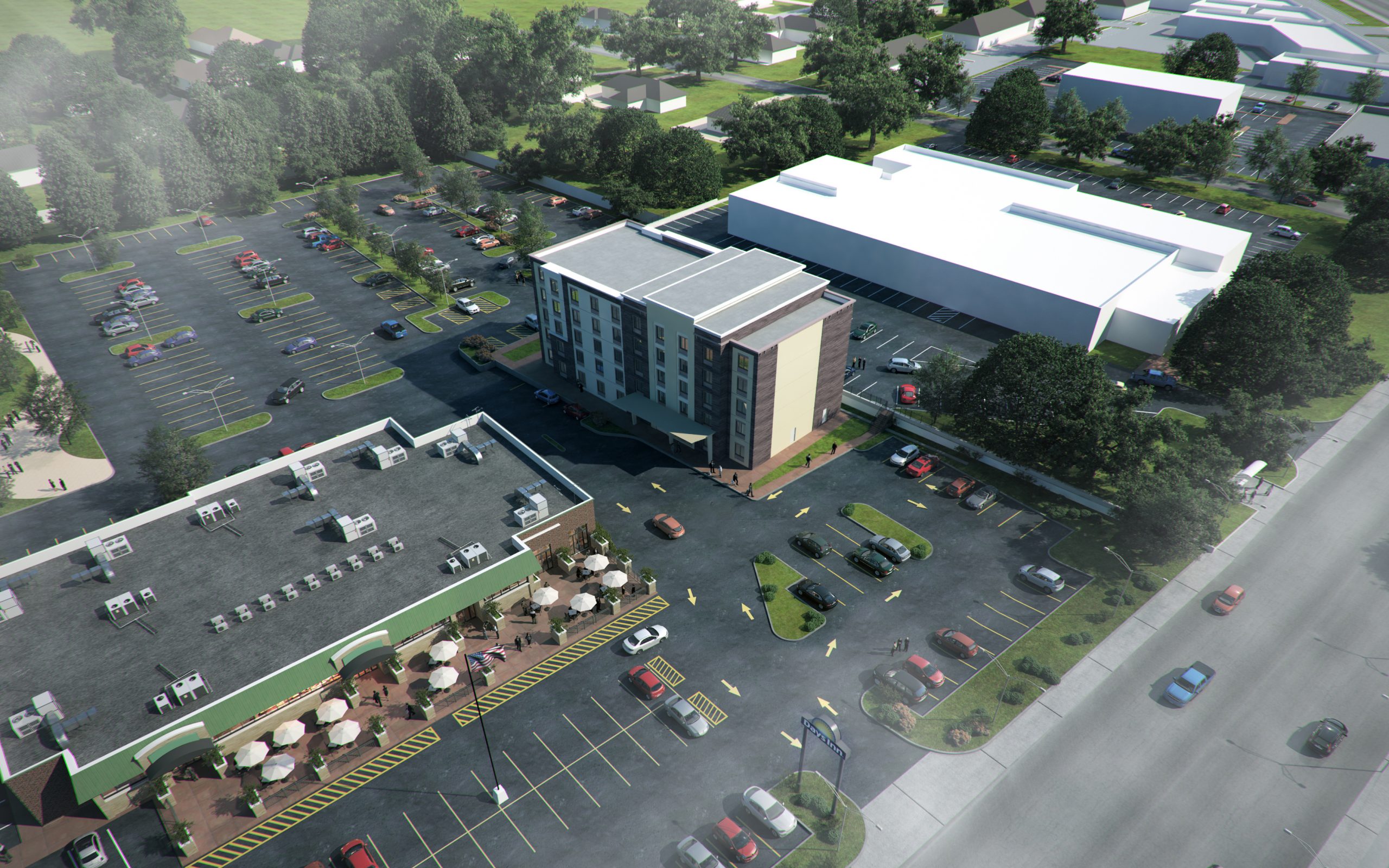 Pictured above: An aerial rendering of the proposed redevelopment, with Helen Fitzgerald’s and a new 5-story Comfort Suites hotel. The Days Inn at the current location will be demolished.

Sunset Hills will be getting its first new hotel in over a decade as construction on the new 5-story $7.4 million Comfort Suites hotel — the former Days Inn at 3654 S. Lindbergh Blvd. — is slated to finish in October. But the new development could now come with a tax-incentive price tag.

At the Jan. 14 Sunset Hills Board of Aldermen meeting, Laura Lashley, a principal with Development Dynamics, an economic development firm, told the board she hopes this is just phase 1 of a joint project between the hotel owner, Helen Fitzgerald’s and the city. The next phases could include a 7-story Hilton hotel and 2-story parking garage.

Unlike past presentations to the city, developer HR Sheevam is now seeking a “tax stabilization” freezing the current value of his property in response to rising 2019 property assessments.

The delay in construction on the Comfort Suites was due to permitting, Lashley said.

“That really held up the flow of things quickly,” she said. “But once the final permit from the fire district was secured in September of last year, by October he was running.”

The plans for the site, which were in the works for many years, were officially approved by the board in June 2018. Sheevam, owner of the new hotel and the Days Inn that the Comfort Suites is replacing, had lobbied the board to allow him to build a taller hotel since Sunset Hills had a 4-story building limit at the time, before amending city code to increase setbacks and building height allowed. 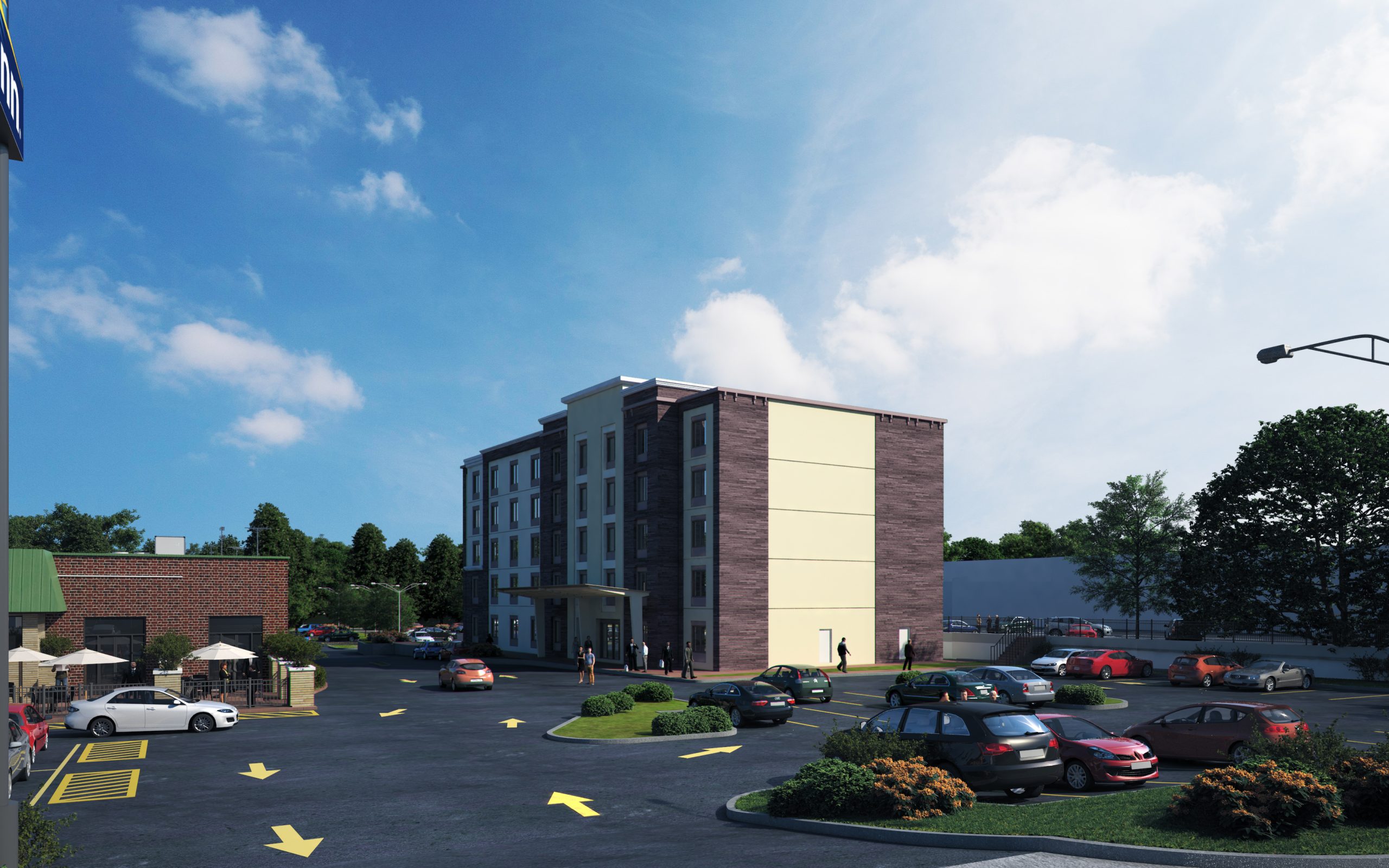 A street-view rendering of the proposed 5-story Comfort Suites.

One of Sheevam’s key selling points while he was asking for approval from the city was that he was not asking for tax incentives. But now he plans to ask for the creation of a Community Improvement District or CID, which is a form of tax incentive for blighted properties that the city has previously granted to city businesses like the now-defunct Johnny Mac’s.

“And that was a building that you guys considered to have nuisance violations and lighting issues. So… if you broke out the land and improvements, those are the two components of your equalized assessed value, the improvement portion alone went up over 200 percent in its assessed value just last year,” said Lashley. “One of the reasons why we bring this to your attention is any time you’re doing an investment, you look at where your risks are for uncontrollable costs and obviously tax is an uncontrollable cost… So what we’re talking about is putting in place a tax stabilization… We’ve had conversations with the school district already and now we’re having conversations with you guys about doing a real-estate tax stabilization.”

The developer is looking for a 25-year tax abatement where the 2019 tax year would be the base, ensuring that taxing districts collect tax as they have in 2019 through the first 10 years, then a 50-percent abatement in years 16 to 25. The subsidy would give “certainty” to the project’s “operational performance,” Lashley said.

The developer also wants to partner with Helen’s to create the CID, which would be funded by an extra sales tax, to fix the mutually bad parking situation at the restaurant and the two new hotels with a parking garage.

“I really think this goes line in line with what the community vision is,” Lashley said about the new parking. “The securing of the Hilton flag comes with some things that have to be done… so I think that it’s important for you guys to realize he (Sheevam) has until October of this year to have the approvals in place to be able to do that Hilton flag product. If he can’t secure what he needs to show them real progress and real success is going to happen, Hilton may pull it and give that flag to someone else… With that joint cooperation, we can give you guys what you want from a city perspective, but he does need some cooperation on your part as well.”

Because it was just a presentation, no action was taken by the board, although Sheevam expects to enter into an agreement with the city in the coming months. The agreement would include a provision that if the Hilton flag is not secured, the abatement would not occur, allowing for a “clawback.”

Ward 1 Alderman Dee Baebler voiced her support of the project, saying that Helen’s is a Sunset Hills staple that needs the support of the city: “We certainly want to help promote the businesses as they want to improve and grow. In talking to some of the major corporations that call Sunset Hills home, they’re sending their corporate visitors to (hotels in) Fenton and are very interested in this project.”