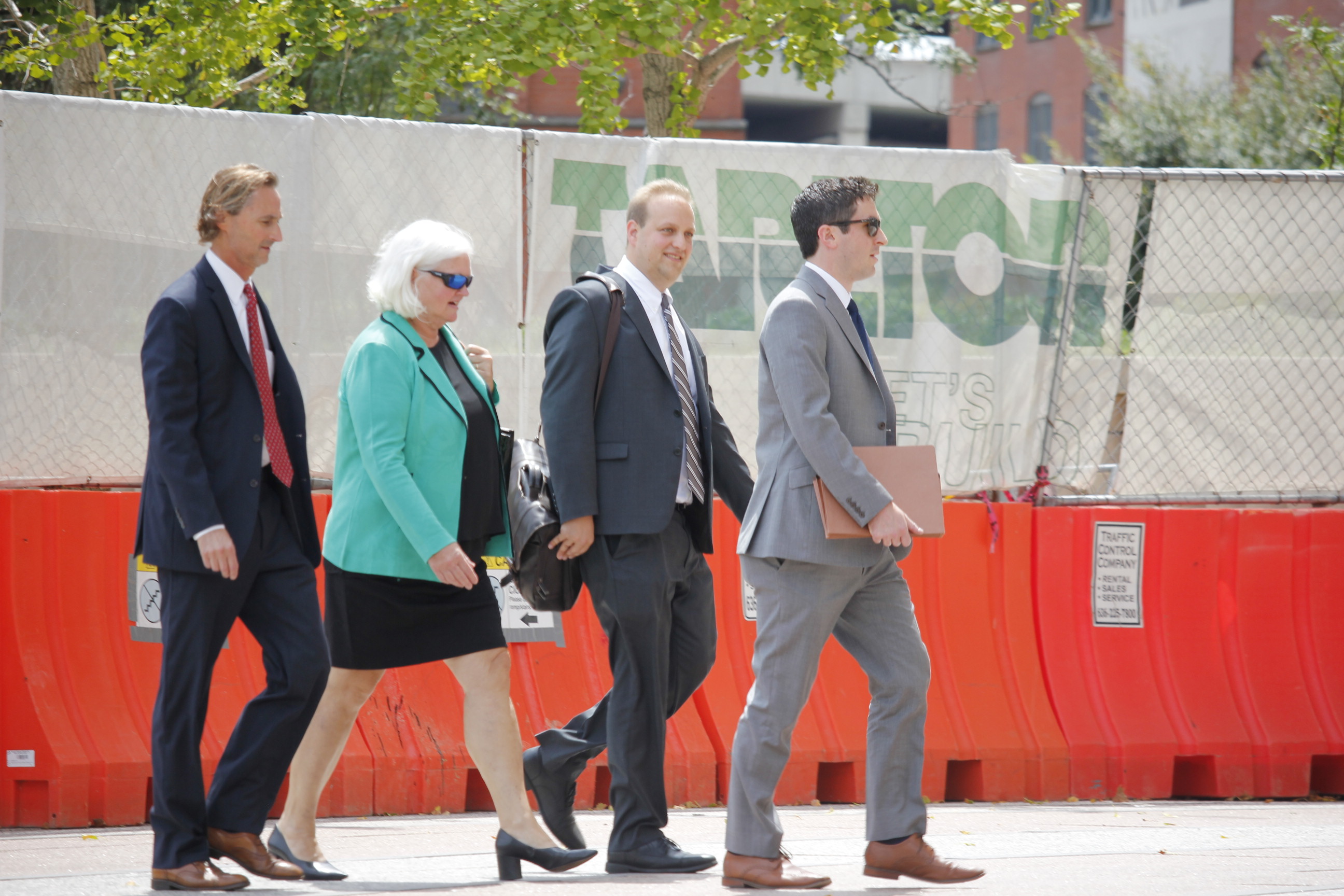 Former St. Louis Economic Development Partnership CEO Sweeney, 62, of Ladue, took a plea deal and pleaded guilty in May to “misprision of a felony,” which is a felony itself and translates, the judge said, to mean that Sweeney both concealed Stenger’s crimes and knew about them and didn’t report them. Stenger also pleaded guilty in May to bribery, theft of honest services and mail fraud, all felonies, and was sentenced to four years in prison last week. 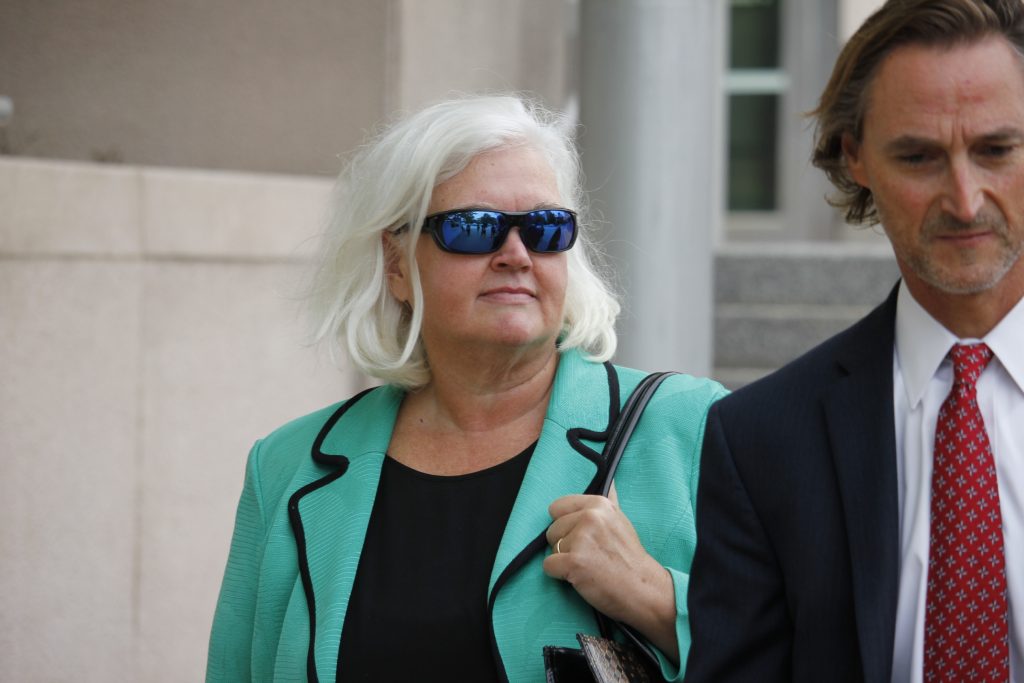 Perry sentenced her to three years of probation, the same $130,000 restitution as Stenger for a phony marketing contract she handed out on his behalf and a $20,000 fine. But Sweeney will not have to pay the restitution since Stenger already paid it.

The former CEO could have received four to 12 months in prison, but prosecutors made no recommendation for specific time behind bars — or any time at all. The maximum penalty was three years in prison and a $250,000 fine.

“Your Honor, I am profoundly sorry for my actions and my inactions.. I blame no one but myself, and I accept full responsibility for my conduct,” Sweeney said. “I stand before you with genuine and very sincere remorse…. I most certainly made a horrible mistake in judgment. I will never, ever repeat it.”

She pledged a life of community service and finished, “I’ll do everything I can to make this right.”

Although Assistant U.S. Attorney Hal Goldsmith noted that Sweeney was guilty of covering up the corruption and “abused the public trust,” he said that of all the people associated with the case, she was the one most personally abused by Stenger. In federal wiretaps, Stenger said that he would fire Sweeney, who he called a “nightmare b—-,” if she didn’t do what he wanted and give certain campaign donors contracts and land deals through the county-funded Economic Partnership and the Port Authority.

“She abused her position of trust to those boards and to the general public, and that contributed to the harm caused by Steve Stenger,” Goldsmith said in a short statement at the sentencing. “That being said, there is no question that this defendant, more than any other individual impacted by Stenger’s criminal schemes, suffered the intimidation, the bullying and the outright threats of Steve Stenger on a regular and constant basis. The name calling alone was so shocking and demeaning and really abusive that I would not include it in any of the government’s public pleadings.”

But even though Sweeney knew it was wrong, she “succumbed” to Stenger’s intimidation and “aided and abetted” him in “concealing his criminal conduct,” Goldsmith said.

Sweeney was hired in 2015 for the position as CEO of the economic development agency, soon after Stenger took office and supposedly after a nationwide search. But he actually hired her because she would do his bidding and give contracts to his donors, as Stenger and Sweeney have both admitted.

In court, Goldsmith appeared to agree with Sweeney and her three attorneys that she will never reoffend. He said that Sweeney “accepted responsibility for her conduct in a way that I would suggest that the majority of defendants who appear before this court do not.”

And although Goldsmith argued last week against giving Stenger a break because he was a first-time offender, was older and was unlikely to reoffend, Sweeney made those same arguments successfully to Perry.

That was the nexus of the argument that Sweeney’s attorney Justin Gelfand made on her behalf in a 10-minute statement to Perry. He said that giving her probation would be “just and merciful” and claimed that her crime was a one-time tarnish on a lifetime of good works and charitable activities that “epitomized benevolence.”

He also noted that she is the primary caregiver for her husband, Bob, who is 79 and in poor health.

Under federal sentencing guidelines, Sweeney was listed as either a 9 or a 10, compared to Stenger’s 21.

Her relatives and friends lined two rows of the courtroom and submitted 62 pages of letters as part of her sentencing memo.

The businessman Stenger demanded she create contracts for, John Rallo, is charged with three counts of theft of honest services bribery and awaits sentencing along with Stenger’s former chief of staff, Bill Miller. They have both pleaded guilty.

Stenger recommended Sweeney as head of the Partnership in August 2015, after he took office as county executive in January 2015. She made more than $500,000 a year in the role, also serving as executive director of the St. Louis County Port Authority and as a board member on the Land Clearance Redevelopment Authority. She was forced out by the board, which Stenger said he controlled, in January after a newspaper report that he was controlling all her decisions.

The Economic Partnership board chairman, Dee Joyner, said at the time, “We looked all over the country and realized the best candidate was right here in St. Louis.”

“Sweeney had knowledge of Stenger’s ongoing bribery scheme, whereby Stenger accepted political donations in exchange for awarding contracts through St. Louis County and the St. Louis Economic Development Partnership and its affiliated organizations,” the U.S. Attorney’s Office said. “Stenger’s scheme deprived the citizens of St. Louis County of their right to the honest services of both Stenger and Sweeney. Knowing of Stenger’s illegal bribery scheme, Sweeney failed to report the criminal conduct to law enforcement. Sweeney also took steps and engaged in conduct to conceal and cover up Stenger’s illegal bribery scheme which allowed Stenger’s scheme to continue undetected for several years.”