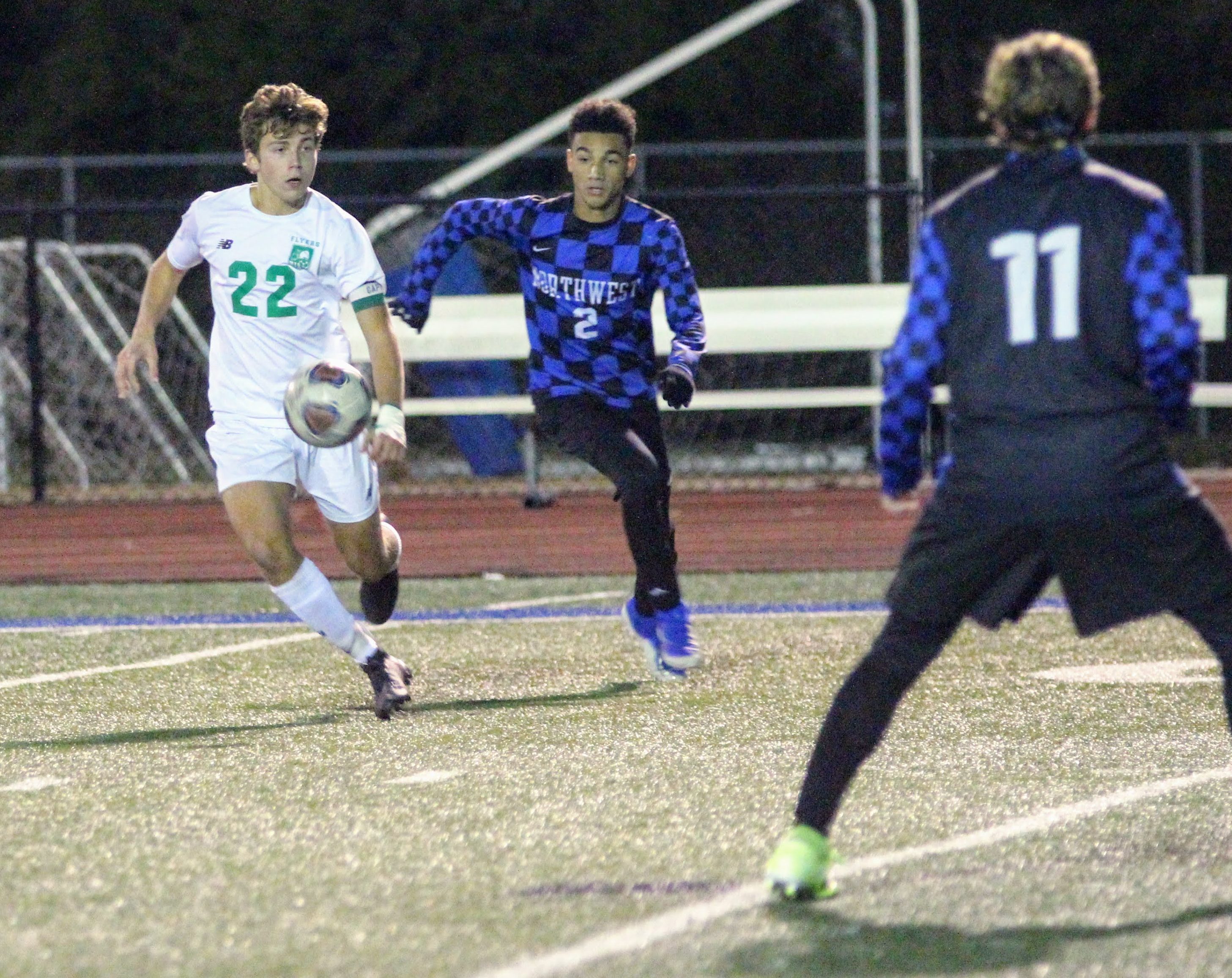 Pictured above: Lindbergh’s Nick Merlo and Northwest’s Hayden Hatley battle for a loose ball in the Flyers’ 4-2 win at Northwest Nov. 13. Photo by Stephen Glover.

This is going down as the season of all seasons for the Lindbergh boys soccer team.

The Flyers (17-8-1) are returning to the Missouri Class 4 semifinals for the first time since 1994 after winning their first district championship since 1998.

“We have been very focused and relaxed after winning the district championship,” Flyers head coach Mark Giesing said. “It seems like we had a huge weight taken off our back.”

Up next for the Flyers is a showdown in the state semifinals versus DeSmet at 3:30 p.m. Friday, Nov. 22, at Soccer Park. DeSmet has won five state championships, with the most recent in 2011.

“DeSmet has got a great attacking team, and we know that we have to come in with our ‘A’ game,” Giesing said. “We’ve got our work cut out for us. But if we play our style of play, I think we can have some success against them.”

Lindbergh’s journey in the playoffs began last Wednesday when they traveled to Northwest in House Springs and posted a dramatic 4-2 come-from-behind win against the Lions.

Chris LiCavoli got the Flyers on the board 1-0 just 11 seconds into the game, with Cole Hutson garnering the assist.

“Chris has been really consistent for us all year long,” Giesing said. “His game has picked up in the postseason because he has tremendous speed and has been able to get in the box a lot.”

Two goals by Northwest’s Hayden Hatley and Austin Jerger put the Flyers down 2-1 midway through the second half of action.

But after several shots to the crossbar and posts, Lindbergh’s Sully Russell evened up the score at 2-2 with Fetiol Hyke getting the assist.

“We had so many close ones that you begin to wonder if it’s not going to be your night,” Giesing said.

“At halftime we didn’t change up anything, we just continued to play possession-style soccer.”

The Flyers took their second lead of the game as Nedim Sarajlilja scored the eventual game-winning goal late in the second half. LiCavoli notched the assist.

“It was a pretty goal, where Chris laid the ball right on him,” Giesing said. “Nedim then had the perfect shot right to the back post.”

LiCavoli nailed down Lindbergh’s final goal of the game as Almir “Ami” Mujcinovic garnered the assist.

“Almir had the initial shot on goal,” Giesing said. “Chris had the followup and put the ball in the net.”

Lindbergh punched its ticket to the state semifinal game with a 1-0 win in the quarterfinals over Kirkwood Saturday, as Hyke scored the lone goal of the game.

This was the third meeting between the Flyers and the Pioneers, who split wins in the regular season.

“We knew going in that they (Kirkwood) are a hardworking, high intensity team,” Giesing said. “I told our guys that we need to only worry about possessing the ball, and I think that took a toll on Kirkwood.”