A one-of-a-kind classic car is still missing after it was stolen from a Fenton hotel earlier this week.

A lime green El Camino that technology company Phoenix Contact sends as a promotion to car shows around the country was stolen from inside a trailer at the Fairfield Inn, 1680 Fenton Business Park Court, Monday night or Tuesday morning, police said. 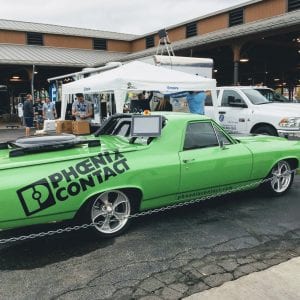 A view of the back of the Phoenix Contact El Camono and some of its technology, as sent out by police.

The car is customized to showcase the company’s industrial technology and is decked out with wireless ethernet, two industrial computers, GPS navigation, twin DVD players, satellite TV, satellite radio, a 32-inch HDTV and a Wii gaming system installed in it, according to Facebook posts.