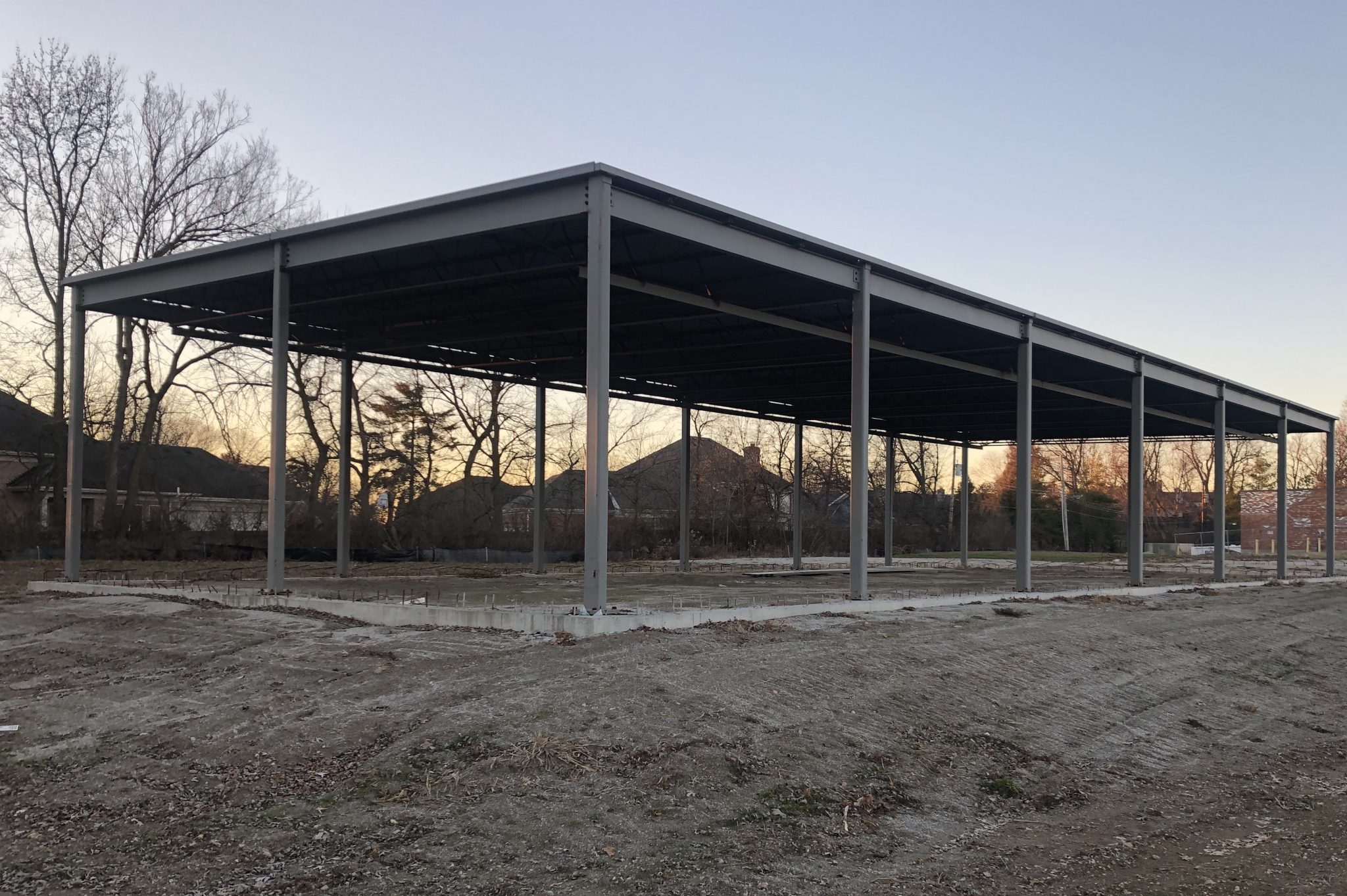 Online update: The Board of Aldermen granted an extension Tuesday to Jimmy John’s owner Steve Saladin, with some caveats. Stay tuned for an updated article and for updates in the Call’s print edition.

Sunset Hills may pay to demolish the partially built structure at the much-disputed site of a proposed new Jimmy John’s, then add a tax lien to the property.

That was the proposal on the agenda for the Board of Aldermen meeting Tuesday — after the Call went to press.

Construction has stalled on the Jimmy John’s since some point in 2017, and the city declared the property a nuisance this fall. City Administrator Eric Sterman is recommending that the city take bids and hire a contractor to demolish the steel structure of the under-construction building at 3751 S. Lindbergh Blvd., at an estimated cost of $25,000 to $30,000 that would be placed as a tax lien on the property. 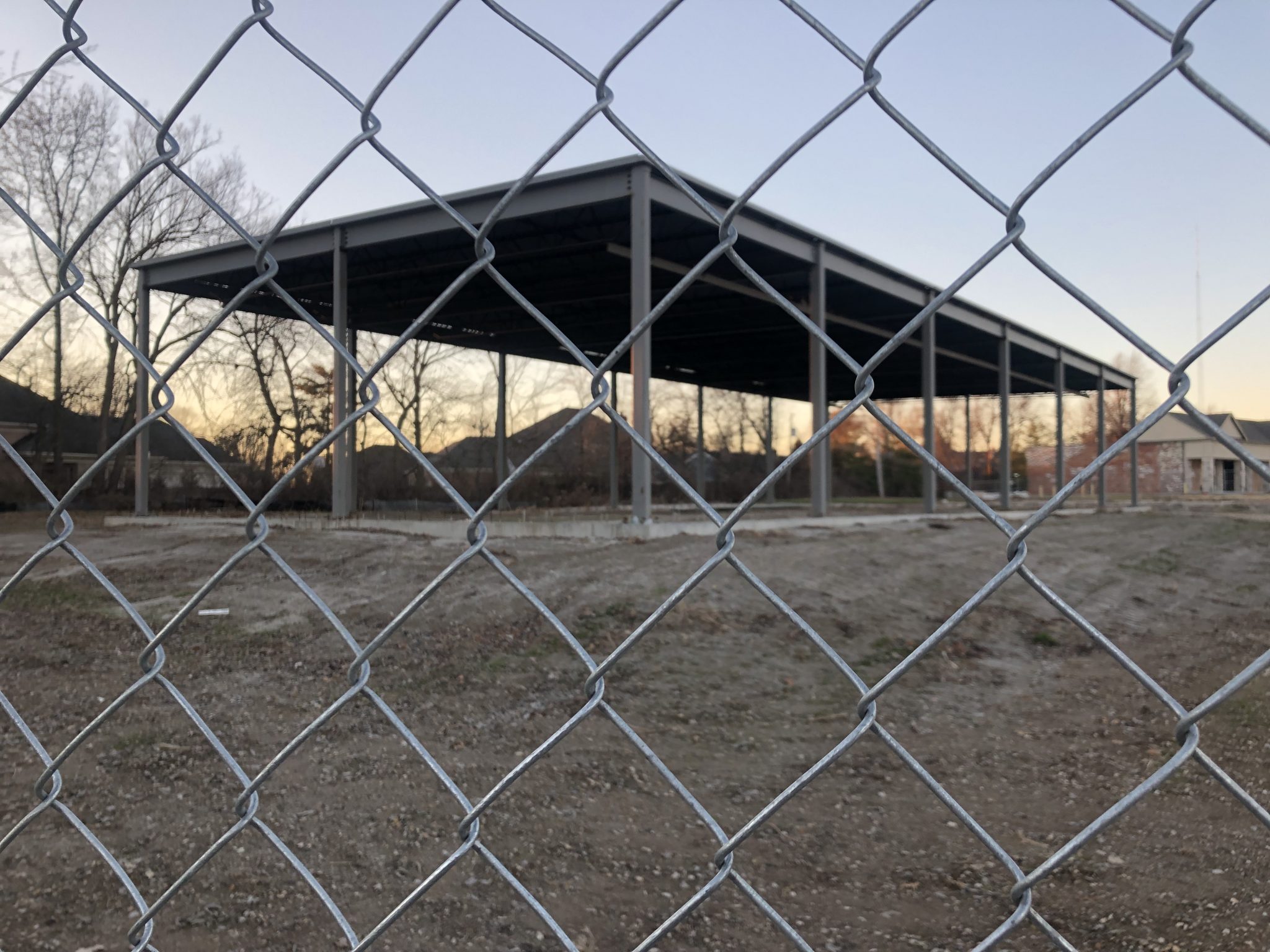 The skeleton of the would-be Jimmy John’s on Tuesday, Jan. 8, 2018. Construction began at the site at 3751 S. Lindbergh Blvd. over a year ago but little progress has been made since. Photo by Erin Achenbach.

But if owner Steve Saladin can show a firm development plan for the site, the city could grant him an extension before demolition, Sterman noted.

The building was set to be the city’s new Jimmy John’s — with a much-disputed drive-thru — after a long city approval process. For nearly a year, Saladin went back and forth with city officials as the Planning and Zoning Commission repeatedly recommended approval of his plan, but aldermen denied it amid an outcry from neighbors on Maret Drive.

The last city officials heard in a board meeting from Saladin, he said in 2017 that he planned to sell the site, splitting a line down the middle after he finished the building and parking lot. The city granted him an amended conditional-use permit, or CUP, in March 2018.

But he never finished the building, and with construction stalled since 2017, the city began pursuing him last summer to finish the project or demolish the steel structure.

Saladin bought the property outright rather than buying it with a contingency based on whether he got zoning approval. At one point during a city meeting, he mentioned that he had spent a large amount of money on attorneys to try to get the zoning for the site.

“He paid way too much for the parcel of property, and now he’s having financial problems,” Mayor Pat Fribis told the Crestwood-Sunset Hills Kiwanis in September. “We had a hearing just last week with him and we’ve cited him on many items, he’s admitted he’s guilty to all of them. And he has 30 days to clean up the trash pile of asphalt there, to level it, not the steel structure but all the debris on the property. And he has 90 days after that to move forward or the city will take down the steel structure, file a lien against the property and then we’ll have to put it up for sale.

When Saladin didn’t fix them, the city held a nuisance property hearing Sept. 5, at which Saladin didn’t dispute the city’s claims, according to a memo from Sterman to aldermen.

Saladin said at the hearing that he would clean up the site and bring it up to code, which he did after the hearing.

The city declared the property a nuisance in the meantime.

But Saladin didn’t meet another 90-day deadline to take down the steel structure or make it safe.

That deadline came and went Dec. 18.