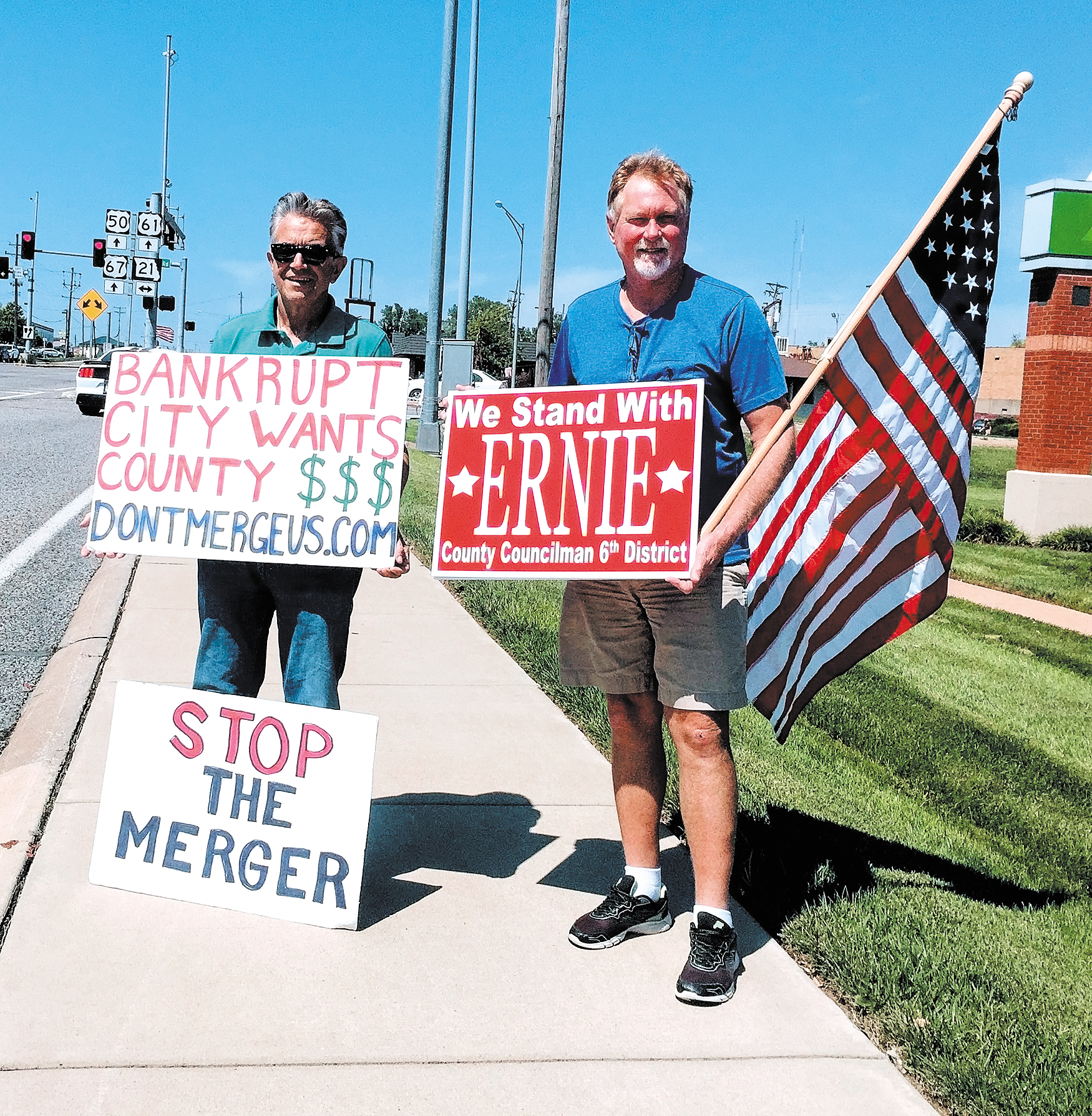 Pictured above: Roughly 20 members of south county Republican groups waved signs in a show of support for 6th District Councilman Ernie Trakas, R-Oakville, at the intersection of South Lindbergh Boulevard and Tesson Ferry Road in 2017. Trakas himself made an appearance at the event with signs against a city-county merger. The councilman is pictured alongside supporter Paul Alvino of Oakville, right. Photo by Gloria Lloyd.

A lawyer’s letter sent to all St. Louis County municipalities last month could have a chilling effect on any opposition to or even discussion of the city-county merger — which if passed would end those cities as residents currently know them.

Attorney Charles Hatfield of Hatfield, Stinson & Street in March sent a form letter, personalized to each of the county’s cities, requesting 25 different types of Sunshine Law requests for any and all information and discussions they’ve had about a merger and with the Municipal League of Metro St. Louis and its Executive Director Pat Kelly.

The letter tells the cities that any time, money or in-kind efforts against a ballot measure go against state law and are punishable by up to a year in jail.

Hatfield declined to say who his client is, but whoever it is appears to have deep pockets — the letter to all 88 cities said if there is a charge for the 25 different Sunshine Law requests Hatfield will pay it. It is similar language to Better Together’s original letters to cities for data five years ago.

The campaign started by nonprofit advocacy group Better Together for a merger of St. Louis County and St. Louis city into one government is backed by billionaire megadonor Rex Sinquefield. The petition for a statewide vote on the merger is filed with the state but has not yet been approved. Backers would have to gain 160,000 signatures to get it on the ballot in November 2020.

Under the plan, county cities would lose most of their current powers over policing and zoning, and they would become “municipal districts,” which could still have mayors and aldermen but would have powers over parks, trash and lesser services than the larger “metro city,” which would be overseen for the first two years of the city’s existence by current County Executive Steve Stenger.

Many county cities have lobbied instead for a Board of Freeholders process backed by the Municipal League.

But Hatfield’s letter appears to specifically target those efforts.

“I don’t see why that’s illegal. If we are opposed to something, we should be able to voice our opinion,” said Sunset Hills Mayor Pat Fribis. “It’s freedom of speech.”

He believes the two county bodies are controlled by Stenger, who would be “metro mayor” under the Better Together merger and fully supports the plan.

Hatfield is the “go-to guy for the administration,” meaning Stenger, the councilman said.

“Consider the source,” Trakas said. “With that premise, what’s the motivation behind the letter? Clearly intimidation… It’s meant to intimidate, nothing more. It’s just like any other bully. Hatfield’s a hired gun, and hired guns do what they’re told for who’s paying them.”

He also doubts that Hatfield has any specific evidence that city funds have been misused, but is on a fishing expedition.

So far, the County Council has not received a similar letter.

That adds to the bias against cities, Fribis said.

“It’s not fair to us,” Fribis said. “They’re just taking it over, and that’s not right.”

She posted on her mayoral Facebook page that the Municipal League’s petition for a Board of Freeholders was at Sunset Hills City Hall, and four pages of city residents have come in to sign it.

But the mayor also said Sunset Hills will look into its own legal options.

“They’re saying, ‘You just have to let us take you over,’ and no, we’re not going to stand by and let that happen,” she said. “We want to make sure we can maintain our parks and maintain our Police Department and still have a say-so in what roads will be improved at what time and make sure the quality of our streets and sidewalks can be maintained.”

The 25 separate Sunshine Law requests, covering records from the last 18 months on any subject related to the merger or Municipal League, will take a lot of staff time to fulfill, Crestwood City Administrator Kris Simpson said.

He and City Clerk Helen Ingold responded to the request.

Simpson noted that it probably won’t be the last time, either — the letter hints the requests could be ongoing up until the merger vote.

Hatfield sent so many letters that the cutting and pasting didn’t always go perfectly: Sunset Hills received their letter later than other cities because it was emailed to a Town and Country city email address.

Green Park’s letter was emailed to the email address of former City Administrator Zella Pope, who hasn’t worked for the city since 2016. She was the city administrator/city clerk when Better Together sent out its own requests for data five years ago, but spokesman Ed Rhode said the organization didn’t rent out its contact list to whoever Hatfield’s client is.