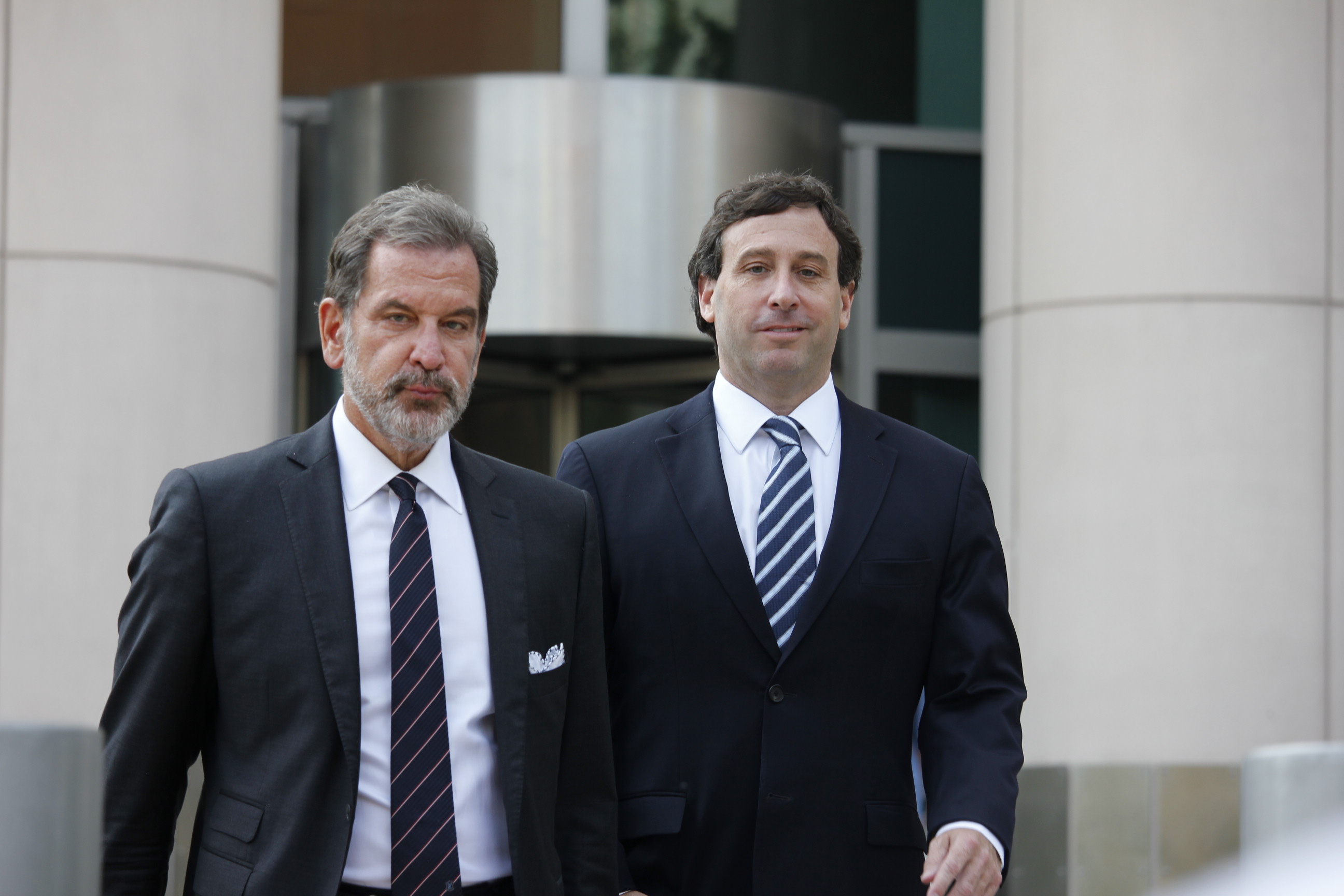 Stenger, 47, pleaded guilty May 3 to three felony corruption charges: bribery, theft of honest services and mail fraud.  He admitted that he exchanged county contracts for campaign donations. So far, three other people have been convicted in the case, including Stenger’s chief of staff, the head of the city-county economic agency and John Rallo, the businessman at the center of the case who sought out county contracts by handing Stenger quarterly donations.

Perry agreed to allow Stenger to voluntarily surrender to prison no later than Sept. 21 since his wife is expecting a baby girl, their third child, due Sept. 13.

She also went along with Stenger’s attorney Scott Rosenblum’s request that she recommend Stenger serve his time at either FPC Pensacola in Florida or FPC Yankton in South Dakota, two prison camps listed among the top 10 cushiest federal prisons by Forbes.

But Perry did not agree to recommend that he be entered into a residential drug abuse treatment program, or RDAP, for alcohol abuse. Instead, she said she would let the Bureau of Prisons decide if he merited entrance into that program. Inmates who enter the program can get a year knocked off their sentence upon successful completion of the program.

Perry could have sentenced the former county executive to more or less than the 37 to 46 months in prison called for in his plea agreement. Stenger had asked for 37 months, and prosecutors pressed for 46 months. The three charges each carry a maximum sentence of 20 years and a $250,000 fine each.

So many people crowded into the third-floor courtroom at the Thomas F. Eagleton U.S. Courthouse at the sentencing Friday that court staffers had to bring in extra chairs and allow observers to watch from the jury box.

“None of the people in this court who have been sentenced for public corruption have held as high a position as you,” Perry noted, adding, “This is a sad day. It’s especially sad for the citizens of St. Louis County. Mr. Stenger, they deserved better from you.”

Perry said she chose a sentence at the top end of the range to serve as retribution, to emphasize how severe the public corruption was in this case and to deter Stenger or anyone else from committing similar crimes. And although his plea deal did not call for a fine beyond $15,000 to $50,000, she imposed one of $250,000, due immediately to the U.S. Treasury.

As the judge was reading through the many pages of documents related to the case, she said, “what really struck me was how long this went on. Months, years. This wasn’t something that you just did for a short period of time. This was your way of life.”

Goldsmith asked Perry to take into account the broader implications of the case beyond the courtroom, emphasizing it was a “significant criminal case with an impact on the entire region. This defendant’s criminal conduct was breathtaking in its scope, even for what we see in public corruption.”

Stenger’s “criminal conduct went on for four long years, and St. Louis County and its residents can never get those four years back,” Goldsmith said.

Prosecutors had requested in their first sentencing memo Aug. 2 that Perry impose a sentence within the guidelines of three or four years, which they said was justified by his profanity-laced, bullying behavior while in office. In his own memo filed Sunday, Stenger’s attorneys asked for the low end of the sentencing range, 37 months, noting that Stenger quickly pleaded guilty and surrendered his law licenses and license as a certified public accountant, prepaid the restitution and was a first-time offender with a low likelihood of reoffending.

But in the prosecutors’ second memo filed Tuesday, Assistant U.S. Attorneys Goldsmith and Reginald Harris changed their request to ask for a sentence at the high end of the range, four years.

Rosenblum addressed Perry for 35 minutes, starting out by saying that Stenger “violated the public trust, and he has admitted that in open court.” But he said that the vulgar, crass language captured on federal wiretaps and quoted in the prosecutors’ sentencing memo were from one year of Stenger’s life, and he should be judged on all 47. He said Stenger had accomplished good things as county executive like the state’s first de facto statewide prescription-drug registry and Proposition P providing more money for police. And he said that Stenger’s time as a lawyer was impeccable, serving clients and following the law. He is “embarrassed” that he brought shame to the legal profession.

Stenger gave a short statement, in a more halting voice than St. Louis County residents would be used to hearing from their onetime leader. As what he called his “words to the public,” he started by apologizing to his former constituents, county officials and employees, the St. Louis Economic Development Partnership and the county Port Authority, his family, friends and supporters.

He said he has a “deep and constant feeling of remorse for what I’ve done. And I can tell you that there hasn’t been a day that has gone by since this matter began that I just haven’t deeply regretted what I did. And if I could go back and change the way I was thinking, change the words I used and change the things I did, I would absolutely do that. And you quickly come to the realization that that’s impossible. And you can’t.”

So “the only thing I can do is move forward, seek to make right what I have made wrong and make the very best I can out of my life following incarceration and during incarceration” — his voice cracked as he said those words —  “and become a better person and become a person who can be productive in the community again.”

Goldsmith gave a short rebuttal to Rosenblum, noting that “this defendant lied to the public over and over…. He lied day in and day out, all to conceal his scheme.”

There was some disagreement between Goldsmith and Rosenblum over the victim impact statement submitted by the County Council, which harshly described Stenger’s time in office. Rosenblum said the words were “political,” but Goldsmith disagreed. He said he had told the council to “write from the heart.”

The councilman who wrote most of the council’s letter was Stenger’s successor as 6th District councilman representing South County, Ernie Trakas. He declined to comment after the sentencing.

But the councilman told The Call earlier in the case that Stenger had already paid a heavy price, and that he felt Perry would do the right thing in sentencing. As attorneys, both he and Stenger have argued cases before the judge in the past.

Third District Councilman Tim Fitch, the former county police chief, said outside the courthouse, “I think it was a healthy dose of justice. I was surprised at the sentence at the upper end of the range, and I was very surprised about the $250,000 fine. The one million citizens of St. Louis County can rest assured that their government does still work right. Even though we’ve seen corruption in this case, this is how it ends. All elected officials should attend a hearing like this today.”

Stenger’s three siblings and sister-in-law were in the courtroom, but not his wife. Numerous students and young people also showed up to see the sentencing. Among the Stenger detractors in the 100-plus crowd were Trakas in the front row with 5th District Councilwoman Lisa Clancy,  County Executive Sam Page’s Chief of Staff Winston Calvert and Fitch in the second row. Across the courtroom sat Beth Vesco-Mock, the former county animal shelter director who was hired, defended and then later fired by Stenger; and new Port Authority Chairman John Maupin, who led the “rogue” Port Authority appointed by the council that usurped Stenger’s own Port Authority.

Earlier in the day, the courtroom had been packed with people for a naturalization ceremony of people wanting to be citizens, and before the sentencing, Maupin commented on the irony of that timing and how the new citizens looked at their presence in the United States as an honor.

“This is a contrast in civics lessons,” he said.