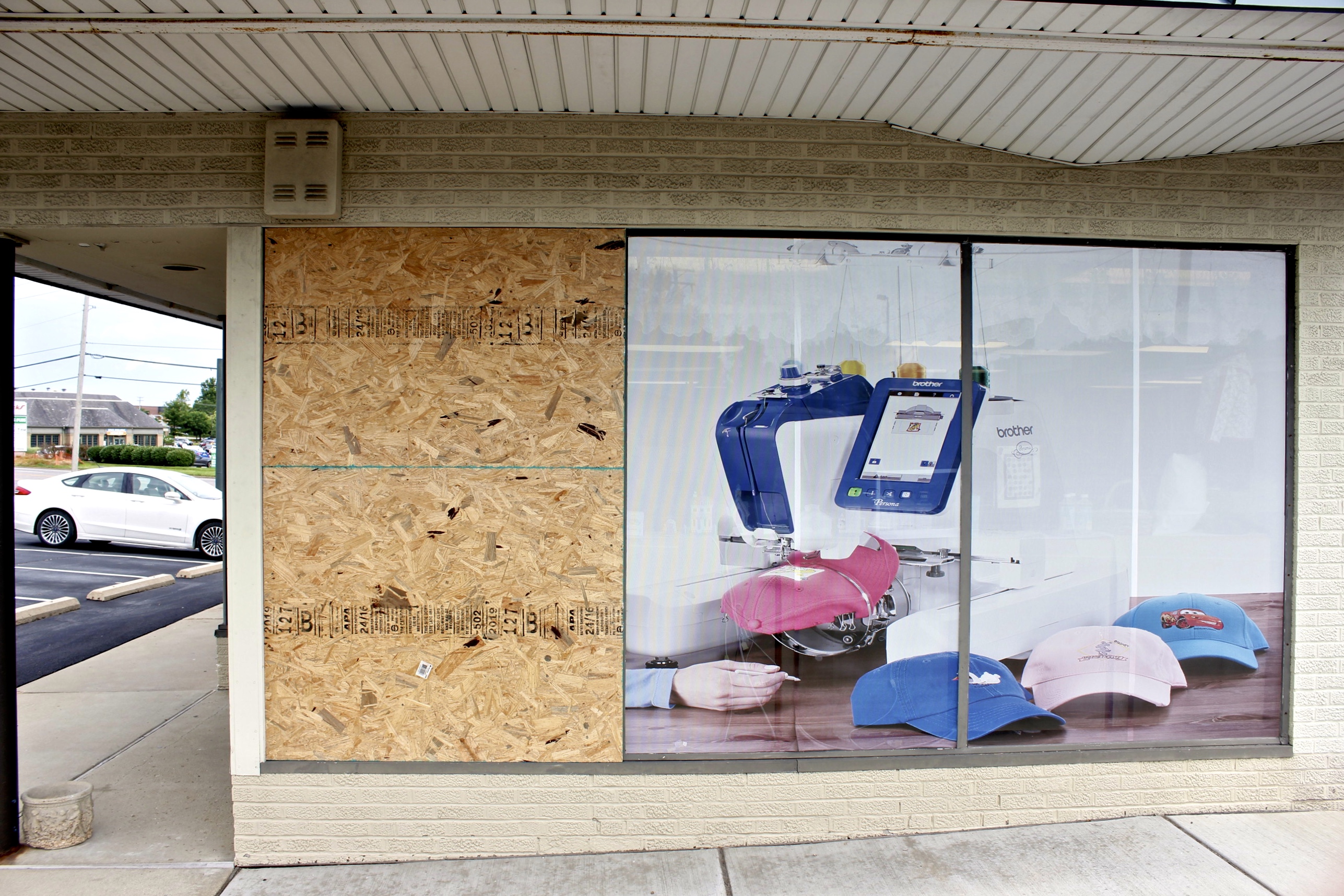 Pictured above: A piece of plywood is used to temporarily cover-up the broken window at Heyde Sewing Machine Company on Lindbergh Boulevard after two suspects broke through the window the morning of Saturday, June 15 and stole two sewing machines. Each machine cost $20,000 each and police are still investigating the burglary. Photo by Erin Achenbach.

A South County sewing-machine company was robbed in the early hours of Saturday morning, and police are still looking for the suspects responsible.

Two suspects made off with two sewing machines, each worth $20,000. 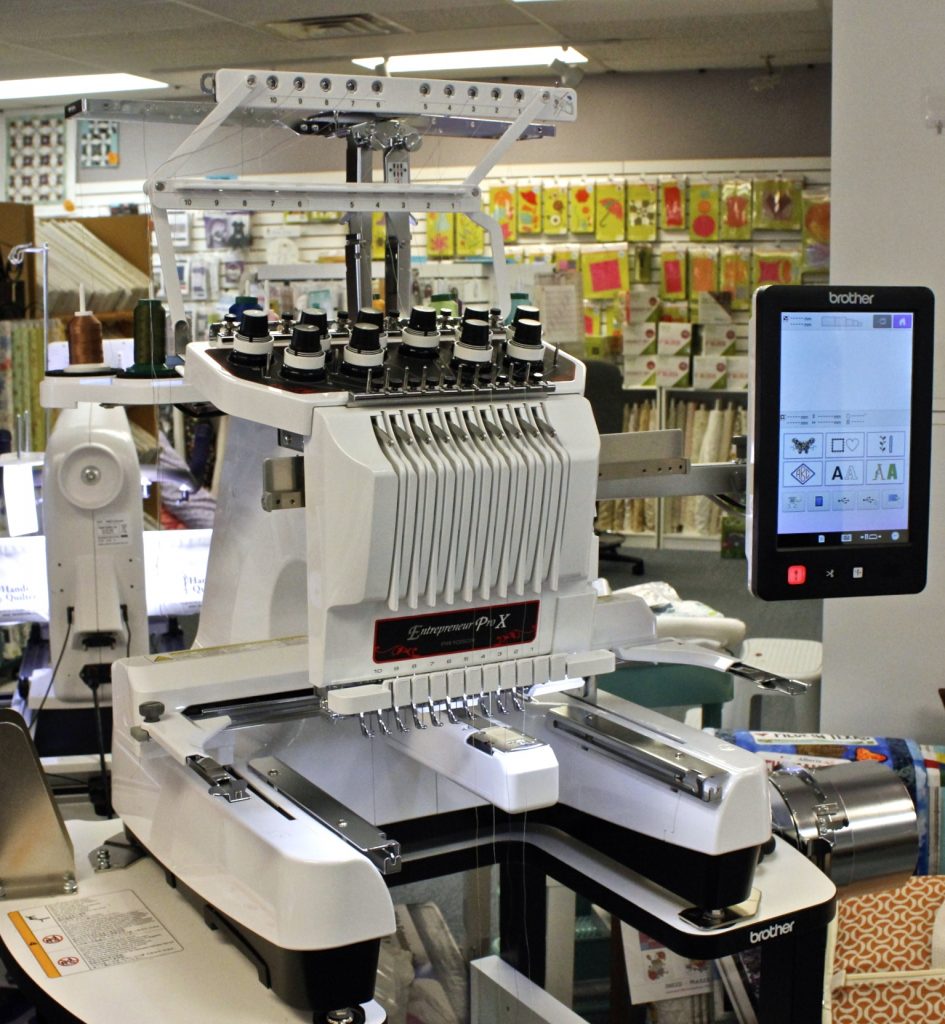 One of the types of sewing machines the two suspects stole from Heyde Sewing Machine Company Saturday, June 15. Karen Warren, owner of Heyde Sewing, said that the suspects did not take the necessary accessories for the machines to work, essentially rendering the machines useless. Photo by Erin Achenbach.

Karen Warren, the owner of Heyde Sewing, said that she was contacted by police around 8:45 that morning, after police were notified by a driver passing by the store that one of the store’s windows had been broken.

The suspects initially tried to break in through one of the front windows, but since that window is tempered glass, they were unsuccessful. Instead, they broke through a side window facing Concord Village Avenue.

The suspects broke into the store around 4 a.m., according to the store’s security footage. Only two sewing machines, each about 100 pounds, were stolen, a $40,000 total loss.

“These are top-of-the-line machines,” said Warren. “The thieves must have known what they were going for because anybody that is not a sewer would not have known that’s a top-line machine and are that expensive.”

Warren said that the suspects would not be able to sell the machines for what they’re worth because the security footage showed them dropping the machines several times.

The suspects also did not take the accessories needed for the sewing machines, rendering the machines essentially useless.

“My opinion is that whoever stole it is someone that wanted to start an embroidery business and realized, ‘I can’t do this … I need to find a $20,000 machine,’” said Warren. “It was really stupid on their part. Why not steal money and buy a machine?”

Police have been looking through the store’s security footage from the past week to see if they note anyone suspicious, but that’s all Warran said she knows.

They believe the thieves must have scouted out the inside of the store beforehand, since they knew exactly where to go to find the machines in the dark while the store was robbed.

Additionally, each sewing machine that was stolen has its own serial number and coding within the machine. Since the suspects dropped the machines multiple times during the robbery, they will most likely not work without being repaired. 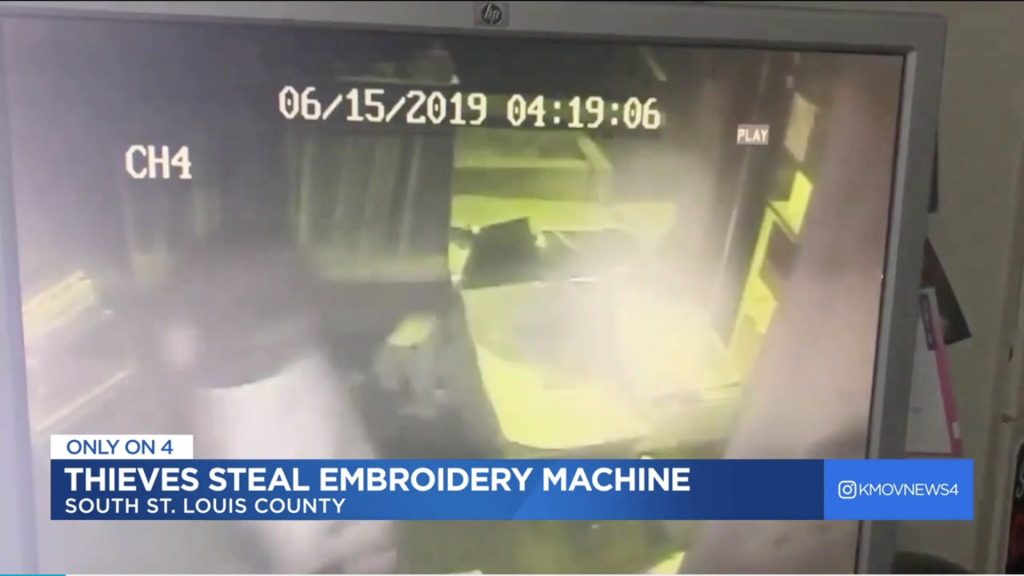 A screenshot of the security footage from the robbery at Heyde Sewing Machine Company. A suspect is visible in the lower lefthand of the screen. Image courtesy of KMOV 4.

But the network of dealers who repair the types of machines stolen is small and dealers will be able to know if a machine brought in for repairs is one of the stolen ones based on its serial number.

Heyde Sewing Machine Company has been a South County staple since 1950. Warren and her husband bought the store 25 years ago.

The St. Louis County Police Department’s Burglary Unit is investigating the incident. Anyone with information is urged to contact investigators at 314-615-5400.