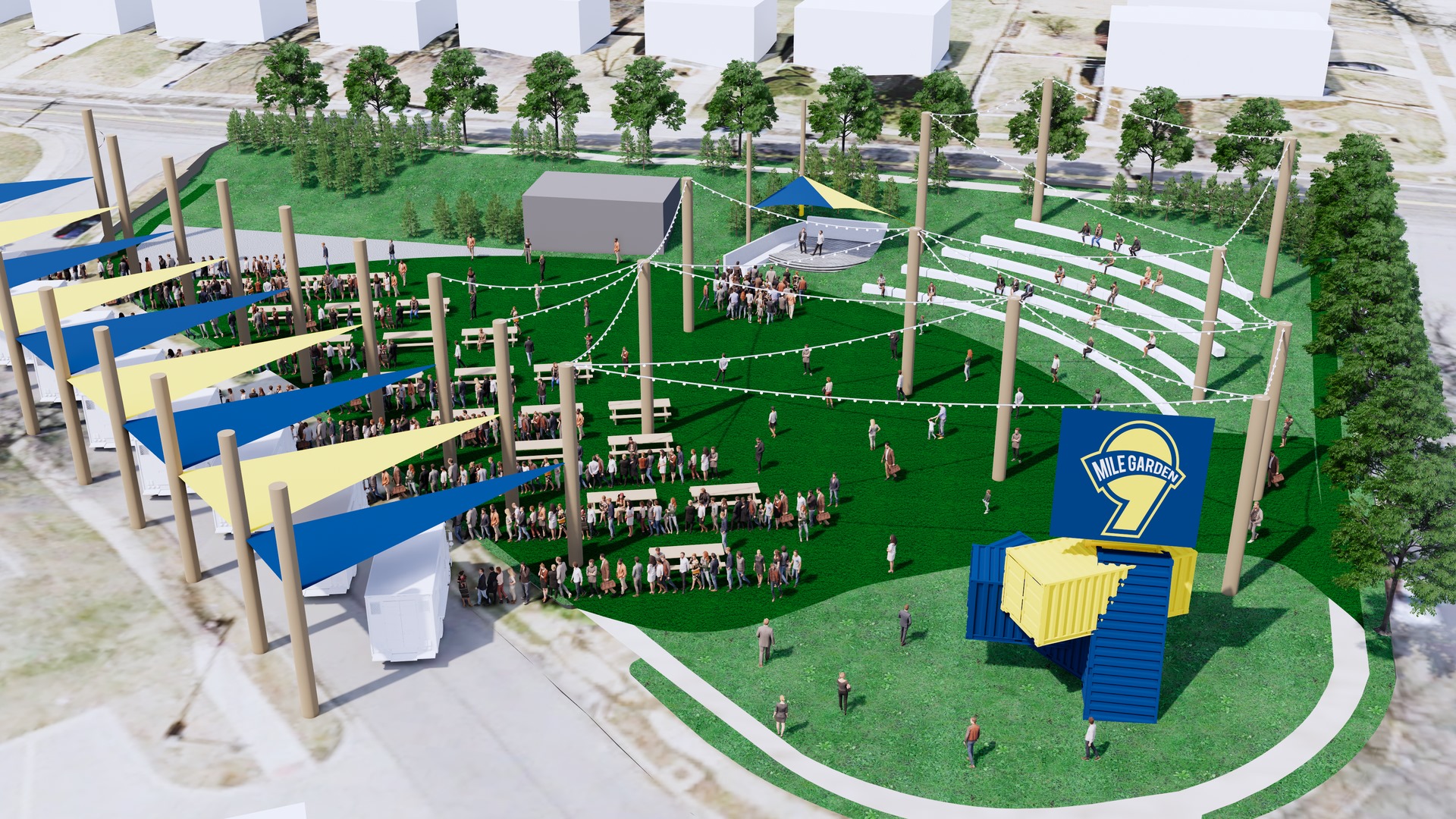 Pictured above: A rendering of the proposed Affton Plaza food truck garden.

The owners of Affton Plaza are proposing Missouri’s first food truck garden next to the strip mall, but some neighbors are upset about the idea due to traffic, noise and lights that could come from the new “town square.”

The proposed “9 Mile Garden” could open as soon as spring 2020, if St. Louis County grants approval.

And that’s still an open question. The county Planning Commission held a public hearing on the new gathering place Sept. 16, as Affton Plaza developers asked for a zoning change to allow the food truck garden at the corner of Gravois Road and Tobey Avenue. In a show of hands at the hearing, 10 people raised their hand in favor and six against or with concerns.

“We think we’re going to bring a lot of people to Affton that aren’t there right now,” developer Larry Chapman of Chapman Ventures said. “We’ll do well economically, and Affton will have a good show of it.”

The “Food Trucks on Parade” event after the Affton Days parade Sept. 21 was a preview of the site’s future.

Besides a variety of food trucks, plans call for a “big, open green space” that could host movie nights, concerts and “places for kids to enjoy” like a play area and cornhole, Chapman said. The ground will be covered in AstroTurf, which could be driven on by food trucks year-round.

He thinks it will beautify Affton, with landscaping and a handicapped-accessible sidewalk along the road. He mentioned gardening planters and poles to string canopies and lights across to create atmosphere.

Chapman said of the idea behind the plaza, “It’s just a really fun, family friendly thing. This is a family amenity, it’s 100 percent what we’re after… We will be very safe and friendly.”

The zoning application proposes an outdoor event space “including but not limited to farmers markets, craft fairs; food trucks and accessory uses; and all C-3 permitted uses.” Chapman suggested an art fair, along with weddings and family gatherings. In keeping with the family theme, all bathrooms will be family bathrooms.

“We think it’ll get used pretty much all the time,” Chapman said, with people traveling from 20 miles away to visit.

Chapman told commissioners his company has worked hard to revitalize Affton’s string of tired strip malls along Gravois for the last few years, giving them new facades and upgrades with the help of tax-increment financing, or TIF.

He wants to do something extra for the area too. He refers to the food truck garden as “Phase 2” of the Affton Plaza project.

“We needed to bet on Affton, and when we do, we would be rewarded,” Chapman said of his philosophy behind the project.

He said that developers pursued national tenants without success, eventually realizing that the key to the plaza was local businesses. He said that has gained “tremendous support from the community.”

But Chapman noted that zoning was tricky, because there’s no precedent in Missouri for what he wants to do in Affton. He saw a similar project in Destin, Florida, while on vacation.

“We’re in here for uses that have never even done before, that’s why we need your zoning,” he said.

Chapman said the developers “asked ourselves what Affton really needed, how to make Affton better,” and landed on a permanent place to park food trucks.

When the plaza drew 1,500 people this summer for a food truck event, the company handed out surveys asking residents what they wanted to see. The suggestions led developers to settle on the food truck garden.

The Affton Chamber of Commerce is endorsing the plan and wrote a letter to the planning panel arguing it will be good for business.

Chapman said he expects the site to host 350 to 500 people at a time, because it will roll over like a restaurant as people come and go. The shopping center has 480 parking spaces already and is adding parking, but the peak food truck hours will likely be after other businesses in the plaza close.

Hours won’t be fixed. On weekdays, peak times will be lunch and dinner. But on weekends they will come all day long, staying for special events. Individual food trucks will have to apply for alcohol permits, but developers won’t have one themselves.

“I doubt we would go past midnight — but maybe,” Chapman said. “Think of a restaurant — we’re not like a business with set hours.”

As for security, he will have security cameras but does not plan to employ security guards, instead relying on employees of food trucks to keep an eye out. He would prefer not to install a fence around the area because it “defeats the openness of it,” but that’s an option if there are issues. He said there will be “a lot of police presence” from the St. Louis County Police Department as well as the Affton Fire Protection District.

When a commissioner, Lou Cunningham of North County, said Chapman should hire security guards, Chapman said he’ll do everything he can to make sure visitors are safe: “If we have any problems, this’ll become an area that no one’ll want to visit again. Our goals are to create a super family friendly environment that attracts people from Affton and other areas.”

Parking is a key reason why developers want the food truck garden to be at Gravois and Tobey.

“The beauty of this site over other sites is it’s part of a larger shopping center” with ample existing parking, Chapman said.

Chapman said he’s hired consultants to come up with audio and lighting that will affect neighbors least. Instead of one giant speaker for movies and music, experts recommend several smaller speakers 30 feet apart that direct the audio so it’s “contained and contextualized” and doesn’t get to nearby houses.

“You won’t hear it outside of the property,” Chapman said. “We’re convinced we can get that done.”

But at the time of the public hearing, he hadn’t gone door-to-door in the neighborhood to see what neighbors thought of the idea. Instead, he thought he’d find out what the community was thinking at Affton Days.

But that doesn’t matter to neighbors who say living next to it will greatly affect their day-to-day lives.

They worry about traffic, noise, parking, lights and increased crime.

Weber Road resident Bob Campbell lives across the street and objected to a midnight closing time. Crime is already an issue in the neighborhood, with his car vandalized multiple times. And he said the idea is “not for the residents of this area,” despite what he called the “fluffy” presentation by Chapman.

“You’re going to run our home prices down,” Campbell told the commission. “The sound and the light are going to be a problem, as well as the crime.”

Neighbor Joe Cross said he didn’t believe that Affton Plaza can keep the sound down. He said he was already tired of the vandalism in the neighborhood and hearing Affton High School’s football games from miles away, along with music blasting out of the cars of the employees of a neighboring auto-parts store.

“If this is there, it’s going to be a place for the homeless people to sleep at night,” Cross said. “The potheads are going to be sleeping there all hours of the day.”

He added, “It might be great for the community, but find another spot in the community for it because it’s just going to kill my home value. No one’s going to want to live across the street from that.”

Cross’ neighbor Dave Hanschu said he was concerned about visitors “getting interested in the neighborhood and wanting to poke around.”

But Chapman said his company is committed to bettering Affton with a beloved addition to the area. He noted that they’ve already shown commitment to that by tearing down the eyesore houses.

“We’ll clean up the neighborhood,” he said. “We’ll have a vested interest in making sure that the area is well kept… I think everybody knows something like that would be good for the community.”