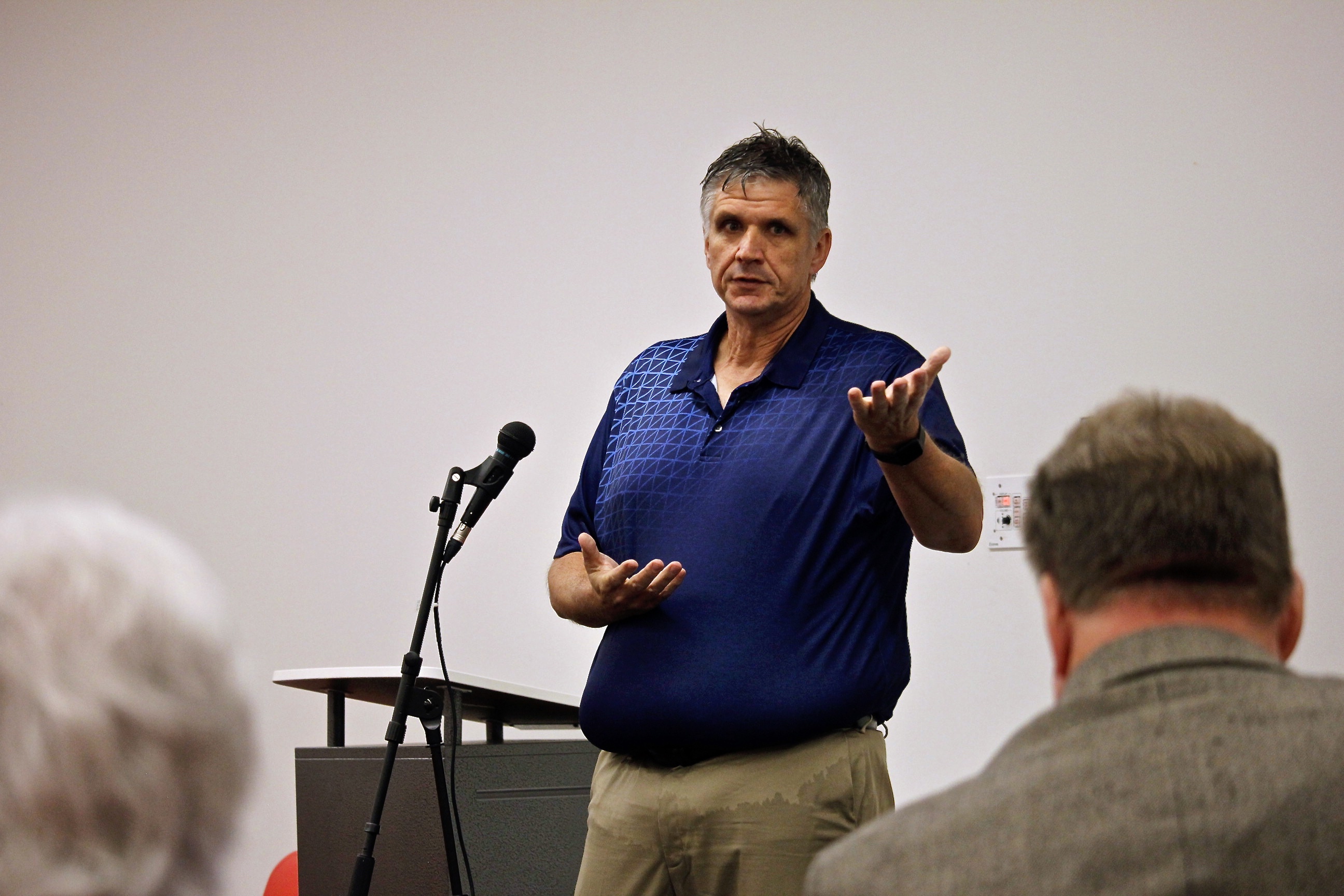 Pictured above: Daniel Dreisewerd, acting director of the St. Louis County Department of Transportation and Public Works, takes questions from residents regarding the Gravois-Musick intersection construction during a town hall at Grant’s View Branch of the county library Wednesday, June 26. Photo by Erin Achenbach.

The June 26 town hall, hosted by County Council Presiding Officer Ernie Trakas at the Grant’s View Branch of the St. Louis County Library — the construction of which spurred the changes in the first place — gave residents the opportunity to express their frustrations and question representatives from the St. Louis County Department of Transportation and Public Works and Missouri American Water. Also in the audience was Rep. Doug Beck, D-Affton.

The Gravois-Musick Road construction, which started in April 2018 and was originally scheduled to be completed by November, has been delayed multiple times: once when a previously unknown AT&T cable was discovered, forcing the original design plans to be redrawn, and again when contractors found an unexpected subterranean concrete wall owned by Missouri American Water.

Between the intersection improvements and previous repairs on the bridge over Sappington Creek, Musick has been closed in some form since 2017.

“This is probably the most snake-bit project I have ever experienced,” said Daniel Dreisewerd, acting director of SLCDoT in opening remarks at the town hall. “We’ve run into some obstacles. We’re working on overachieving those… We have a schedule from the contractor to be completed at the end of August of this year.”

The day before, on June 25, the department partially opened the intersection with “right-in, right-out.”

The main question on many of the residents’ minds was how both the cable and the wall were missed in the initial design.

Missouri American Water owned up to the most recent delay, conceding they were not aware of the thrust-block protecting a 20-inch water main under the intersection.

“We made a mistake. We’ve actually changed our process to ensure this doesn’t happen again,” said Pruitt. Missouri American Water is going to reimburse the $166,000 cost of the redesign on top of the already $1.2 million project.

Residents living along Cambrook Drive expressed their frustrations at drivers using their street to bypass the closed intersection, causing standstill backups along Cambrook. Residents said rude drivers would not allow residents into driveways.

Dreisewerd apologized, but said officials were hesitant to install temporary traffic signals because it might encourage more people to use the bypass.

Construction at the intersection was expected to resume last week.

“We have an approved schedule that commits to what I committed to y’all today,” said Dreisewerd, referring to the August deadline he promised at the beginning of the town hall.

When asked why residents should trust the new deadline, Dreisewerd replied, “I’m gonna say that I think we’re close enough this time there’s very little that can go wrong. All I can say is, we are close, and there’s just not a lot that’s unknown anymore.”

After the project is completed, there will be dedicated left and right turn lanes from Musick onto Gravois, a dedicated left turn lane from westbound Gravois onto Musick and improved sight distance over the hill onto Musick by lowering it. The county library will also build a new entrance.