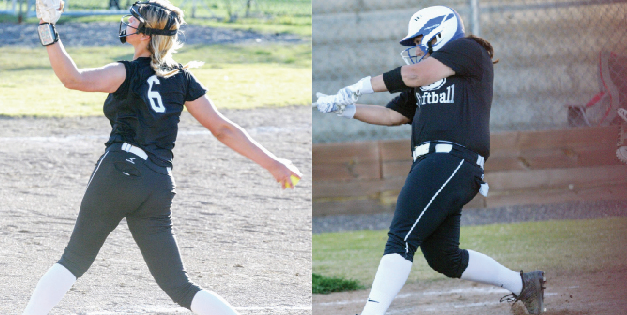 Pictured above: Left, Oakville’s starting pitcher, senior Calynn Gicante, throws on her way to the Tigers’ 13-8 district win over Rockwood Summit Friday in Fenton. At right, Madison Rhyne steps up to bat during the victory. Photos by Bill Milligan.

Oakville softball is in the habit of making the best of a bad situation this season. On Tuesday, Oct. 15, starting third baseman Amanda Fitzwilliam was in a car crash. On Friday, she hit two home runs to lead Oakville to the Class 4A, District 2 championship over Rockwood Summit.

The 13-8 district championship win was sweet revenge for an 11-10 Summit victory Oct. 2.

After the first inning, Summit was poised to repeat over the Tigers after jumping to a 2-1 lead. But the Tigers’ bats woke up and started clubbing.

Fitzwilliam’s first home run came on the second pitch she saw. It was the first of four Tiger home runs in the game. Also playing long ball were Ella Strickland and Madison Rhyne.

Oakville had 15 hits, and starting pitcher Calynn Gicante singled early in the game to break a 2-2 tie. After that, the Tigers’ hit parade never stopped.

Oakville, 19-4 on the season, was set to face off in the sectional against Northwest Wednesday, Oct. 23.