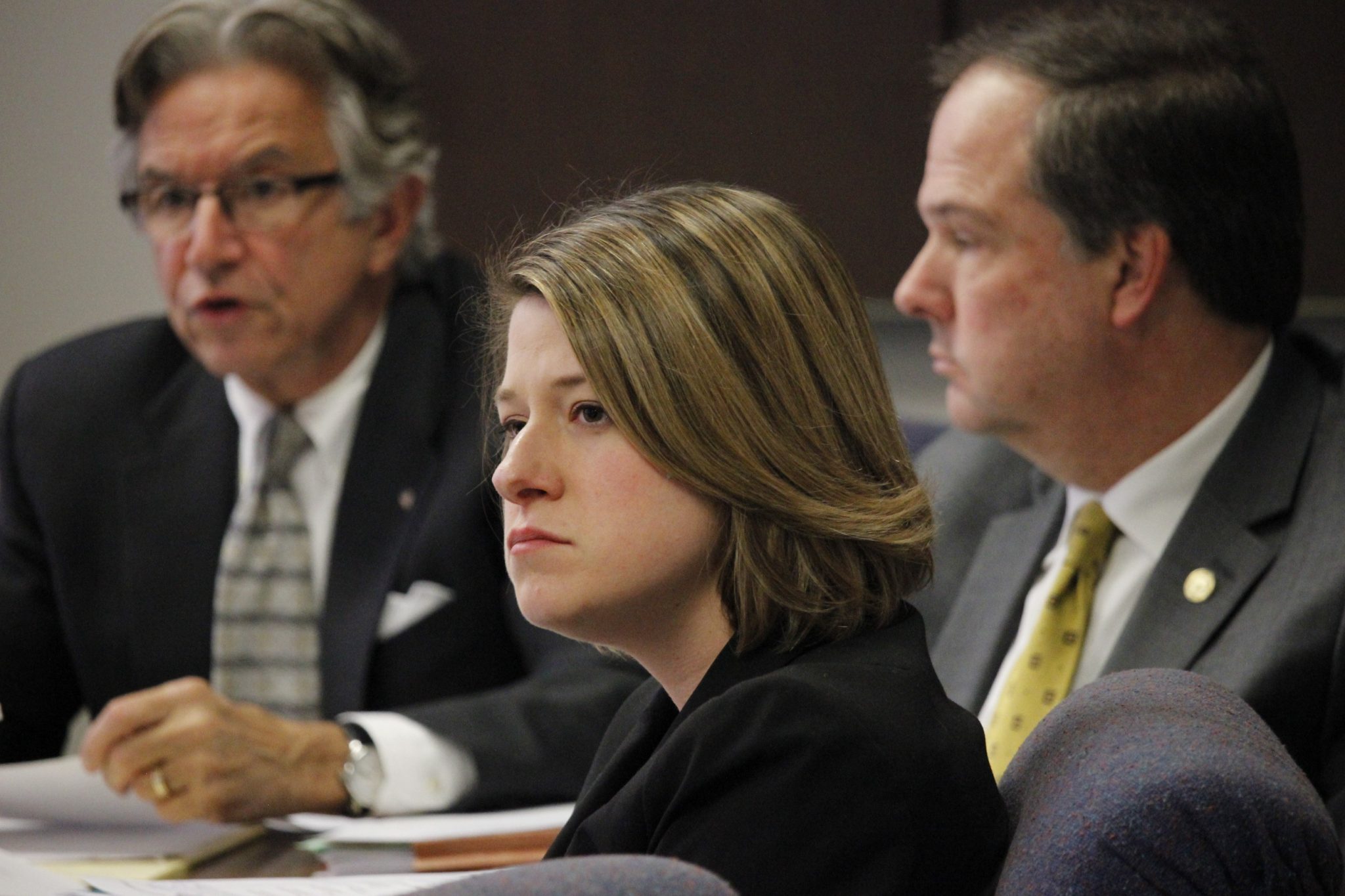 The owners of county offices at Northwest Plaza have filed a lawsuit challenging subpoenas issued by the County Council demanding that they testify or risk going to jail.

Northwest Plaza owners Robert and David Glarner, the brothers who redeveloped the former mall into office space called The Crossings at Northwest, filed a lawsuit Wednesday against St. Louis County and the current five members of the County Council disputing the legality of the two subpoenas the council unanimously issued to the brothers July 2. The siblings might be the first private citizens issued subpoenas by St. Louis County. 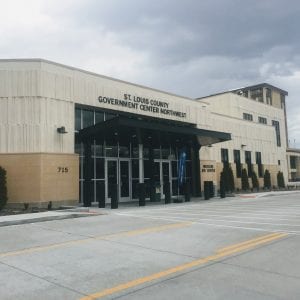 The Glarners are seeking an injunction against the council’s demand that they testify at a council Ethics Committee hearing Tuesday, Aug. 6. The committee chair, council Presiding Officer Ernie Trakas, said he has new evidence of wrongdoing he wants to question the brothers about.

The county entered into a lease with the Glarners in 2016 that will cost at least $50 million over 20 years. The Glarners were Stenger’s largest campaign donors, giving at least $365,000 to him over the years, starting with a $20,000 donation from their company Givco LLC early in 2016. The origin of the donation was a mystery until Stenger said it was from the Glarners.

But the lawsuit notes that the county official most enthusiastic about the project in 2016 was County Executive Sam Page, then the 2nd District council member representing an area that includes Northwest Plaza. Along with other council members, he backed Stenger on the plan and told reporters that it was an excellent move that would save $10 million.

But critics of the deal like Trakas and 7th District Councilman Mark Harder, who was the sole vote against it in 2016, say the lease is overpriced and potentially a quid pro quo between Stenger and the developers. 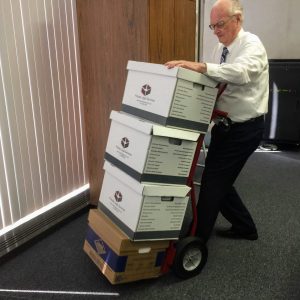 Black Jack Mayor Norm McCourt, who works in the county clerk’s office, transports the four boxes filled with an estimated 7,000 pages of documents from the Glarner brothers about the county’s Northwest Plaza lease to the county’s vault for storage after an Ethics Committee hearing June 25. Photo by Gloria Lloyd.

In their lawsuit, the Glarners argue that the council knew the terms of the lease when it approved it in July 2016, and the contract hasn’t changed since then. Trakas was not on the council at that time.

“Now, the Council is seeking to use subpoena power, for the first time in the history of the Council, in an attempt to order private citizens to produce documents and testimony for the express purpose of investigating whether the Council should take action to void these previously approved leases,” the Glarner petition states.

The council hasn’t subpoenaed Stenger or any of his employees who negotiated the lease, the brothers note.

The developers state in the lawsuit that the subpoenas are “invalid and unenforceable,” and the county Charter code they were issued under is “invalid and unconstitutional.”

They argue that the council never officially created the Ethics Committee, so the committee has no power. They also argue that compelling private citizens to testify does not fall under the committee’s stated purpose of overseeing elected officials.

The Charter clause that allows subpoenas violates the United States and Missouri constitutions, and the council’s decision to issue the orders is an “abuse of the authority and discretion vested in the council,” the lawsuit argues.

“Absent relief from this court, the subpoenas will cause the Glarners irreparable harm and jeopardize their constitutional rights,” the lawsuit states.

The brothers also served a copy of the lawsuit to Missouri Attorney General Eric Schmitt’s office since it challenges the constitutionality of a county charter.

Trakas said before the lawsuit was filed that he expected the brothers to take legal action to drag out the case.

As for their claim that the council is taking unprecedented action targeting private citizens, Trakas said, “That argument is specious — sounds good, but it doesn’t hold any water. The Glarners have, through their LLCs, contracted with St. Louis County to obtain tens of millions of dollars over 20 years — the idea that they’re immune from inquiry and questioning is just frankly absurd. That argument is meant to create the appearance of a legitimate basis to forestall the ultimate testimony by questioning the legitimacy of the subpoenas in court to drag it out.”

But he said he believed the county has the power to issue subpoenas under the Charter and will win in the end.

“I’m confident that once it’s all said and done, once every legal avenue is exhausted by the Glarners, they will be ordered to appear before the committee and testify,” Trakas said. 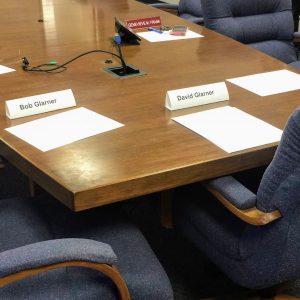 The nametags of Bob and David Glarner in front of their empty chairs at the Ethics Committee hearing. Photo by Gloria Lloyd.

The extensive list of documents requested by Trakas, including emails and text messages, are in possession of 65 different entities, including the Glarners’ accountants and attorneys, and many are unrelated to The Crossings, the brothers said in their lawsuit: “The subpoenas are unreasonable and inappropriate in scope and breadth and seek documents protected by attorney-client, work-product or other privileges.” Even if the brothers could gather the documents, the short timeline given to produce them is unreasonable, they said.

They ask for the subpoenas to be quashed entirely or for a judge to prohibit them from being enforced until after the U.S. Attorney’s Office for the Eastern District of Missouri finishes its current investigation into the leases.

It’s the first public acknowledgement by the Glarners that there is a current investigation into the leases. The leases topped a list of county documents that federal prosecutors asked for in April from Stenger as part of a larger request for nearly every contract and county document Stenger had overseen.

But the Glarners said that Stenger’s indictment and plea deal don’t mention them and are “wholly unrelated” to The Crossings.

But still, they believe testifying to the committee may force them to waive their Fifth Amendment right against self-incrimination, and they “should not be put in that position.”

The Glarners say that the lease predates the Stenger administration entirely. They started negotiations with the county in October 2013 over leasing the space, under former County Executive Charlie Dooley.

The plans eventually became a new North County Government Center measuring more than 140,000 square feet, which had a custom buildout that Stenger said came at a $10 million cost to the developer. In the lawsuit, the Glarners say that a county employee had estimated the job would cost the county $17 million to customize the same space.

With links to the YouTube video of the council meeting when the lease passed in 2016, the lawsuit quotes the various council members who initially spoke in support of the deal.

“This is a great location for the election board,” Page said at the time. “It’s a great value. It’s great access. It’s better space. And it’s just the economic boost that St. Ann and the surrounding area need, and I vote yes.”

Trakas, Page and others involved have urged the Glarners to renegotiate the lease and said that the council could potentially vote to void the lease altogether on the grounds that it violates the Charter prohibition against an employee receiving compensation in exchange for a contract.

But the Glarners’ lawsuit notes that the Charter does not say that developers can’t donate to the campaigns of elected officials, or that donations would count as “compensation.”