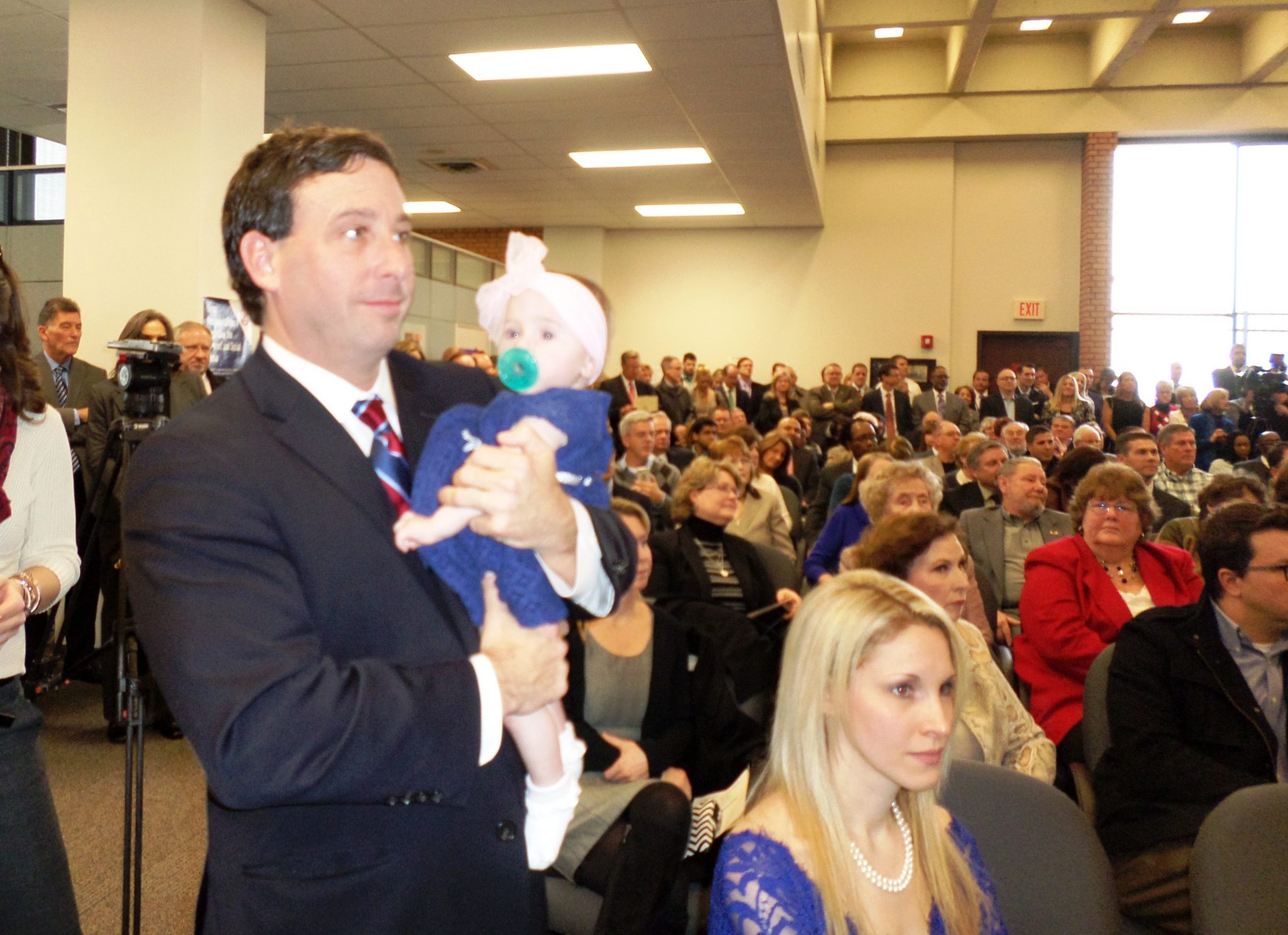 Pictured above: County Executive Steve Stenger is shown with his daughter, Madeline Jane, and wife, Ali, shortly before taking the oath of office Jan. 1. Photo by Gloria Lloyd.

As Steve Stenger took office as St. Louis County’s eighth county executive last week, he echoed his key campaign themes of transparency and accountability while also acknowledging the reality that the county — and the world — will have to change because of Ferguson.

“The world is watching,” Stenger said in his Jan. 1 inauguration speech. “With your help, we will show the world a fabric of communities with equal opportunity, fairness and justice for all, leaving no one — absolutely no one — behind. We are St. Louis County. God bless St. Louis County.”

Although Stenger touched on the challenges the county faces in Ferguson and north county, Oakville was the only area of the county specifically cited more than once during the hourlong ceremony, in the speeches of both Stenger and county Prosecuting Attorney Robert McCulloch, who took the oath of office for the seventh time after running unopposed in November.

“We’ve had some difficult times in the past few months — some old wounds have been opened — but those are the wounds that have to be addressed. And we’ll fix those, and we’ll work on those, and we’ll keep doing that,” McCulloch said. “I have to extend my thanks, my appreciation, to the people of St. Louis County, from Spanish Lake to Pacific to Oakville, for trusting me and allowing me to be their prosecutor for another four years.”

Using the same language of his Nov. 4 victory speech, Stenger said he will represent residents “from Ferguson to Wildwood, from Oakville to University City … from the disenfranchised to the affluent, from those with power to those who have none.”

Due to security threats that Stenger said were specific and severe enough to take seriously, he decided Dec. 31 to move the inauguration from its traditional public location at the County Council Chambers in the Administration Building to the jury-pool room on the sixth floor of the St. Louis County Courthouse, where security could be ramped up.

Not a single protester braved the New Year’s Day cold outside the courthouse to register discontent with McCulloch, Stenger, the county or the police, however.

Roughly 600 guests went through metal detectors to pack the invitation-only event, which was strictly ceremonial, since Stenger and other elected county officials assumed office when the clock struck midnight on the new year.

Outgoing County Executive Charlie Dooley’s name was never mentioned at the ceremony, and his primary ally left in county government, 1st District Councilwoman Hazel Erby, D-University City, did not attend the event with Stenger in favor of a later private ceremony where she will be sworn in for her third full term.

A recount earlier in the week gave Stenger’s general-election opponent, then-Rep. Rick Stream, R-Kirkwood, some extra votes, but not enough to significantly narrow the 0.6-percent gap that gave Stenger the victory.

Fifth District Councilman Pat Dolan, D-Richmond Heights, was sworn in for a second term, giving much of the credit for his re-election to his legislative assistant, Eric Fey. Dolan will serve as the council’s chairman this year, taking over from Erby.

Even more than Stenger and McCulloch, the star of the show might have been the St. Louis County Police Department. The crowd gave police multiple standing ovations, acknowledged by Chief Jon Belmar with a tip of his hat. 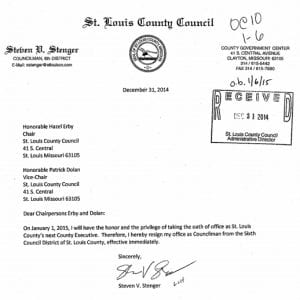 Based on legal advice, Stenger submitted his resignation as 6th District councilman to then-council Chair Erby and Dolan Dec. 31, the day before he took office as county executive.

“I will have the honor and the privilege of taking the oath of office as St. Louis County’s next county executive,” Stenger wrote. “Therefore, I hereby resign my office as councilman from the Sixth District of St. Louis County, effective immediately.”

With the 6th District seat vacant, the Democratic and Republican Oakville, Concord, Gravois, Tesson Ferry and Lemay township committees will elect nominees for the seat, who will run to serve out the remainder of Stenger’s term in a special election to be set by the County Council, most likely in April. Stenger’s term runs until 2017.

Although the 6th District could go months without a legislator, Stenger assured the Call he will not leave his constituents without representation: A staff member in the county executive’s office will handle phone calls and inquiries from the 6th District until Stenger’s replacement is elected, and Stenger will collaborate with the council to continue to pass zoning bills and other legislation in his absence.

“I’m not going to let my district suffer at all. I’ll keep up with the district,” Stenger told the Call. “That’s almost like a public-service announcement: I will ensure that for people who still have issues in the 6th District, they’ll be heard.”