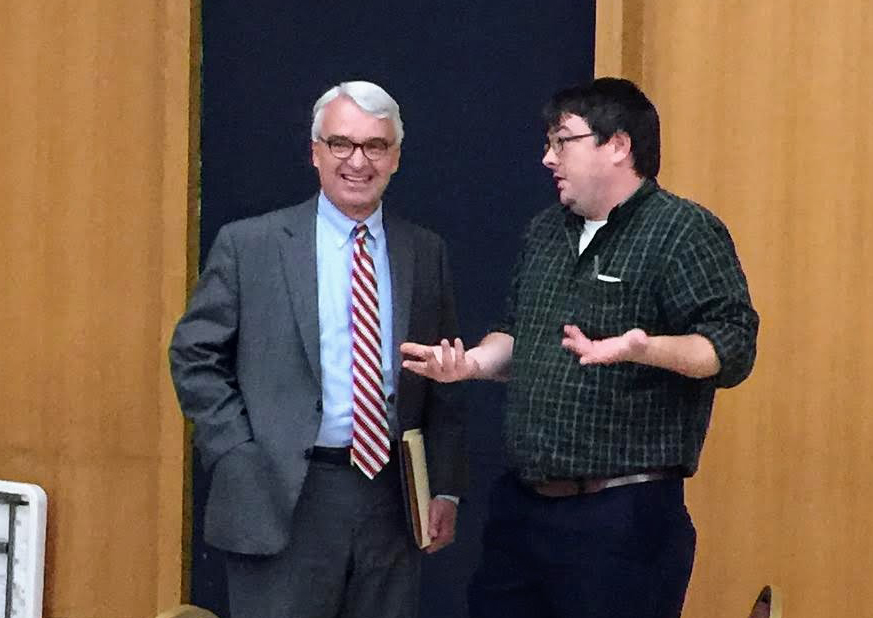 Hal Goldsmith has 1 p.m. this Saturday marked on his calendar.

That’s when former St. Louis County Executive Steve Stenger reports to prison in Yankton, South Dakota — something Goldsmith, the assistant U.S. attorney for the Eastern District of Missouri, made happen as the federal prosecutor who brought down Stenger’s administration, and with it an expansive pay-to-play scheme exchanging county contracts for campaign donations.

Stenger will serve four years at Federal Prison Camp Yankton, starting Saturday. He resigned April 30 after he was indicted and pleaded guilty in May to three felony corruption charges of theft of honest services, bribery and mail fraud. He declined to appeal his sentence.

Since the investigation is ongoing, Goldsmith has declined to speak after the court appearances of the various people he’s charged in Stenger’s scheme, including Stenger’s former Chief of Staff Bill Miller and Sheila Sweeney, the onetime CEO of the city-county economic development agency.

But the prosecutor made a rare public appearance talking about the investigation to an appreciative crowd at an “Ethics in St. Louis County Government” town hall held Monday night at Kol Rinah synagogue in University City. Goldsmith attends the synagogue.

The prosecutor acknowledged how rarely he speaks in public with his opening line: “I’m not used to sitting or being in a room with public officials like this. I’m used to standing at a podium in court like this with an elected official profusely sweating and giving me the stink eye.”

That got laughs from the County Council, which was represented at the town hall by six of its seven members.

Asked to speak on the subject of “Money in Politics,” Goldsmith had a lot to say.

“If you’re marking your calendars, and maybe some of you have, at 1 o’clock this Saturday in a place called Yankton, South Dakota, Mr. Stenger has an appointment to report to the Bureau of Prisons,” Goldsmith told the packed house. “So, money in politics. Money buys influence, money buys assets and of course under the current Constitution, individuals and corporations are free to contribute to whomever and whatever they wish to do.

“As Mr. Stenger often liked to say, and he did say it often, there wasn’t a company doing business in St. Louis County which hadn’t contributed to his campaign. And of course he was pretty much right about that.”

Stenger’s attorney, Scott Rosenblum, “suggested to me on more than one occasion that the money flowed in because he was just doing such an excellent job as county executive,” Goldsmith said to some laughs in the crowd. “But we all now know that oftentimes money flowed in because he let it be known that if you wanted to do business with St. Louis County you had to donate and help fill his political coffers. And certain companies and individuals were willing to play that game in exchange for county contracts. And yes, that is illegal.”

Quoting an expletive-laced comment Stenger made the day after voters re-elected him to a second four-year term in office last November that federal prosecutors included in a sentencing memo to get a judge to sentence him to the four years that were the high end of the three to four years recommended in his plea deal, Goldsmith said “because we’re in a house of worship I’ll clean it up.”

Stenger said “the world’s a ‘blanked-up’ place — and he was right, wasn’t he?” Goldsmith said.

The prosecutor noted that the public re-elected Stenger last year even though “some would also say that Mr. Stenger’s criminal conduct was not exactly the best-kept secret in St. Louis County — he was that arrogant.” 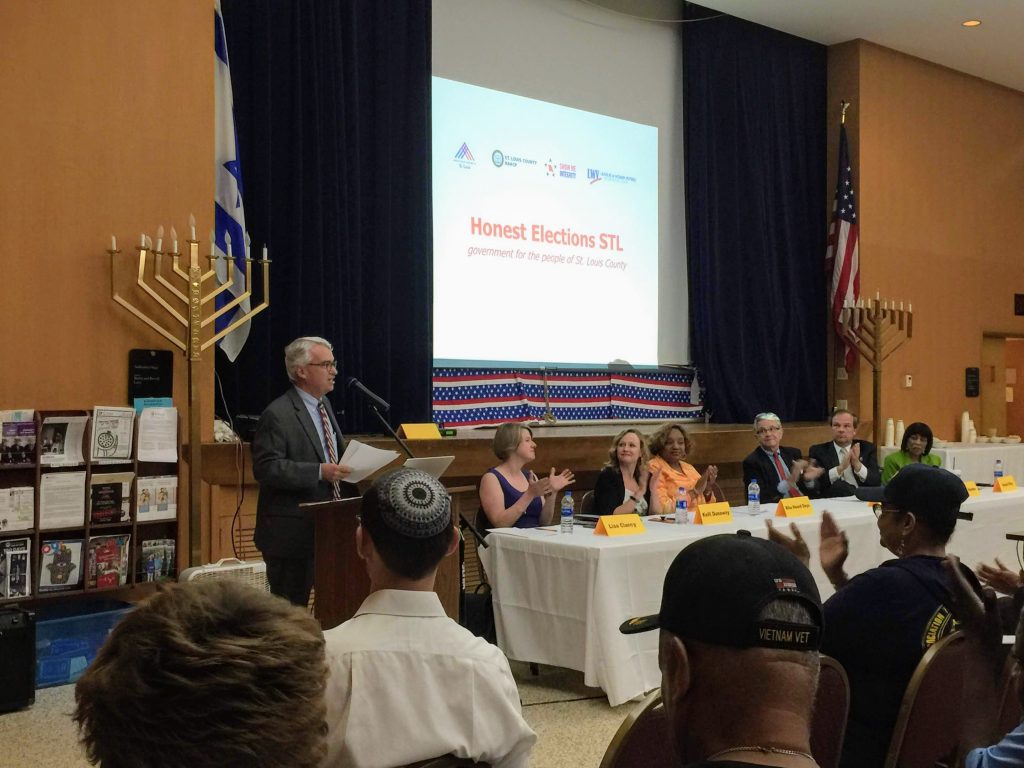 Six of the seven members of the County Council, right, laugh as Assistant U.S. Attorney Hal Goldsmith says that he’s more used to staring down politicians in a courtroom than appearing alongside them at town halls. Goldsmith and the council appeared at the ‘Ethics in St. Louis County Government’ Town Hall Monday night at Kol Rinah in University City. Photo by Gloria Lloyd.

He said that citizens have to stand up against someone going against their interests.

“You, the public, have to reject politicians who peddle these pay-to-play schemes and not simply accept it,” he said.

Noting the new whistleblower ordinance the County Council approved, Goldsmith said he thinks it should help clean up government.

No one voluntarily went to the federal government to turn in Stenger, he revealed for the first time.

Instead, people talked about Stenger’s corruption— but only after federal agents showed up on their doorstep first.

“There are also many fine employees within St. Louis government who when approached, cooperated in our investigation,” Goldsmith said. “But they didn’t come forward before we knocked on their doors. And a lot of doors were knocked on.”

He said that strong whistleblower protections and continued ethics training “would go a long way to prevent this type of criminal conduct going forward.”

Whether members of the public or county employees, “too many people viewed what he was doing as simply politics as usual, as simply what politicians do, and that’s an attitude that has to change if you want to restore honesty, integrity and ethics to government,” Goldsmith said. “We hope of course that the federal investigation and prosecution sends a different message, sends the message that this conduct won’t be tolerated.”

Goldsmith also encouraged members of the public to do something he said he does regularly — examine campaign-finance reports of officials to see who is giving to their campaign, and who might expect something in return: “I read those all the time.”

He said he’d read the April and July campaign filings from all the County Council members, and he noted that one of the six members of the council in attendance, Presiding Officer Ernie Trakas, had donations from many people who are retired and so not beholden to any particular company.

But he said anyone can see what he sees and what companies might expect something from county officials.

“My point is simply it’s out there to be seen, you can see what your elected officials are doing and what you’re doing with them,” the prosecutor pointed out.

But the U.S. Supreme Court made his job more difficult in 2016, narrowing the scope of how prosecutors can interpret the federal bribery statute to prove public corruption. The court vacated the conviction of former Virginia Gov. Bob McDonnell for bribery under the Hobbs Act, which also affected Stenger’s case.

Goldsmith quoted from Chief Justice John Roberts’ majority opinion that the court had to step in against “the government’s boundless interpretation of the bribery statute.” That’s a ruling that is making Goldsmith’s job much harder, he said.

“Yes, as a federal prosecutor, I’m standing up here bemoaning a conservative court,” he said. “Imagine that.”