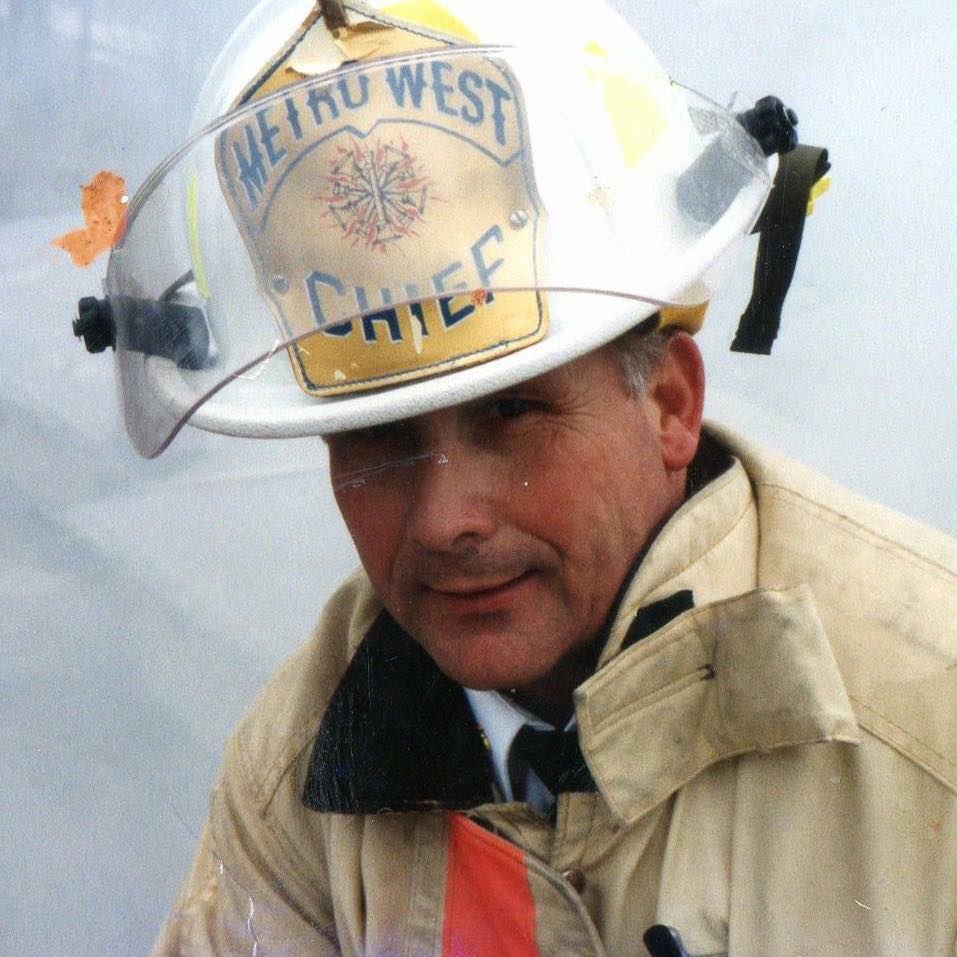 Former Mehlville Fire Protection District Chief Jim Silvernail, who died last week, will be remembered for his lasting impact on generations of first responders in the St. Louis region through his time as a chief of two fire districts and his dedication to the BackStoppers.

Silvernail, 74, died April 25. He is best known as the chief of two fire districts, serving for 23 years at the helm of the Metro West Fire Protection District and then coming out of retirement to  lead the charge for five years on the changes at the Mehlville Fire Protection District after the election of current board Chairman Aaron Hilmer and board Treasurer Bonnie Stegman in 2005.

The former fire chief, who lived in Wildwood, is survived by his wife of nearly 50 years, Marian, and two children, James and Shelley, and seven grandchildren. His son, also named James “Jim” Silvernail, is the chief of the Kirkwood Fire Department.

Flags on county property are set to be flown at half-staff in honor of Silvernail the day of his visitation and funeral mass at the Cathedral Basilica Tuesday and Wednesday on the command of County Executive Steve Stenger, who said Silvernail was a friend to many in the county and will be truly missed.

“He was a fantastic man, he was a very good friend of mine, he was a true public servant,” Stenger said. “He lent himself to so many good causes in the community, and I know I will miss him and there are many people that will miss him.”

In his second retirement since stepping down from the MFPD in 2010, Silvernail was a tireless supporter of the BackStoppers organization, serving as a board member and in other roles in the organization, which supports the families of fallen police officers and firefighters.

“He spent his life in service to others and even after retirement, committed himself to the care of fallen first responders’ families,” Elizabeth Snyder wrote on Facebook. “A true pillar of strength and kindness.”

Silvernail was in the fire service for nearly 50 years, starting at 19 years old and ending with his retirement in Mehlville in his 60s.

Remembering a past mentor at Creve Coeur, Silvernail said you grow especially close to people when you’re in buildings that collapse and you have to get out together. While at Creve Coeur, he received recognition for rescuing a young boy from the second story of a structure fire off Creve Coeur Mill Road. Later accolades included an award for rescuing several elderly victims at the Manchester nursing-home fire, and a Six Flags gondola accident rescue in 1978 that required several high-angle rescues.

Most of his career was spent at Metro West. The younger Silvernail also served as a captain at his father’s former fire district.

“It was just a great trip at Metro West,” Silvernail said when he arrived in Mehlville about his long service in that district. “I really miss the people there.”

Although Silvernail retired from Metro West in a dispute with its board in 2003, the fire district was in mourning with a tribute posted to Facebook Wednesday night.

“Tonight, our community lost a special man,” the fire district posted. “Retired Metro West Fire Chief Jim Silvernail, who served Metro West citizens with the utmost distinction and honor for over 30 years until his retirement in 2003, answered his last alarm and lost his battle with a tough illness.”

The Mehlville Fire Protection District posted to Facebook, “Chief Silvernail was a dedicated, respected leader whose charm and sense of fun made him a joy to work with. He was a mentor and a friend to everyone. Chief Silvernail cared deeply for those around him. We will always have extremely fond memories and wonderful stories to tell about him, and we feel privileged to have known him. He will be missed.”

The long list of honors for Silvernail includes serving as chairman of the Greater St. Louis Area Regional Communications Study Committee, for which he was appointed by the county executive, the St. Louis County Fire Standards Commission for 18 years, the Missouri Fire Service Advisory Board for 23 years, chairman of the Greater St. Louis Area Fire Chiefs Association, organizer of the first county fire academy, president of the West County Chamber of Commerce for two terms, West County Chamber Business Person of the Year in 1987, South County Chamber Citizen of the Year in 2010, and finally, the BackStoppers board.

The Mehlville Fire Protection District Board of Directors coaxed him out of retirement to serve as MFPD chief when Hilmer and Stegman took office. He served as chief for nearly five years before retiring again in February 2010.

“He was the perfect guy during obviously a period of huge transition and change, massive change,” Hilmer said. “That’s when we put the foundation down in those first couple years for everything that’s come since.”

By heading to Mehlville, Silvernail followed in the footsteps of his first mentor, former Pattonville Fire Chief Bob Palmer, who once served as an assistant fire chief in Mehlville and died in 2010.

“He told me the first day I walked in the firehouse: ‘OK kid, you want to be a good fireman or a bum?’ I said I wanted to be good. ‘OK, we’re not going to sit here and watch this TV. We’re going to get out there and do things,’” Silvernail remembered.

“I was 19 years old. That’s the reason I’ve been successful in the fire service. I got started off right with Bob. He was my mentor. I worship the ground he walked on.”

Silvernail was severely injured in a car crash on the job in the 1960s, but was able to recover. But the police officer traveling with him died. It was a reason that the BackStoppers was so close to his heart.

Under Silvernail’s leadership, Mehlville launched landmark reforms that have become integral to the district like its advanced life support pumper program, which has improved emergency response times and lifesaving capabilities. Under the program, the district’s fire trucks provide advanced life support, or ALS, instead of just basic life support for medical emergencies. The district also added a fifth ambulance and committed to fully staffing the rescue squad and training officers.

He also brought a stronger focus on customer service to the district. At the time he took office, the district had installed “zero” car seats for residents, Hilmer said. He started installing car seats and worked with the St. Louis County Department of Public Health to begin a bicycle-helmet program to hand out helmets to children.

Silvernail outlined much of what Mehlville could accomplish based on what he’d already done at Metro West, including cross-training firefighters to be paramedics and paramedics as firefighters, buying new equipment and constructing new firehouses. He also developed the dive team and debuted the district’s marine program on the Mississippi River, which was recently expanded with a larger boat.

Under his and the board’s leadership, the fire district moved away from an emphasis on seniority in promotion to an emphasis on education and training, Hilmer said at the time.

The district is just now accomplishing some of Silvernail’s original vision, such as a training facility like Metro West’s that is now under construction in Oakville.

“My biggest goal is to get a training center completed,” Silvernail said midway through his term as Mehlville chief. “I’m really an advocate on training. And I really want to try and improve that program.”

When Hilmer and Stegman were elected, then-Chief Ray Haddock, the assistant chief, two captains and a lieutenant retired rather than serve under the new board.

But Hilmer made the most of the situation by asking Silvernail to step in. In hindsight, Hilmer said he isn’t sure what he would have done without Silvernail.

The chief navigated some trying times at Mehlville, but he had the temperament needed for a position that required dealing with a board and firefighters’ union at constant odds. He seemed to get along with everyone.

Affton Fire Chief Nick Fahs, who served as the president of the union at Mehlville while Silvernail was in office, said his former chief would be greatly missed.

“The impact Chief Silvernail had on the fire service can only be equaled by the impact he had on the families of those he helped with the BackStoppers organization,” Fahs said. “His legacy will live on well past all of our lifetimes. All of us in the fire service and speaking for those in the south county region, we thank Chief Silvernail for his service and extend our thoughts and prayers to his family.”