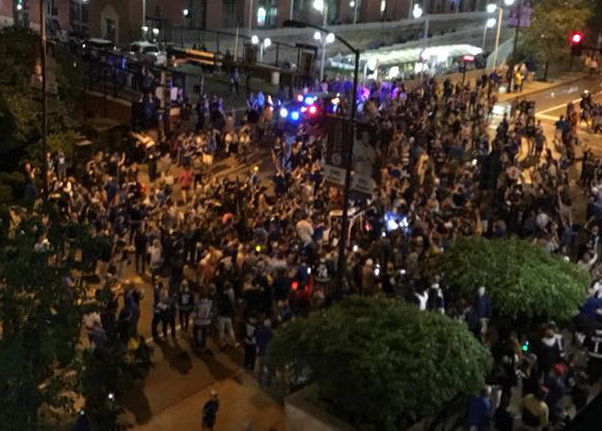 Pictured above: Fans celebrate outside Busch Stadium after the Blues won Game 7 of the Stanley Cup Finals June 12. Photo by Gloria Lloyd.

The St. Louis Cardinals have announced the Stanley Cup will make an appearance at Busch Stadium on Wednesday, June 26 when the team takes on the Oakland Athletics at 6:15 p.m.

The Cardinals will celebrate the St. Louis Blues’ Stanley Cup victory by featuring the Cup with Blues players during pregame and in-game ceremonies on the field, according to a news release.

As part of the promotion celebrating the Blues’ first-ever Stanley Cup win, 20,000 fans ages 16 and older will take home a “Gloria-ous” T-shirt, courtesy of TD Ameritrade. The T-shirt highlights the St. Louis Blues and their historic postseason run, as well as Cardinals catcher Yadier Molina.

During Game 7 of the Stanley Cup Finals in Boston, the Cardinals opened up Busch Stadium so that Blues fans could watch the game together. Despite pouring rain, the fans went wild, as seen below in the video below.

To purchase tickets, or for more information, visit cardinals.com/promotions.