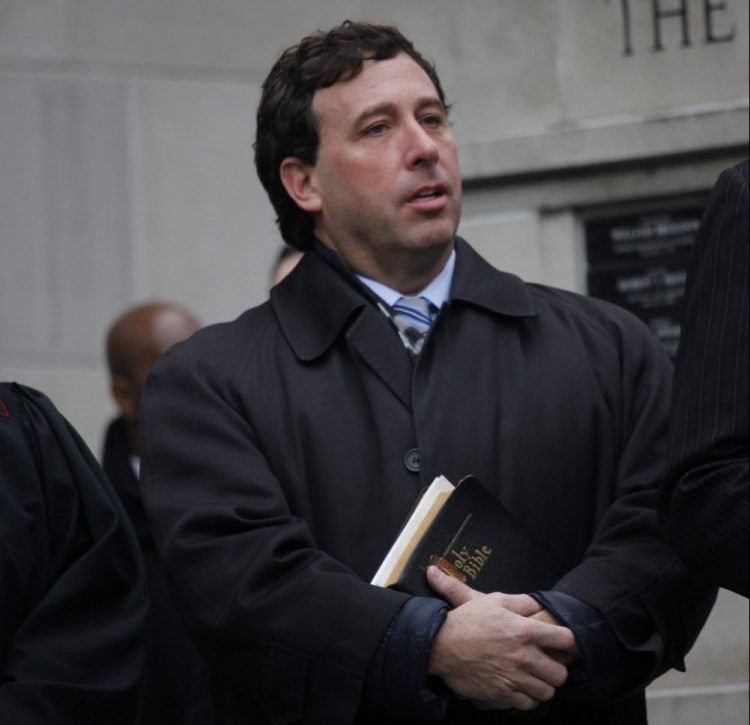 Pictured above: St. Louis County Executive Steve Stenger recites the Pledge of Allegiance prior to the swearing-in ceremonies for the St. Louis County Council on Tuesday, Jan. 1, 2019. Stenger won re-election to the county executive seat in November 2018. Photo by Erin Achenbach.

St. Louis County Executive Steve Stenger emphasized last week that a federal subpoena is targeting the county, not him, but when given the opportunity, he also didn’t take the chance to say he was innocent of any wrongdoing.

A contentious County Council meeting over access to documents was nothing new, but this time the document the council said the administration was keeping from it was a subpoena.

The council will continue pressing for access to the subpoena, with the goal of giving it to every council member and to the public, said 6th District Councilman Ernie Trakas, R-Oakville.

The largest and most immediate ramification of the subpoena came outside county government, as Better Together announced that Stenger — previously the figurehead of the organization’s plan for a city-county merger starting in 2021 — wouldn’t get two years added on to his term to automatically serve as the new city’s “metro mayor.” The first metro mayor election would now happen in 2022 instead of 2024.

And the organization changed language that said the metro mayor would be the county executive as of Jan. 1, 2019, to whoever is in office Jan. 1, 2021. That means that if Stenger leaves office for any reason, he couldn’t make an almost immediate comeback as metro mayor.

A Stenger spokesman did not respond to a request for comment on those changes.

Better Together Executive Director Nancy Rice said the changes had been in the works for 10 days and had nothing to do with the subpoena. But the announcement came the same day Page went public.

Stenger declined formal interview requests last week, but was caught twice by reporters and asked about the inquiry.

In an interview with a Post-Dispatch reporter conducted as Stenger and county Communications Director Cordell Whitlock came out of a downtown Clayton Starbucks March 27, Stenger called the subpoena “routine” for a top official.

He declined in the same interview to confirm that he hired top defense attorney Scott Rosenblum.

That same day, KMOX reporter Kevin Killeen showed up at a meeting of the East West Gateway board, which Stenger serves on along with the executives from around the region. To a series of questions about the subpoena, Stenger repeated the same answer — essentially the same as his previous statement.

“What I’m able to say at this point is that the county was served a subpoena, and we intend to fully cooperate with that subpoena and provide any information that’s sought,” Stenger said.

The reply was the same when Killeen asked, “Can you assure the voters who trust your brand that you’ve done nothing unlawful?” and “Can’t you say this is an outrage, I’m innocent, they’re going after the wrong person?”

“No, I don’t think this is the time for that,” Stenger said. “We’ve been served a subpoena and we’re going to comply. It’s that simple.”

Stenger himself has served as a criminal defense attorney in federal cases, so he’s familiar with the process. And so he and Rosenblum would both know that the most prudent legal tactic is for Stenger to be extremely careful with his words, said Trakas, also an attorney.

“Anything he says now is going to be subject to potential cross examination,” Trakas said.

Whatever the reason for the lack of a vigorous response now, in the past Stenger has had a notably different reaction when he was asked about a potential federal investigation or about his longtime pattern of accepting donations from developers who want to do business with the county — a practice that first drew criticism when Stenger was the 6th District councilman.

He’s always vehemently denied that he did anything wrong. The business community just likes his policies, he’s said.

And he promised there wouldn’t be a federal investigation. In fact, two federal investigations into county government were one of his primary talking points to convince voters to elect him instead of former County Executive Charlie Dooley in the August 2014 county executive primary.

Dooley even made a triumphant comeback of sorts in comments to the Post- Dispatch.

“If he’s not under investigation, then why did he hire the attorney he did hire?” Dooley said. “All the time I was county executive, I was never investigated or subpoenaed. Never.”

He added, “They (federal authorities) didn’t ask for anything from me … Every time I ran for office, the paper or radio said I was under investigation, which wasn’t true. Remember the time the FBI even came out and said I wasn’t? It was because I was an African American and people would believe (expletive) about African Americans. Didn’t matter what I said, it made no difference.”

And even some old friends were diverging from Stenger last week on aspects of the subpoena. Jane Dueker, a longtime ally of Stenger who appears as a commentator on KMOX and in the past has been a frequent defender of Stenger on Twitter, remarked on the radio March 29, “It’s certainly not routine. It’s not routine to get a subpoena… It’s clearly not good to be on the other end of a subpoena.”

And St. Louis Mayor Lyda Krewson, who has been closely aligned with Stenger, distanced herself.

Asked if she still supported Stenger, Krewson said, “You know what, it’s my job to work with whoever the county executive is. So I’m going to continue to work with the county on every issue that we can.”

Stenger’s office pointed out to reporters last week that it was not Stenger who was the target of the subpoena, it was St. Louis County.

But it was not clear why Stenger would have to hire a criminal defense attorney if he was not the target of the subpoena.

Rosenblum has donated to Stenger before, and also served as the defense attorney for the man who was prosecuted federally for giving heroin to Stenger’s nephew, Mitch Stenger, the night he died of a heroin overdose. He has also represented rapper Nelly and served on the legal team of Gov. Eric Greitens last year.

Stenger only ventured from his script to tell Killeen that he would not ask taxpayers to pay for any attorney — although he wouldn’t confirm who the attorney was.

“That sort of thing would never be paid by taxpayers, but I’m not going to confirm (hiring Rosenblum) right now,” Stenger said. “I’m just going to say that we’ve been served a subpoena and we’re fully compliant.”