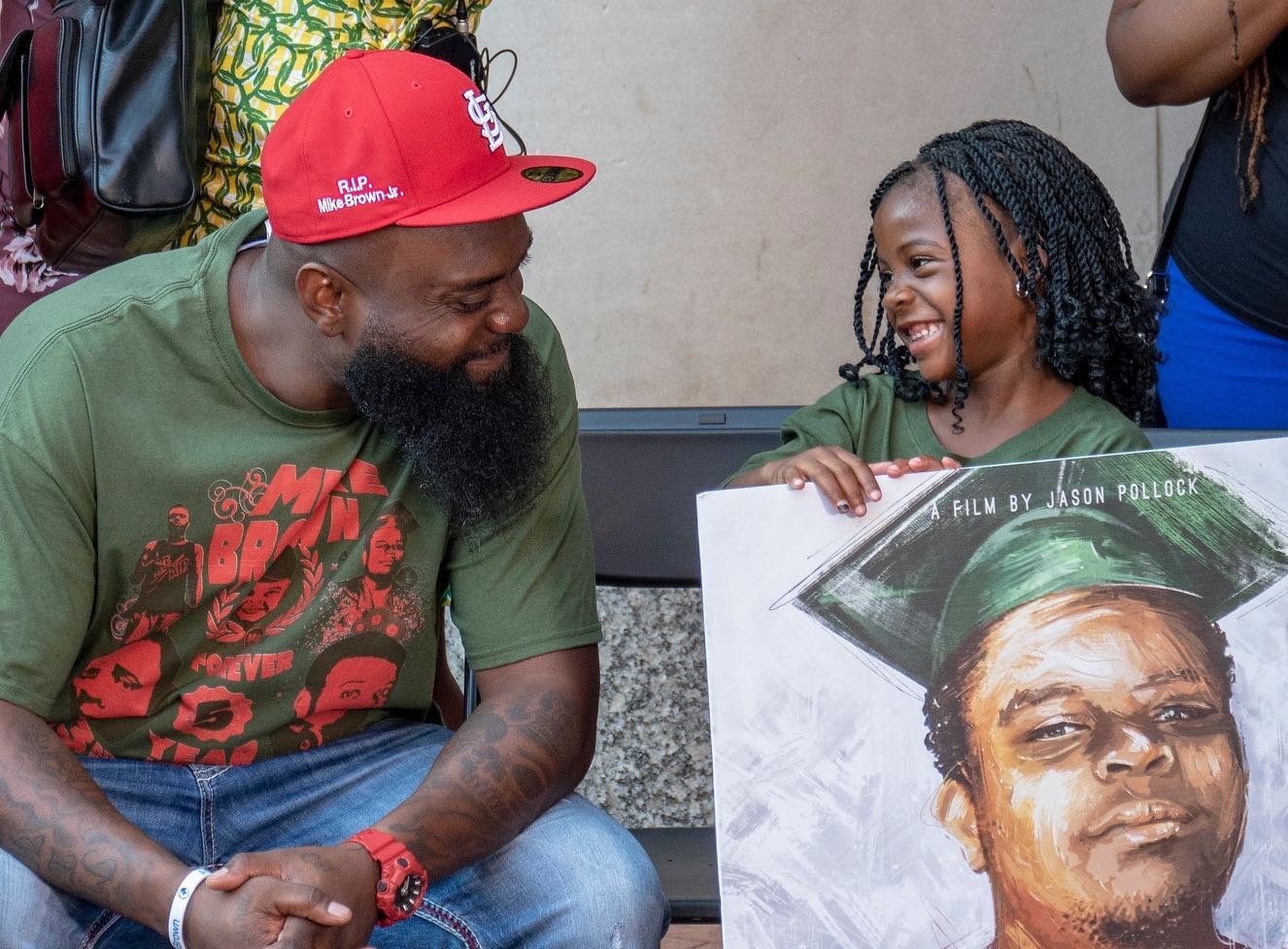 Pictured above: The Michael Brown Chosen for Change Foundation posted this photo of Michael Brown Sr. and his youngest daughter Mikelle taken before the press conference on Facebook.

A month after Michael Brown Sr.’s call for St. Louis County prosecutors to reopen the investigation into his son’s death in Ferguson five years ago, county Prosecuting Attorney Wesley Bell has not yet given an indication whether he’ll reopen the case.

A spokeswoman for Bell did not respond to multiple requests for comment for this article.

Michael Brown’s father held a press conference at the St. Louis County Justice Center on  Aug. 9, the five-year anniversary of his son’s death on Canfield Drive in Ferguson, to call for Bell to reopen the case.

“The whole nation knows the truth, yet this city still continues to do nothing, so I’m requesting for Wesley Bell to reopen this case,” Brown said on the steps of the building where Bell’s office is located.

Former Ferguson Police Officer Darren Wilson — then a Crestwood resident —  shot and killed Michael Brown, 18, on Canfield Drive in Ferguson, a moment that turned the world’s focus on Ferguson and St. Louis County during weeks of civil unrest, looting and tear gas-filled encounters with police. Ferguson and St. Louis County became a hashtag and an international symbol of police conflict and race relations, the beginning of a national conversation that continues.

Brown was unarmed, and witnesses initially told news cameras that he had his hands up in surrender. Both the U.S. Department of Justice under President Obama and a St. Louis County grand jury found no credible evidence to support many witnesses’ contention that Wilson shot Brown while the teenager was surrendering with his hands up, which led to the most popular protest refrain, “Hands Up, Don’t Shoot.” The DOJ report also said the most credible witnesses to the shooting itself backed Wilson’s account of events that he shot Brown in self-defense after the unarmed teenager attacked the officer.

But all Michael Brown Sr. cares about is justice for his son, who he said did not commit a strong-arm robbery on a shop owner moments before the shooting, as was captured on surveillance video.

In the years since the killing, the father said he had “no answers, no apologies, no justice.”

And he believes Wilson should be prosecuted for murder.

“Justice has not been served,” the father said. “My son deserved to live a full life, but a coward with a badge chose to end his life. My son was murdered in cold blood with no remorse and no medical treatment.”

Then-county Prosecuting Attorney Robert McCulloch declined to press charges against Wilson after the grand jury looked at the evidence and declined to return an indictment.

In one of Bell’s first acts as prosecutor after defeating McCulloch in a shocking upset in the Democratic primary last year, he fired the assistant prosecutor who had presented the Ferguson evidence to the grand jury, Kathi Alizadeh. Bell took office Jan. 1.

But whether that means he agrees that the Ferguson evidence deserves another airing in court is unclear.

Brown said he had a conversation with Bell about the case, and the new prosecutor said he wasn’t sure if it would be reopened and that assistant prosecutors would “check the evidence clearly” to see if that could happen.

Brown said he wanted to emphasize that the press conference was “not an ambush” and “not an attack” on Bell.

“I definitely respect this man as a man,” Brown said of Bell. “Hopefully he can see something that was flawed, and we can reopen this case.” He added, “If it’s able to be opened, we’ll have our day in court, if it’s not, they just won’t be doing anything.”

Brown believes “everyone lied” to the grand jury, which made the wrong decision and he’s “not stopping until we get some type of justice.”