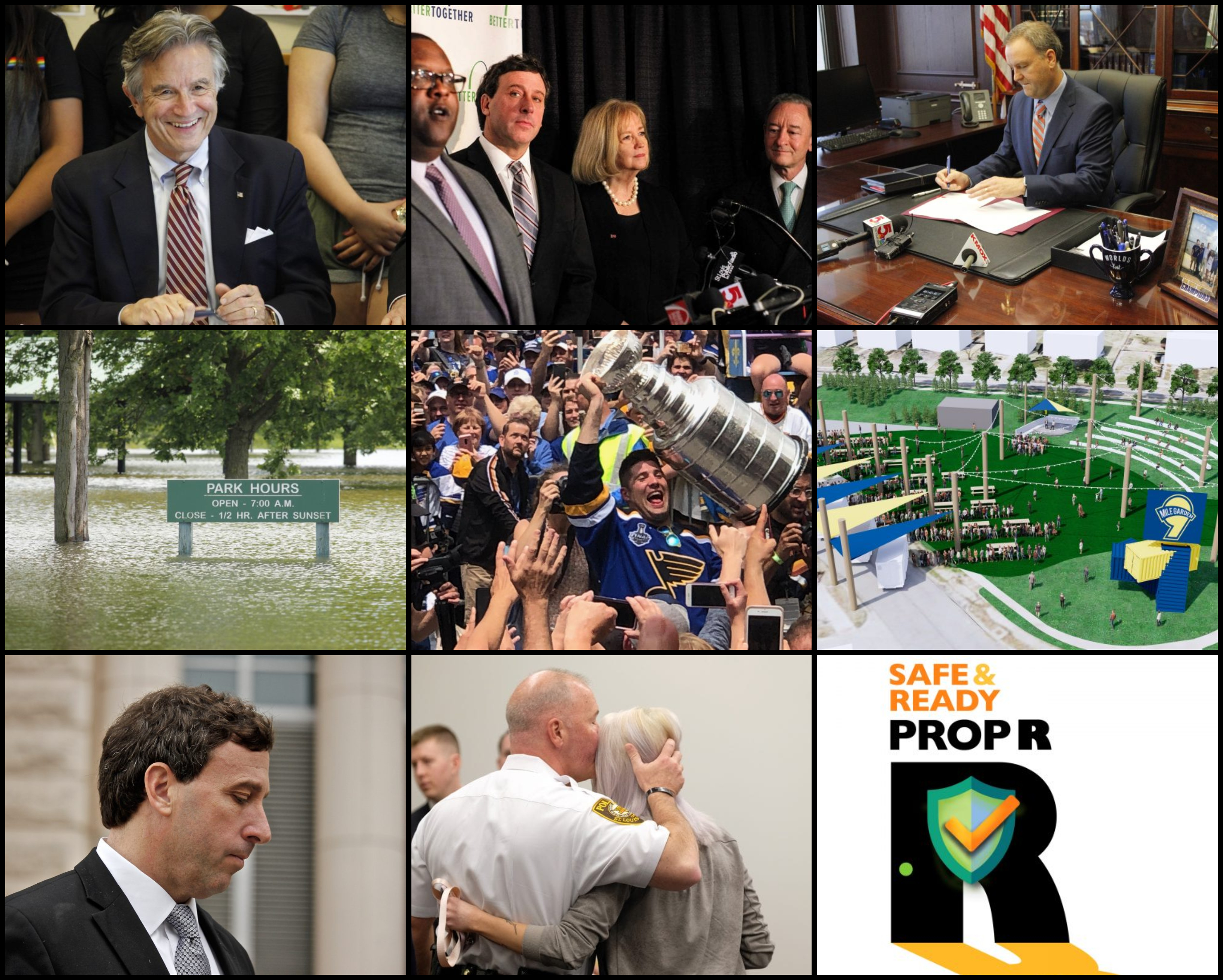 With the leaked news that nonprofit organization Better Together was proposing a sweeping city-county merger that would merge St. Louis County and St. Louis city into one new “megacity” that would be one of the largest cities in the nation, 2019 had one of its top stories before it began. At that time, the Blues were in last place in the league.

But then in the span of five days, merger “Mega-Mayor” Steve Stenger went from county executive to convicted felon, headed to prison for four years. The merger was called off. But regionalism was a decisive theme throughout the year, with the year ending on the failure of the Loop Trolley and the question of whether the region should fund it, and the city’s decision to drop its effort to privatize St. Louis Lambert International Airport.

With the very future and existence of most governments in the St. Louis area questioned for the first few months of the year, hockey was a welcome distraction. That’s a regional issue we can get behind.

1. We wanted the Cup — and we got the Cup. The Blues have always been a good team, but the Stanley Cup had eluded them. Decades from now as memories of Better Together and Steve Stenger fade, everyone will remember “Gloria” and the surprise of going from last to first. And even those who might not remember it all, like Blues legend Brett Hull, enjoyed every minute of it.

The Blues couldn’t have done it without No. 7, Oakville High School graduate Pat Maroon, who scored the Game 7-winning double overtime goal against the Dallas Stars to get the Blues to the Western Conference Finals for the first time ever.

The Stanley Cup made its way to South County at least three times, visiting Green Park, Sunset Hills and Grantwood Village. Let’s do it again this year.

2. Better Together’s merger. Nobody really wanted Better Together, but we got it anyway. For years, residents in South County led by Gravois Republican Committeewoman Jennifer Bird had warned of a shadowy effort for a city-county merger, funded by billionaire megadonor Rex Sinquefield. It turned out they were right, but the downfall of the city-county merger was almost as swift as Stenger’s. Near the end of the year, Better Together board member Mike Hejna said he doesn’t believe Better Together still exists. We’ll find out in 2020 whether that’s true.

3. Steve Stenger. Stenger’s swift downfall was shocking, but the quid-pro-quo allegations themselves weren’t news to The Call’s readers: We first asked him in 2014 whether he took campaign donations in exchange for political favors, the first media to ask him that question. His answer? Of course not. Business interests just liked his policies. But that very year at Sam’s Steakhouse in Affton, Stenger concocted a pay-to-play scheme with businessman John Rallo. And as federal Assistant Prosecuting Attorney Hal Goldsmith told a county audience in October, “That’s illegal.” Goldsmith’s investigation and its ramifications are still ongoing.

4. Lindbergh and Bayless voters pass major bond issues to revamp their campuses. It wasn’t necessarily a good year for government in St. Louis, but it was a milestone year for two school districts. As residents mostly rebelled against merging their various governments into one, South County voters showed strong support for improving their school districts’ facilities. Lindbergh Schools and Bayless Schools both passed bond issues in April.

Lindbergh will build a new 21st-century Lindbergh High School at the site of the current one and add new secure entrances to all the elementary and middle schools that don’t already have one. Bayless will expand Bayless Junior High so that its students don’t have to walk outside to Bayless High School for lunch and the library.

And Mehlville School District voters may get their chance to weigh in soon: Mehlville officials said they will look into placing a 2020 bond issue on the ballot that would extend 2000’s Proposition P facilities tax to improve Mehlville’s 20 schools.

With the ink on Stenger’s resignation only a few hours old, then-County Council Chairman Sam Page — Stenger’s archnemesis — scheduled an emergency council meeting for that night to elect new leadership. And despite an opposition campaign from then-Councilwoman Hazel Erby and her political backers, Page was elected county executive by the council 5-1. He then hired Erby to a newly created $121,000 county job, creating a temporary Republican majority and two vacancies on the council. Two Democrats were elected, and they were set to take full control of the council Tuesday — after The Call went to press. The shakeups in county employees, department heads, policies and legislation continue. Page is running for election this year with a Democratic opponent in county Assessor Jake Zimmerman.

6. Property assessment. As the economy and real-estate market have improved from the Great Recession, property values saw the biggest hikes this year since the pre-recession days. In an unexpected twist, the area with the steepest spikes — 30 percent or more — was Lemay and the Hancock School District. Many people angry about their assessments and the process that led to them spoke out at various town halls. In the end, assessments went back down, but still reached levels of 11 percent in Lindbergh Schools, 12 percent in the Mehlville School District and 15 percent in the Mehlville Fire Protection District.

7. Flooding, in various forms. Strong floods in the summer along the Mississippi River flooded homes in Lemay at levels that hadn’t been seen since the Flood of 1993. With the help of Councilman Ernie Trakas, residents are currently pursuing FEMA buyouts. But even flooding not caused by Mother Nature wreaked havoc in South County, with flooding from a Missouri American Water main sending waves of water into Crestwood City Hall, causing hundreds of thousands of dollars in damage and ruining file cabinets full of records. The city is taking advantage of the restoration period to add another $700,000 of upgrades at City Hall.

8. Crime and punishment. The former county executive wasn’t the only criminal in the news. Whether crime went up or not, it seemed like it did. And two huge murder cases came to an end in 2019. A jury convicted Trenton Forster, now 21, of first-degree murder for shooting and killing Officer Blake Snyder in Green Park in October 2016. In June, John McLaughlin took a plea deal for murdering his wife, Linda McLaughlin of Sunset Hills, in 2015. He got a 23-year sentence.

10. Affton rising. We look forward to the day when the new Tower Tee and a new Affton Plaza food truck garden — the first in Missouri — are open in Affton. Both are slated to debut in 2020.