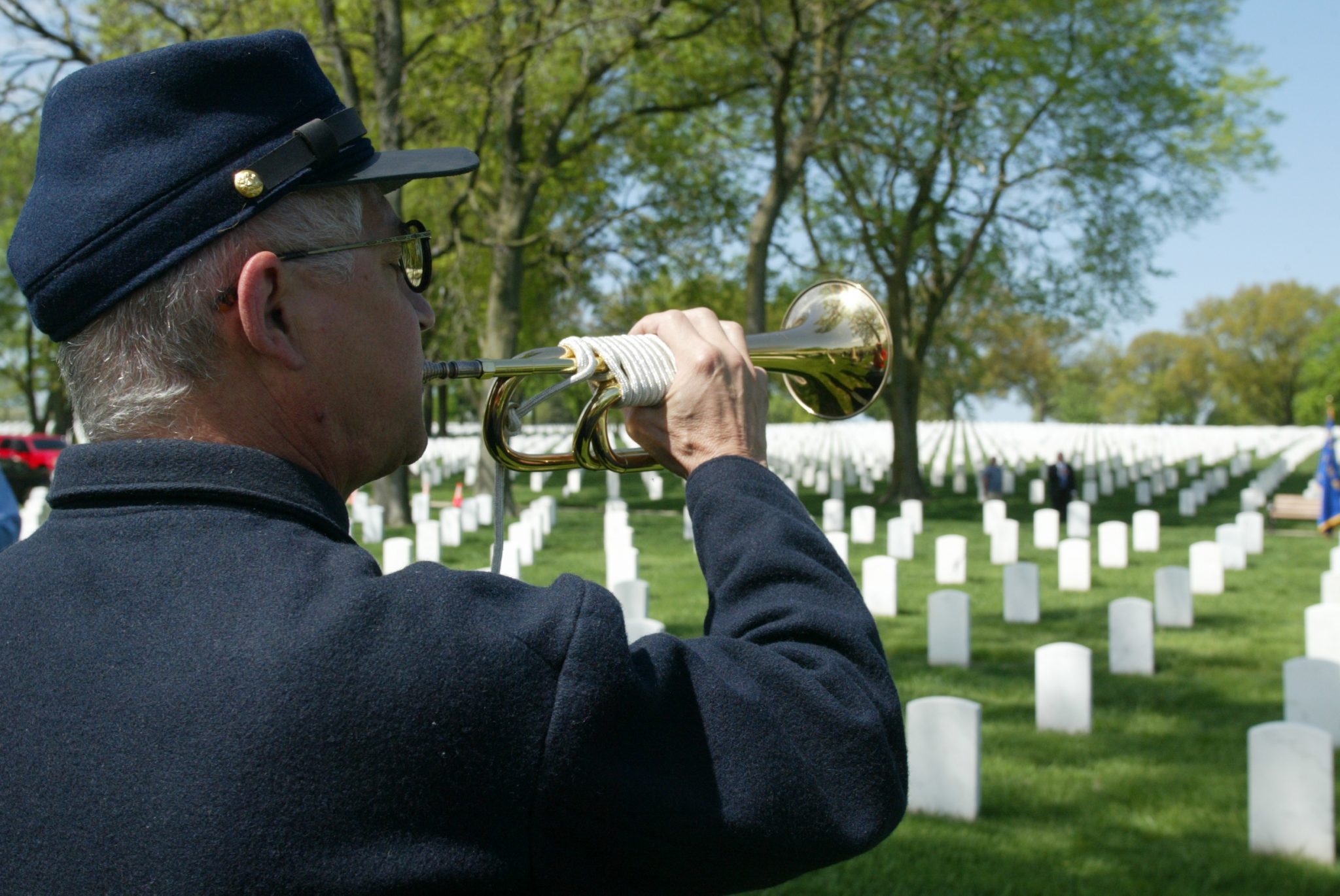 Pictured above: Marc Garcia plays the trumpet at a ceremony at Jefferson Barracks National Cemetery in May honoring the 51st Colored Infantry. Photo by Bill Milligan.

The County Council agreed unanimously last week to sell half of Sylvan Springs Park to the federal government to expand Jefferson Barracks National Cemetery, with some council members casting their votes through tears.

The idea of selling county parkland for a cemetery expansion evenly divided the community when it was first proposed in 2015 but, this time around, saw little public opposition after the county fought for years in court to go through with the $2.5 million sale.

The county will sell 38 acres of the 72-acre park to the federal government, which will use it to expand Jefferson Barracks through 2048.

Leading up to the vote at the Sept. 4 meeting, 6th District Councilman Ernie Trakas, R-Oakville, said it was with “gratefulness, humility and pride” that he sponsored the bill approving the sale to the cemetery, which he called a “hallowed place… not just to St. Louis, but to our country.”

The irony of the situation was that military members buried at the national cemetery fought and died for the very right that people exercised to speak against the cemetery expansion, Trakas noted.

“It would seem that this decision would be an easy one — but the great thing about our democracy is people have a right to be heard,” the councilman said. “This council has heard from all sides, and there is great irony at work here…. There’s no shortage of irony in the fact that the very people asserting the right to protest the sale of this parkland stand on the shoulders of giants buried at Jefferson Barracks, many of whom gave the last full measure of devotion defending the right to protest.”

Trakas recounted the cemetery’s history, including the burials of both Union and Confederate soldiers and graves that even predate the Civil War. Jefferson Barracks is the oldest operating military installation west of the Mississippi River. Among the presidents who served there were Zachary Taylor, Ulysses S. Grant and Dwight D. Eisenhower. The generals who have been stationed there are a who’s who of the most well-known generals in American history, including William Tecumseh Sherman, Robert E. Lee, James Longstreet and Hap Arnold, who was the only soldier to ever hold the rank of five-star general in two military branches.

“That list pales in comparison to the thousands of unsung warriors whose final posting is Jefferson Barracks,” Trakas said.

To prove his point, he listed some of those unsung heroes, including World War II Sgt. James Odum and Vietnam War Lt. Michael Blassie, who served as the “Unknown Soldier” in Arlington National Cemetery’s Tomb of the Unknown Soldier for Vietnam until his remains were identified and brought back home to Jefferson Barracks.

“His final station is in Jefferson Barracks,” Trakas said of Odum through tears. “He lived to bear his country’s arms. He died to save its honor. He was a soldier, and he knew a soldier’s duty.”

Trakas was not on the council during the original debate on the sale, and neither was 4th District Councilwoman Rochelle Walton Gray, D-Black Jack, a former member of the Missouri Veterans’ Commission who said she fully supported the bill and, in her own work on behalf of veterans, has emphasized the contributions of female veterans.

Each November for the last few years, 7th District Councilman Mark Harder, R-Ballwin, has appeared at the cemetery for events surrounding Veterans Day. He said he’s promised each year that the sale would happen, and this year he was happy to see it go through.

“This past November, I said we’re going to get this done and it’s done,” Harder said, also through tears.

After the vote, both the council and a crowd of veterans who had come for several meetings to speak in favor of the bill stood up and clapped.