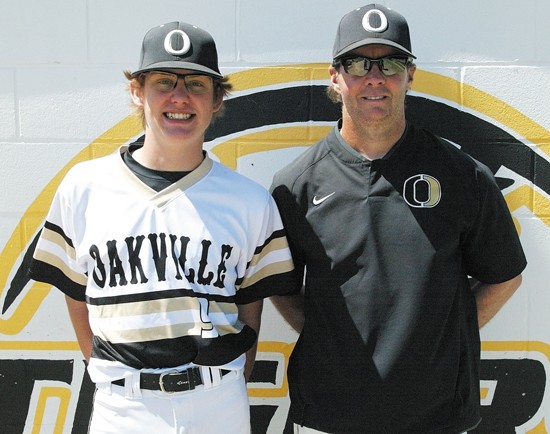 Pictured above: Oakville senior hurler Blake Tribout is pictured with head baseball coach Rich Sturm between games of the Tigers’ April 16 double header. Blake started the first game against St. Mary’s and came away with the win. Photo by Bill Milligan.

Blake Tribout is feeling good about living his dream at Oakville Senior High School this year.

The 16-year-old senior’s mother, Karen, won the Call’s 2008 Mother of the Year Contest with his essay about learning how to deal with diabetes and how much help his mother had been in the process.

During the Call’s 2008 interview, Blake mentioned his dream of one day playing baseball for Oakville High School.

On April 16, Blake started Oakville’s doubleheader against St. Mary’s High School and threw 4⅓ innings, earning the 6-4 victory for the Tigers and giving up one earned run.

“Baseball’s my favorite sport,” Blake told the Call. “When I was in elementary school, I always used to come out and watch Oakville High School baseball games, and I always wanted to be a part of the team.”

He wanted to be an outfielder, but hitting just wasn’t his thing, so he took up pitching. This season, Blake has pitched in six games, including one against Lindbergh High, and has a 1-1 record with a 3.34 ERA.

“I started against Lindbergh. It was a rough game,” he said of the March 22 contest. “The wind was blowing the ball everywhere.”

Blake’s road to varsity baseball at Oakville has been clouded by his diabetes, as he takes about 5,000 shots each year.

This March marked the 10-year anniversary of Blake’s diagnosis with diabetes.

“March 24, 2006, he was diagnosed,” said Blake’s father, Mark. “(Oakville head baseball coach) Rich Sturm saw your (2008) article and he came out and said, ‘Keep your spirits up, follow your dreams and someday you may play for Oakville.'”

When Blake was first diagnosed with diabetes, doctors encouraged him to keep active — and he certainly has, according to his father.