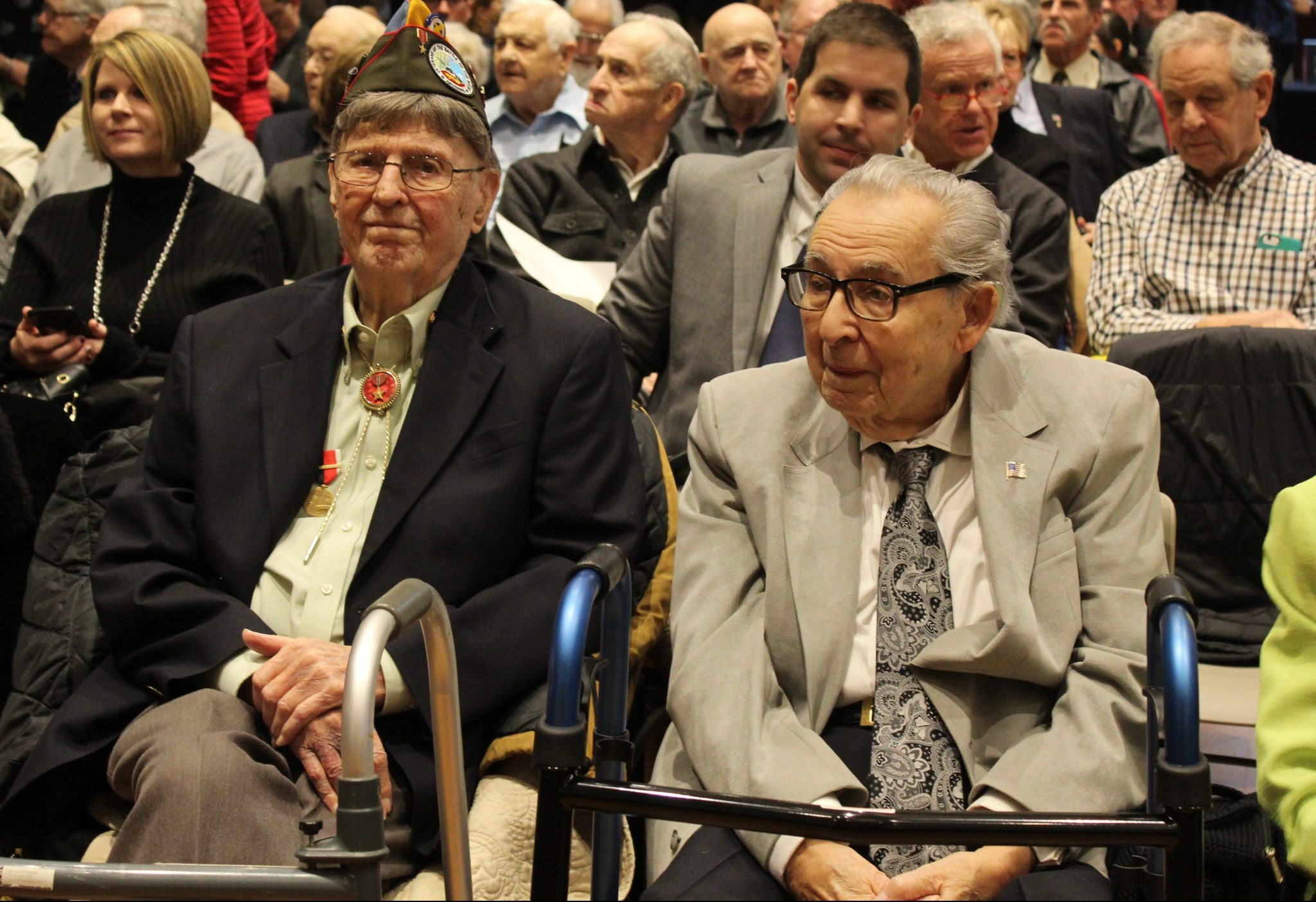 Pictured above: Eugene ‘Gene’ Harmack, 98, left, formerly of Affton, and Alfred Villagran receive awards from France Jan. 23 for their service.

A longtime south county resident and two other area veterans were awarded France’s highest distinction, the Legion of Honor, during a ceremony at the Soldiers Memorial Military Museum last week.

The consul general of France for the Midwest region, Guillaume Lacroix, presented the Legion of Honor medal to Affton resident Eugene Harmack, Glenn Harrison of O’Fallon and Alfred Villagran of Chesterfield for their participation in the liberation of France during World War II.

The Legion of Honor is the highest distinction that France awards to those who have achieved remarkable deeds for France. Founded by Napoleon Bonaparte in 1802, the National Order of the Legion of Honor recognizes eminent service to the French Republic. Recipients of this honor are named by a decree signed by the president of the Republic.

Harmack was born in St. Louis in 1920 and entered into active service in September 1942. In May 1944 he arrived in England, where he joined the 83rd Infantry. He was tasked with setting up communication lines during combat. On July 12, 1944, as all communications were down during heavy fighting near Sainteny (Manche), Harmack successfully retrieved a vehicle trapped between lines to use its radio to call for support. Disregarding his own safety, he drove to a covered position, receiving shrapnel wounds. He was awarded the Bronze Star with Oak Leaf Cluster and V for Valor. Harmack was also awarded a Combat Infantry Badge for his actions in France, the European African Middle Eastern Campaign Ribbon, five Bronze Battle Stars, the Victory Ribbon, three Overseas Bars and the Good Conduct Medal.

Harmack participated in the following campaigns: Normandy, Northern France, Rhineland, Ardennes and Central Europe. On June 14, 1944, he was sent to Omaha Beach. Weather conditions resulted in him being stranded on the Channel for four days. He landed on June 19. Harmack participated in the liberation of St. Malo. He also took part in the Battle of the Bulge, where he suffered from frostbite.

Harmack lived in Affton until a recent move to an assisted-living center in Kirkwood.

Harrison was born in Guymon, Oklahoma in 1920. He enlisted in September 1941. He was assigned to the 96th Bomb Group and sent to Snetterton Heath, England, a Royal Air Force base. Harrison flew 17 missions in 29 days. During his first mission in France, his plane was hit by enemy flak and lost two engines. As they made their way across France toward the coast, a third engine caught fire and they ditched the aircraft in the English Channel. The plane sank but the crew managed to escape, climb onto a dinghy and was rescued by a British Corvette. During his 17th mission in June 1944, he was shot down over Magdeburg, Germany and captured. He was sent to Stalag Luft III (Poland) until the camp was evacuated in January 1945. Following the evacuation, Harrison was transferred to Stalag VIIA and was part of the winter “Death March,” the 300-mile trek to Mooseberg, Germany.

Villagran was born in East Orange, New Jersey in 1923. He flew 33 missions as a radio operator and gunner with the 369th Bomb Squadron, 306th Bomb group, 8th Air Force. On his first mission to Munich his plane was shot down over the target. Having lost two engines, the plane fell 7,000 feet. Getting the plane under control, the crew headed to the English Channel. They were picked up by three enemy fighters and lost the third engine. Now heading to an emergency field in England, they were attacked again by three planes.

A U.S. warplane in the area defended them and shot two planes, and Villagran shot the third one. Villagran is the last surviving member of the original crew.

Villagran was honorably discharged at Fort Dix, New Jersey in May 1945. Among many awards, he received the Air Medal and the European African Middle Eastern medal.