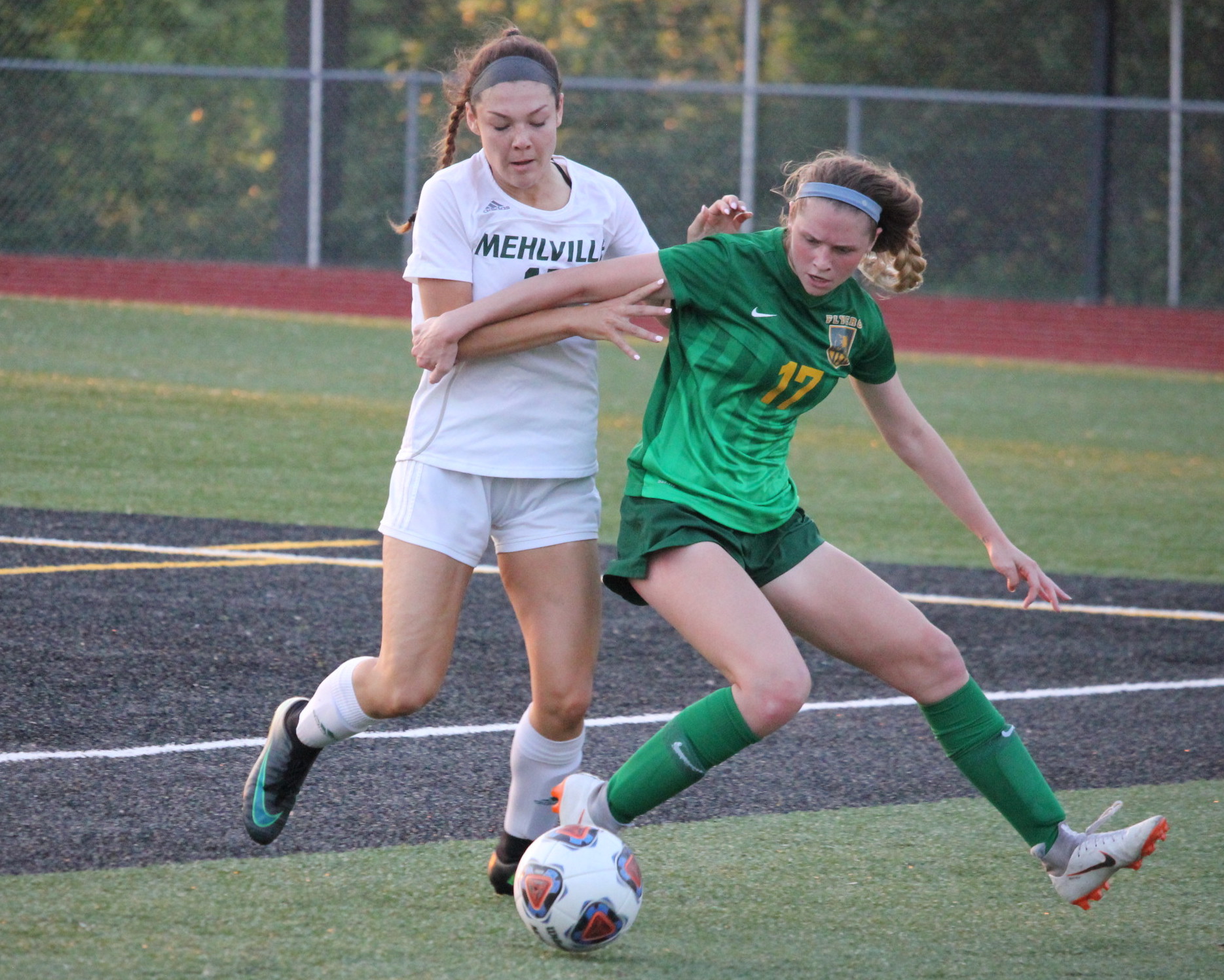 Pictured above: Lindbergh junior Maura Haegele, right, defends the ball from Mehlville sophomore Kailee Wisber during a game at Oakville High School May 15. With Lindbergh’s 1-0 overtime win against Mehlville, the team advanced to sectionals against Jackson High School May 21. Photo by Erin Achenbach.

The Lindbergh girls soccer team battled its way back to the Missouri Class 4 state quarterfinal game, overcoming a three-game losing streak that finished out the regular season to become one of the best teams in the state in 2019.

The Flyers (16-9) won state sectionals last week and were set to head to the state quarterfinals Saturday — after The Call went to press early for Memorial Day. At the time The Call went to press, the soccer team was riding a three-game winning streak, including a May 21 2-1 overtime win in sectionals at Jackson. Lindbergh freshman Morgan Goodrich scored the game-winning goal at the 85th minute to give the Flyers an impressive victory on the road.

“We talked about how we have to believe in the way that we play our game,” Lindbergh head coach Mark Giesing said. “It was a great win against a really good Jackson team.”

Longtime coach Giesing was honest in saying that he normally does not like to move freshmen up to the varsity squad. But Goodrich had the skills of a veteran and the maturity to play at the varsity level. The gamble paid out huge dividends for Lindbergh.

“It was really a great goal,” Giesing said. “She showed a lot of composure in such a big game, and it was a quality finish.”

Lindbergh’s Julie Baudendistel gave the Flyers the 1-0 lead in the first half of play before Jackson gained the equalizer goal during the second half.

“It was a great possession goal,” Giesing said. “There was great buildup to that goal, and at the 12-minute mark we were really knocking the ball around with Maura Haegele getting the assist.”

In the state quarterfinal, Nerinx Hall (17-3-2) posed a multitude of issues for the Flyers as the Markers come off an impressive 2-1 win over Eureka. Nerinx Hall was riding an eight-game winning streak.

“They are going to pose some problems for us,” Giesing said. “They’re very good in the air, and they have good team speed overall. I think they’ll pose a serious physical challenge for us.”

Should the Flyers win at home against Nerinx Hall, they would face the winner of the Kickapoo vs. Lee’s Summit game in a state semifinal match at noon Friday, May 31, at the Swope Soccer Village in Kansas City.