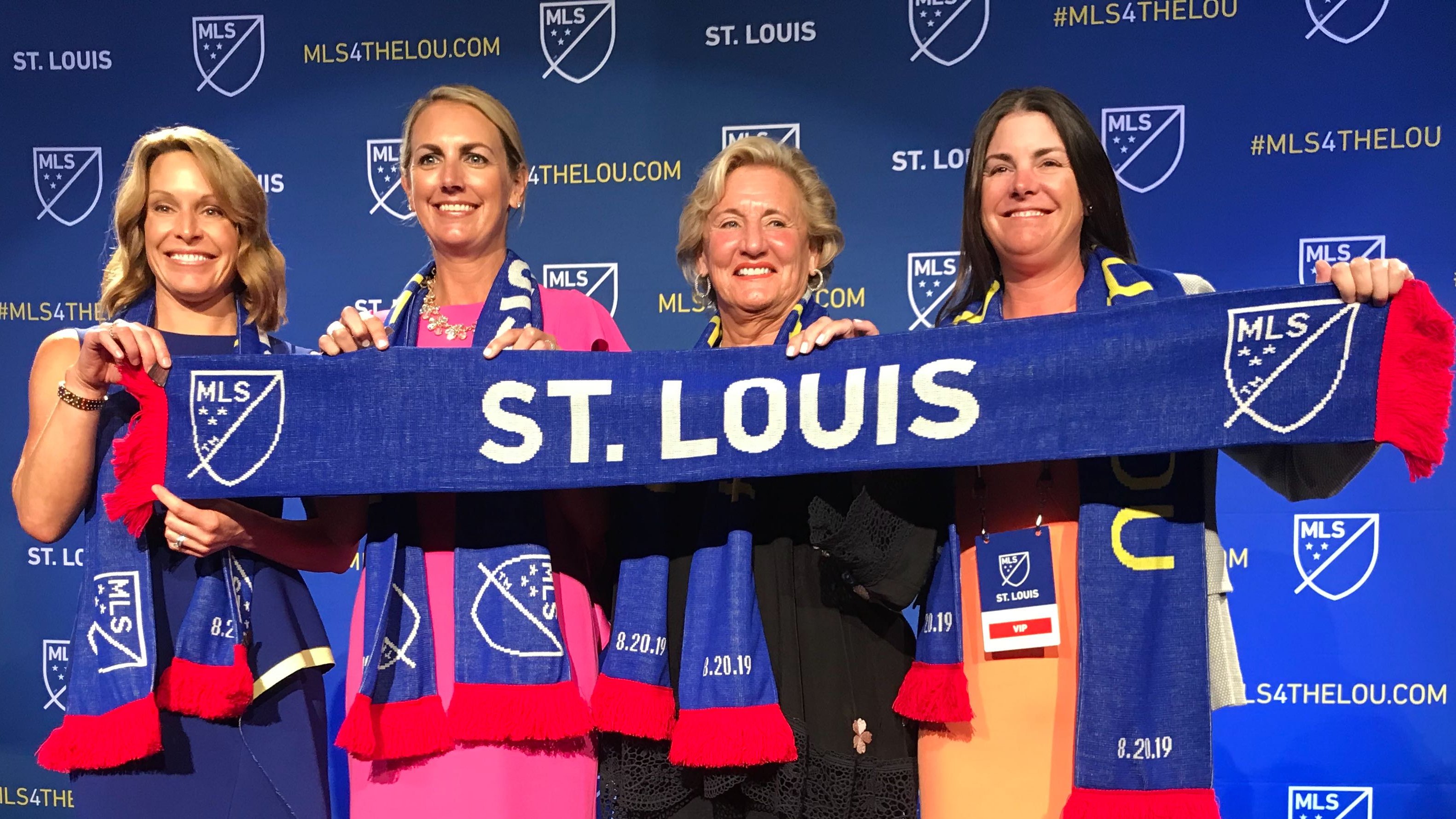 After decades of hoping for St. Louis soccer fans, it’s official: The city will get a Major League Soccer team.

Major League Soccer Commissioner Don Garber announced Tuesday in St. Louis that MLS has awarded an expansion team to the city, calling it a “city with a rich soccer tradition” that MLS has been eyeing as a team location for decades.

St. Louis’ MLS team, which does not yet have a name, joins the 11-time World Series champion Cardinals of Major League Baseball and the reigning Stanley Cup champion Blues of the NHL as the city’s three major professional sports teams.

“It is with great pride that we welcome St. Louis to Major League Soccer,” said Garber. “St. Louis is a city with a rich soccer tradition, and it is a market we have considered since the league’s inception.  Our league becomes stronger today with the addition of the city’s deeply dedicated soccer fans, and the committed and innovative local ownership group led by Carolyn Kindle Betz, the Taylor family, and Jim Kavanaugh.”

The St. Louis team will be the only MLS team in Missouri, since Sporting Kansas City, a member of the MLS Western Conference, plays across the state line in Kansas City, Kansas.

Reports that St. Louis would get the soccer team leaked last week, but no one confirmed the news until the official announcement. Garber hinted at what was to come Tuesday morning by tweeting a photo of a statue in downtown St. Louis with an MLS scarf.

Past efforts over the last 15 years to bring an MLS team to St. Louis had stalled, but an ownership group led by Carolyn Kindle Betz of the Enterprise Holdings Foundation and other members of the Taylor family that own Enterprise, one of the largest rental car companies in the world, succeeded where others had failed with a plan for a $250 million mostly privately financed stadium.

The sales pitch for a St. Louis soccer team also included the selling point that the team would be the first MLS team that is majority female-owned, one of few such teams in sports.

Along with Kindle Betz, the team is owned by six other female members of the Taylor family. The ownership group is completed by two highly respected executives who also have deep roots in the St. Louis business and philanthropic community: Enterprise Holdings executive chairman Andy Taylor, and World Wide Technology CEO Jim Kavanaugh, who was a professional soccer player and Olympian and also owns the St. Louis FC, a second-tier professional team that currently plays in Fenton.

Along with Kindle Betz and Garber, St. Louis Mayor Lyda Krewson and St. Louis Board of Aldermen President Lewis Reed welcomed the team Tuesday at the kickoff event. The Board of Aldermen will have to approve some incentives and financing for the stadium, such as special taxing districts that will cover only games and other stadium events.

With the announcement of the new soccer team along with the Blues winning the Stanley Cup and St. Louis hosting record crowds at the PGA Championship last year, several speakers at the kickoff event called 2019 the best year in St. Louis sports history. 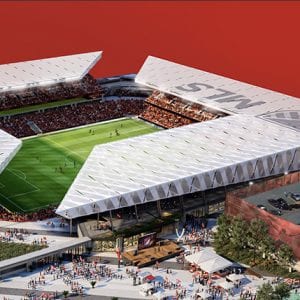 The stadium will have a seating capacity of 22,500 to 25,500 and will be open-air. Rendering courtesy of MLS4THELOU.com.

To welcome the team, a crowd packed the Palladium in St. Louis wearing #MLS4TheLou scarves inscribed with the date, 8.20.19. A group of “St. Louligans,” soccer fans who support St. Louis FC, chanted “STL, STL” as the event opened and later joined in a chorus of a song sung to the tune of “When the Saints Go Marching In”: “St. Louis is wonderful, St. Louis is wonderful.” They also chanted “CBK, CBK” to congratulate Kindle Betz.

In a video shown at the rollout, Kindle Betz said, “We wanted #MLS4TheLou. And we got it.” And after the event announcing her first day as a team owner, she proudly posed with a sign that said just that, in a similar style to youngsters going off to their first days at school.

In the MLS official statement on the new team, she reflected on how far the team has come in the year since the announcement that the group was seeking an MLS team in October at Mathews-Dickey Boys and Girls Club in St. Louis.

“It’s an incredible feeling to now be able to say, St. Louis is home to the first official majority female-led ownership group in MLS,” said Kindle Betz. “Our MLS team and stadium will only add to St. Louis’ renaissance currently underway and will provide us with a great opportunity to bring together many different segments of the community, uniting people in their love for the game.”

St. Louis’ club and its new downtown soccer stadium are central elements of a major development project in the Downtown West district near Union Station, which will see the St. Louis Aquarium open next year and a new Ferris wheel potentially open this year.

In addition to the stadium, the development will include mixed-use retail, restaurants and gathering spaces open year-round to the public.  The project will support the continued revitalization of St. Louis, a community that is regarded as one of the best places in America to raise a family and cherished for its blend of business, cultural, educational, and sports institutions.

The addition of St. Louis to MLS is the latest pivotal chapter in soccer’s explosive growth in North America. Krewson and other speakers emphasized how a professional soccer team will enhance St. Louis’ image on the world stage, since soccer is so widely followed internationally.

The city — regarded by many as one of the most passionate soccer markets in North America — has a diverse population, devoted fan base, and great tradition in the game. The U.S. team that upset England in the 1950 FIFA World Cup included five American immigrants from the St. Louis neighborhood known as “The Hill.” The men’s team at St. Louis University has won 10 NCAA championships, and the Hermann Trophy — the Heisman for college soccer — is awarded annually at the Missouri Athletic Club.

The new MLS club is expected to be immensely popular, as sports fans of St. Louis have a deep history of supporting soccer, the MLS said. The U.S. Women’s National Team’s “friendlies” at Busch Stadium in preparation for the 2015 and 2019 FIFA World Cups each drew more than 35,000 fans — two of the top three crowds for the U.S. for non-World Cup games during that four-year span. In 2015, the U.S. Men’s National Team defeated St. Vincent and the Grenadines in a World Cup qualifier before more than 43,000 fans at Busch Stadium.

The city’s USL team, St. Louis FC — whose arrival in 2015 was spearheaded by Kavanaugh, who played soccer professionally and at St. Louis University — has amassed a spirited following. This year, St. Louis FC advanced to the semifinals of the Lamar Hunt U.S. Open Cup.

With the addition of the MLS team in St. Louis, 18 clubs have joined MLS since 2005, “fulfilling a vision for strategic expansion that has transformed the landscape of professional soccer across North America,” the league said in a news release.

Home to nine Fortune 500 companies and several of the world’s largest privately-held businesses — including Enterprise Holdings and World Wide Technology, the club also is expected to receive strong support from the city’s corporate community. More than 20 CEOs from St. Louis-based businesses met with Commissioner Garber and club ownership prior to today’s announcement.