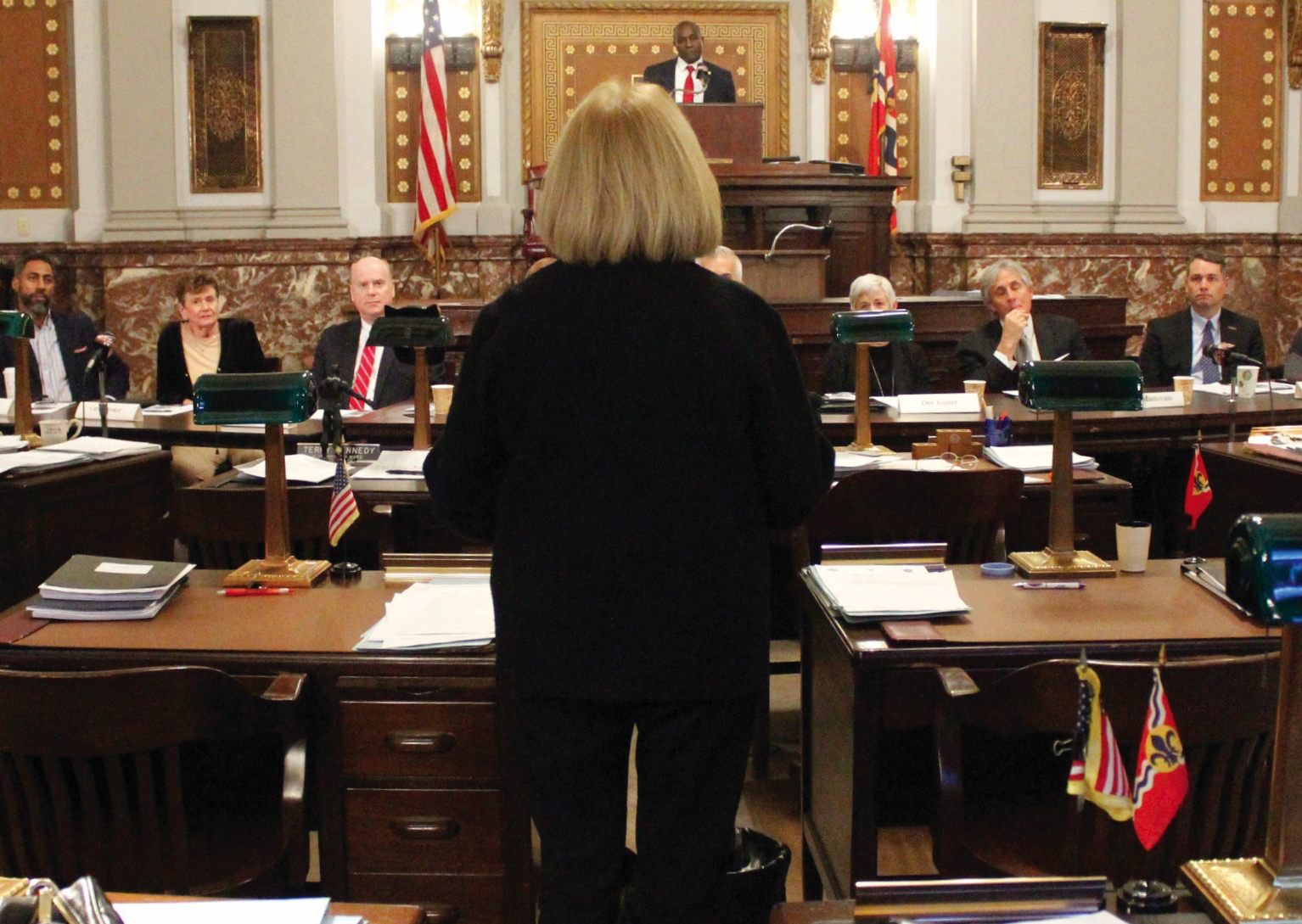 Pictured above: St. Louis Mayor Lyda Krewson addresses the nine St. Louis County members of the Board of Freeholders at the board’s first meeting at St. Louis City Hall Nov. 12. The governor’s appointee to the board, attorney Joseph Blanner of unincorporated Jefferson County, shown above far right, said the 19-member board’s timeline does not officially start until after the city seats its half of the board. Krewson’s nine appointees have yet to be confirmed by the St. Louis Board of Aldermen. Photo by Erin Achenbach.

At least one member of the Board of Freeholders believes that education could fall under the board’s powers to reorganize city-county government — but whether voters would approve any plan to combine school districts is another question altogether.

The powers granted to the Board of Freeholders or Board of Electors under the Missouri Constitution are broad, but some observers believe that education can’t be part of the discussion since school districts are created in the Constitution separately from other governmental districts.

That’s why nonprofit organization Better Together said before its own city-county merger proposal derailed earlier this year that it couldn’t include education in its plan for a statewide vote on an amendment combining St. Louis County and St. Louis city into one mega-city.

But not everyone agreed with Better Together’s interpretation, and one of the people who has studied the issue the most is now a current Freeholder and believes education could be covered.

Gov. Mike Parson’s appointee, attorney Joseph Blanner of unincorporated Jefferson County, said at the first meeting last week that he has studied the Freeholder process for four years and believes that education falls under the scope of what the Freeholders can propose. The section of the Constitution that creates the Freeholders states they can “formulate and adopt any other plan for the partial or complete government of all or any part of the city and the county.”

Blanner and the nine county appointees met last week at St. Louis City Hall without the nine city appointees, who have not yet been approved by the St. Louis Board of Aldermen.

The Freeholders have a year under the Constitution to make their proposals, likely meeting weekly. But with the city members on hold, County Counselor Beth Orwick said a quorum was created when the County Council approved its last nominee Oct. 29, spurring a meeting two Mondays after that, as specified in the Constitution.

But that second Monday was Veterans Day, a holiday in both city and county government. So Board of Aldermen President Lewis Reed set the first meeting for the next day, Tuesday, Nov. 12.

But Blanner said he believes the first official meeting of the Freeholders won’t happen until two Mondays after the city makes its appointments. Since the Constitution mandates that the Freeholders are a city-county board, the thinking is that one side can’t meet without the other.

And the Jefferson County attorney believes the Freeholders’ yearlong countdown doesn’t start until that joint meeting.

With city aldermen declining to take a vote on the city Freeholders, it’s not yet known when that could be.

Combining school districts in the county or expanding the Special School District was never advertised as a power of the Board of Freeholders by the Municipal League of Metro St. Louis, which organized the petition drive to create the board to counter the Better Together process.

Instead, the League — which is comprised of the 88 municipalities in St. Louis County — hopes that the city of St. Louis re-enters the county as a municipality.

Municipal officials prefer that option because their cities continue to exist.

Blanner cites a precedent for the education discussion in the 1926 Freeholders, which developed a merger plan that included a combination of all school districts.

“That may have been part of the reason it was rejected,” Blanner said of the educational component. “But yes, they included education consolidation in that proposal.”

Under the plan rejected by voters nearly 100 years ago, the city would have taken over all of the county, with the city Charter serving as the governing document for the entire area.

The plan passed in the city but failed in the county.

It was only placed on the ballot after city Freeholders secured the signature outside of official meetings from one county Freeholder, never holding a vote with the entire board, according to Terry Jones’ book “Fragmented by Design.”

And just like in 1926, anything proposed by the 2019-2020 version of the Freeholders would have to be approved by voters in both the city and the county, separately.

And many people in the county think any proposal to merge school districts would doom any Freeholder proposal, no matter what else it included.

“I see it as a nonstarter,” council Presiding Officer Ernie Trakas, R-Oakville, said of voters considering the idea of unifying or combining school districts. His wife, Lori Trakas, is a former member of the Mehlville Board of Education.

And although Trakas can see how some legal scholars believe education could be included in the plan, he doesn’t believe that the board has the power to touch schools.

As the Freeeholders were appointed, the idea of one large school district had not yet come up at the weekly county superintendents’ meetings attended by Mehlville Superintendent Chris Gaines.

“I would assume if they’re going to have conversations that anything and everything might be on the table,” Gaines said. “I don’t know if they would have the authority to do anything in that regard though. I really don’t have a clue.”

If the Freeholders discuss education, the conversation might be led by Clayton Board of Education member Jason Wilson, one of the county Freeholders.

During his confirmation hearing, Wilson supported the idea of examining education, but said it was too early to talk specifics.

“Maybe there will be a (combined) St. Louis School District, I don’t know,” Wilson said.

But he said overall, “I’m in favor of whatever’s going to mitigate crime,” such as a plan that creates a culture of “folks that can survive, that can go to school and can get education and not be worrying about whether or not they’re going to get shot, they’re going to get beat up, whether or not the teacher cares about ‘em or not. If that involves redistribution of wealth, so be it.”