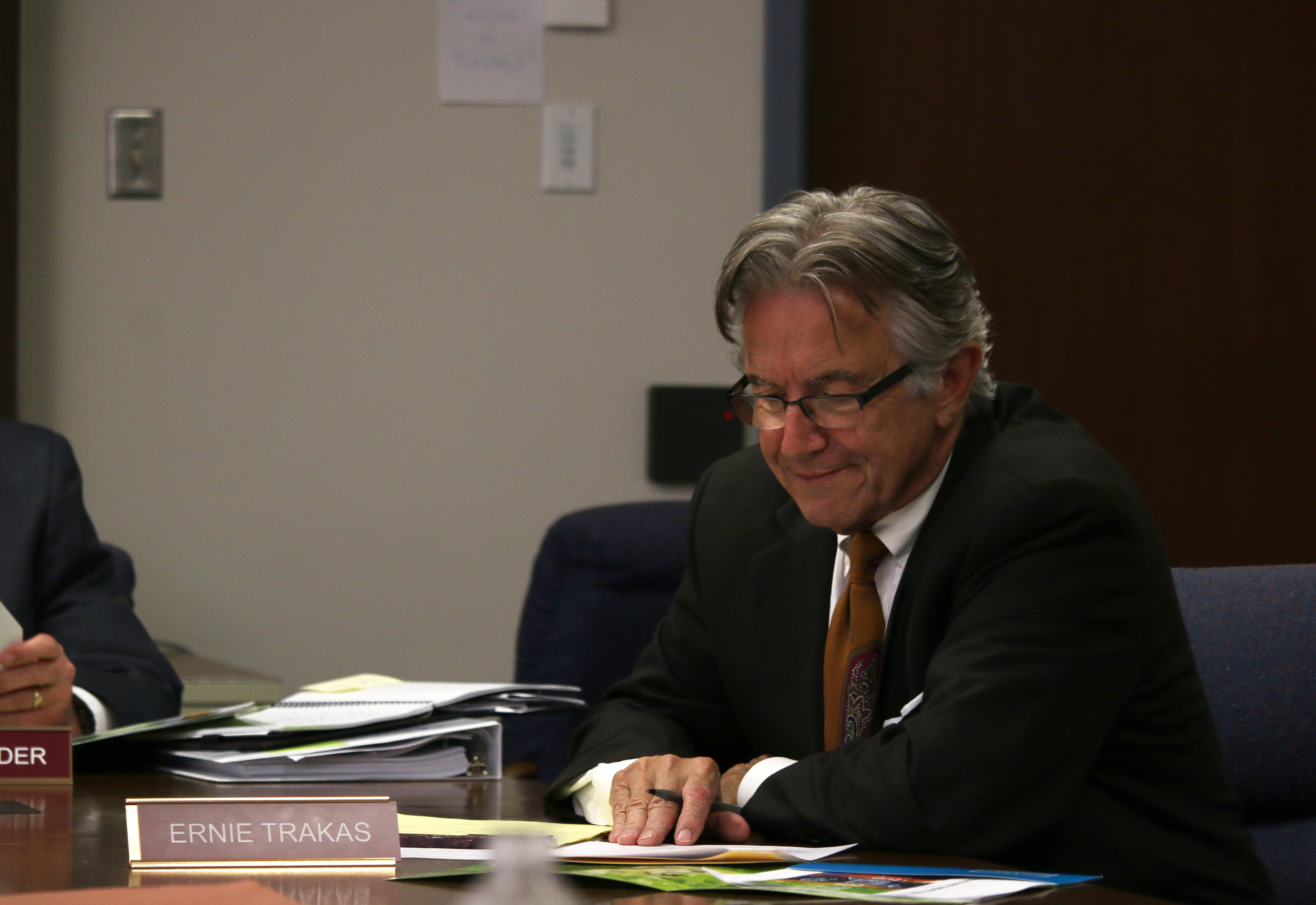 Sixth District Councilman Ernie Trakas looks over documents during an economic development June 4, 2019 in Clayton. Trakas has created a proposal to include an impeachment process in the county charter. Photo by Jessica Belle Kramer.

As the St. Louis County Charter Commission continues its work reviewing and recommending changes to the county Charter, the 6th District County Councilman has a recommendation spurred by the resignation and felony charges of former County Executive Steve Stenger.

Despite Stenger’s charges, if he hadn’t resigned he couldn’t have been impeached since that’s not allowed under the county Charter.

At the May 29 commission meeting, council Presiding Officer Ernie Trakas, R-Oakville, sought to change that by giving a proposal he drafted to the commission that would amend Article III of the county Charter by adding a subsection that would create an impeachment process for the county executive.

“This amendment is necessary given current events… The idea that an unscrupulous, unethical county executive can occupy his office, sell his position of power and influence is unacceptable,” Trakas said during the public forum at the commission meeting. “What’s more unacceptable is the inability of the council to remove such an individual when the need arises.”

Trakas said he modeled the impeachment process off the U.S. Constitution. The proposal states that any member of the council may move to issue articles of impeachment against the county executive, with the votes of no less than five of the seven members of the council.

In an interview with The Call, Trakas said the Charter proposal could use some fine-tuning.

But he added, “The sheer existence of the mechanism creates a chilling effect on any county executive in terms of questionable conduct, and if it doesn’t, then shame on him or her.”

The commission had previously discussed the potential of adding impeachment proceedings to the Charter. At the April 11 meeting, about two weeks after Stenger was served with a federal subpoena, the commission’s governance work group said that they had briefly discussed the possibility of adding impeachment protocols into the Charter, but came to the consensus that it could have negative consequences on how county government functions.

First District commissioner and former state Rep. Courtney Allen Curtis, D-Ferguson, questioned why anyone would object to the provision to remove the county executive.

“I think in a local government setting, it would almost every time result in litigation,” answered commissioner Bob Grant, retired deputy county counselor. “And if litigation does result, I think the functioning of the government would literally cease at that time because no one could determine who was authorized to perform what functions during that litigation…until there would be a final decision (by the courts).”

This is not the first time Trakas has lamented to the commission about what he feels is a lack of power for the County Council to make decisions.

At the second meeting of the commission in March, Trakas spoke during the public forum on the flaws of the Charter and how it allowed the county executive to operate “as close to a monarch as an elected official can.”

“It’s no secret that I take the position that this Charter is hopelessly flawed and incapable as a founding document,” said Trakas. “The Charter that’s drafted is executive-centric to an absurd degree, regulating the council, until recently, to little more than a rubber stamp for whatever the executive wants done.”