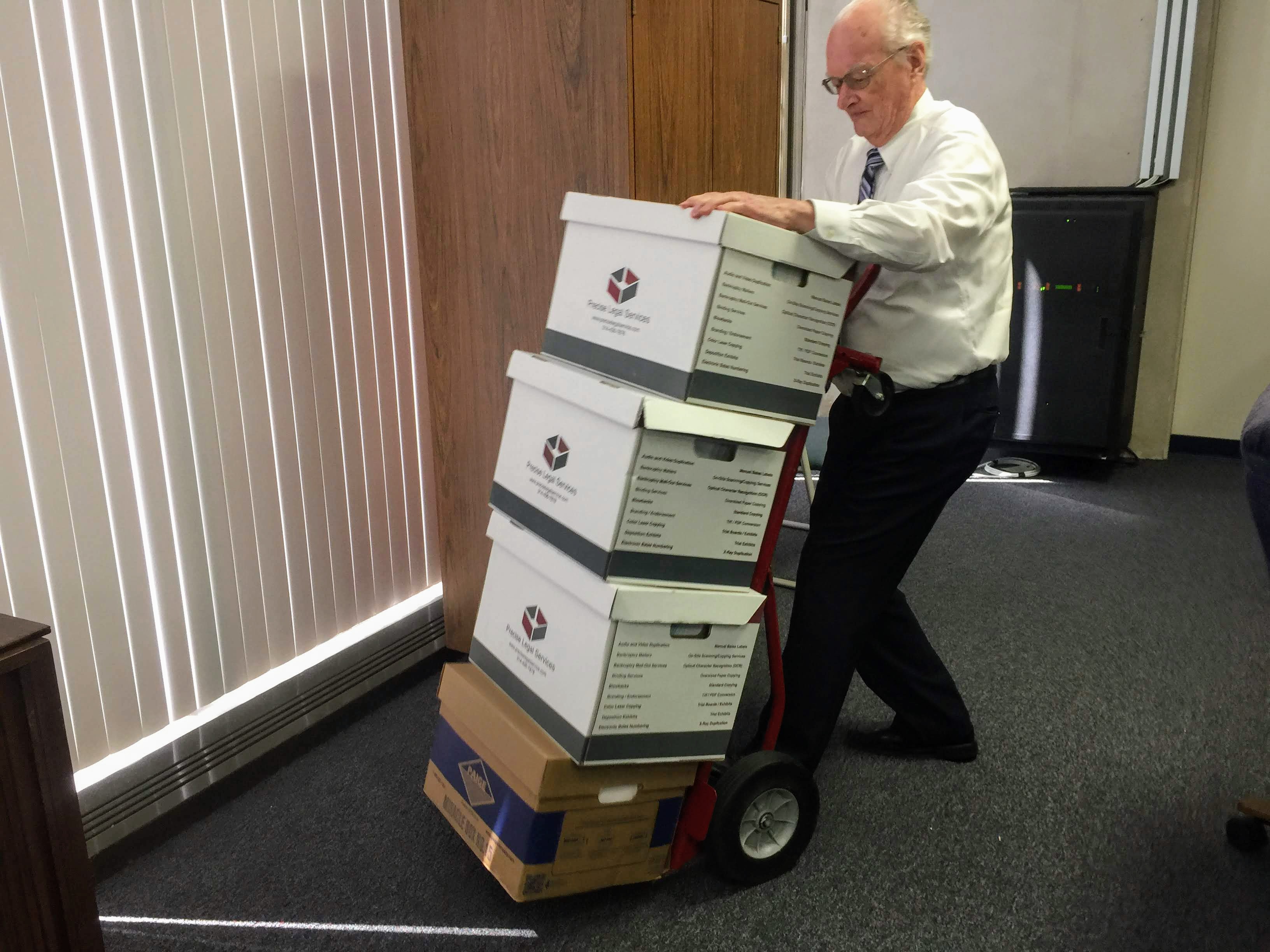 Pictured above: Black Jack Mayor Norm McCourt, who works in the county clerk’s office, transports the four boxes filled with an estimated 7,000 pages of documents from the Glarner brothers about the county’s Northwest Plaza lease to the county’s vault for storage after an Ethics Committee hearing June 25. Photo by Gloria Lloyd.

For what is likely the first time in St. Louis County history, the County Council has ordered private citizens to testify to the council or possibly go to jail.

The council unanimously voted July 2 to issue subpoenas to Robert and David Glarner, the brothers who own the former Northwest Plaza mall, which has been redeveloped into a North County Government Center and office space called The Crossings at Northwest.

The two subpoenas, which were served on both the Glarners July 19, order the developers to appear at a hearing of the council Ethics Committee Aug. 6.

Under the county Charter, if anyone subpoenaed by the council fails to appear, they can be “arrested and brought before the council,” said council Presiding Officer Ernie Trakas, R-Oakville, who chairs the Ethics Committee. “Hopefully it won’t come to that, but that’s really more their decision than mine.”

The Glarners were Stenger’s largest campaign donors, giving at least $365,000 to him over the years, starting with a mystery $20,000 donation from their company Givco LLC early in 2016.

Soon after, current County Executive Sam Page, then the 2nd District council member representing the area that includes Northwest Plaza, announced his support for Stenger’s plan to move the election board headquarters from Maplewood.

But critics of the deal like Trakas and 7th District Councilman Mark Harder, R-Ballwin, say the lease is overpriced and was potentially a quid pro quo between Stenger and the developers.

The Glarners have had one meeting to negotiate, but their attorneys met last week with Trakas and county Chief of Operations Garry Earls to outline how there are two parallel tracks with the county and the Glarners running now — the renegotiation and the Ethics Committee.

Trakas said he’ll drop the investigation if the Glarners give in to the county requests for a lower price for the lease.

Glarner spokesman Rich Chrismer said in a statement that the developers have cooperated with the county to create the North County Government Center over three administrations: “When you consider the openness and transparency the Glarners have showed since Day One… supplying more information about the leases every time the county requested it; when you consider that the committee made this recommendation to the council before it reviewed the more than 7,000 pages of information the Glarners willingly provided; when you consider the Glarners’ willingness to discuss the leases… the world-class government and commercial center they created… and when you consider all of this, it’s not easy to dismiss the idea this might have more to do with politics and political theatrics than substance.”