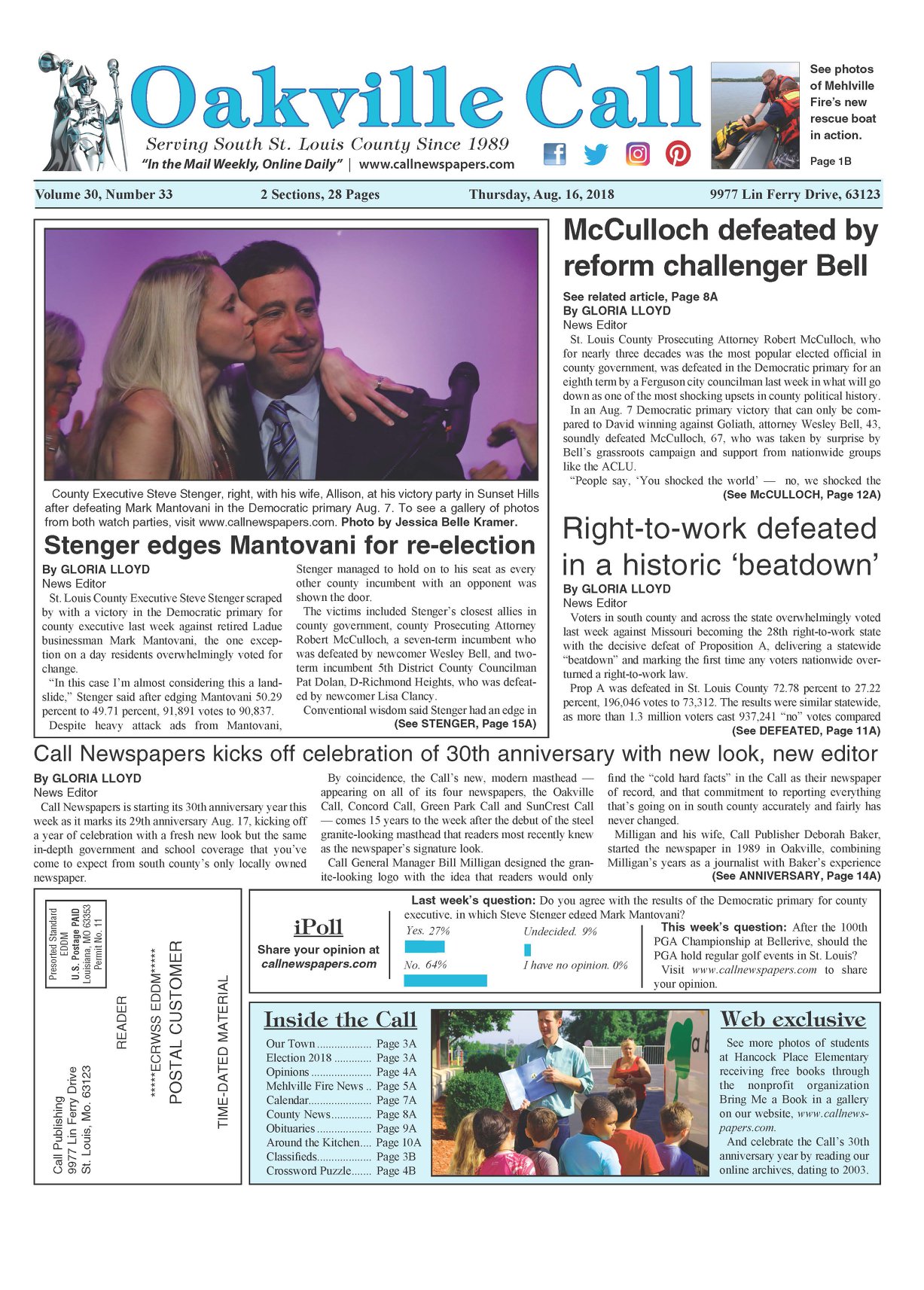 Call Newspapers is starting its 30th anniversary year this week as it marks its 29th anniversary Aug. 17, kicking off a year of celebration with a fresh new look but the same in-depth government and school coverage that you’ve come to expect from south county’s only locally owned newspaper.

By coincidence, the Call’s new, modern masthead — appearing on all of its four newspapers, the Oakville Call, Concord Call, Green Park Call and SunCrest Call — comes 15 years to the week after the debut of the steel granite-looking masthead that readers most recently knew as the newspaper’s signature look.

Call General Manager Bill Milligan designed the granite-looking logo with the idea that readers would only find the “cold hard facts” in the Call as their newspaper of record, and that commitment to reporting everything that’s going on in south county accurately and fairly has never changed.

Milligan and his wife, Call Publisher Deborah Baker, started the newspaper in 1989 in Oakville, combining Milligan’s years as a journalist with Baker’s experience in community newspapers and direct mail.

The result is Call Newspapers, which is mailed to 50,000 homes and businesses in south county every Thursday, along with 30,000 more addresses with the expanded edition to Affton, Arnold and Lemay.

The newspaper appears in store stacks from Columbia, Illinois, to Kirkwood, and from the St. Louis city limits to Arnold, and is widely read even in those areas due to its hard-hitting coverage of government and schools, which is increasingly rare to find in a community newspaper.

And none of it would be possible without the local businesses who have supported the Call throughout the years.

“The Call’s hardworking staff thank our readers, community, schools, churches, businesses, nonprofit organizations and government for their contributions and loyal support as we approach our third decade,” Baker said.

Call Newspapers continues to strive for excellence in journalism on a weekly basis.

“It has been rewarding and sometimes challenging to get elected officials to give us information, but since August of ’89 the Call has made every effort to cover everything that has happened in the community that the people want to know about,” Milligan said on the Call’s 15th anniversary, and the words remain true today.

In that spirit, newly installed News Editor Gloria Lloyd will carry on the Call’s tradition of community journalism and cutting-edge breaking news. She took over from former Executive Editor Mike Anthony in March.

Readers can not only appreciate their weekly newspaper in the mail, but will also find it easy to connect with the community through social media and e-newsletter links to the Call’s new website, www.callnewspapers.com, which will celebrate its first anniversary in September.

In our 30th season, readers will be better served through the merger of the Call’s mailed weekly newspapers and the updated, user-friendly online edition.

All digital platforms are designed to let you know what’s happening now and to make it easier to get the latest news through the latest technology, on either mobile or desktop.

You can find anything you want on www.callnewspapers.com, whether it’s information on the next election or sending in letters to the editor, calendar events, engagements, wedding, anniversary, birth or obituary announcements, the latest recipe or crossword puzzle or finding the right business or service provider for solutions around the home, even for the next meal out or ordered in or for planning a special event. To submit your news, visit the “Submit Your News” tab.