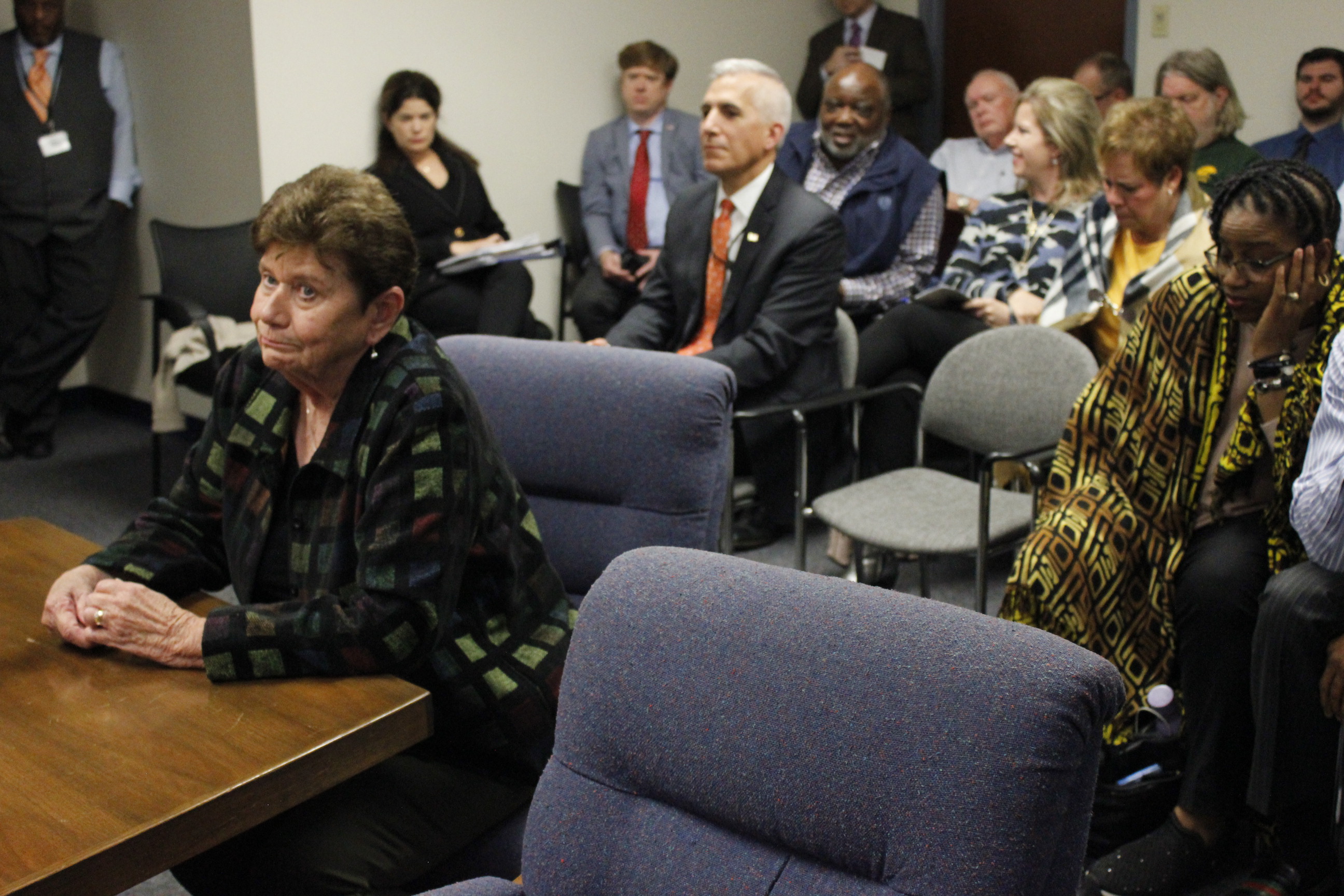 Pictured above: Board of Freeholder appointee Carol Stoker and, pictured behind her in an orange tie, appointee Dr. Alex Garza. Photo by Erin Achenbach.

The Board of Freeholders that could approve a city-county merger was set to meet for the first time this week after St. Louis County approved its nominees, but the city still hasn’t approved its half of the board.

The county freeholders were set to meet at St. Louis City Hall Tuesday — after The Call went to press. It was unclear whether it’s legal for the freeholders to meet without the city contingent, whether the one-year deadline for Freeholder decisions was set to start Tuesday and what happens next.

County Counselor Beth Orwick referred questions to county Communications Director Doug Moore, who said that most of the rules will be set by the Freeholders at their meeting Tuesday.

The County Council approved the nine appointees of County Executive Sam Page Oct. 22 and 29, although only four were unanimous votes.

Attorney Joseph Blanner lives in the Jefferson County section of Eureka, which qualifies him for the board since the governor’s appointee can’t be from either St. Louis County or St. Louis city. Blanner practices law at a firm he owns in Town and Country, and is one of the youngest board members.

In an email to the Freeholders, Page said that Orwick determined the timing of the first meeting of the Freeholders, which the Missouri Constitution states will happen two Mondays after the board is appointed. A quorum of the board was considered appointed when the county made its ninth selection Oct. 29, which meant that the time to meet would have been Monday, Nov. 11.

But since that was Veterans Day, St. Louis Board of Aldermen President Lewis Reed set the meeting for the next day.

The city Board of Aldermen has not yet brought any Freeholders to a full vote of the board because Mayor Lyda Krewson’s nominees are being held up in a committee that believes that there weren’t enough nominees from north St. Louis city.

But the rest of the county contingent met with opposition. After facing intense questioning during the Oct. 15 hearing about whether he was truly a political independent or a Democrat in disguise, SSM Health Chief Medical Officer Alex Garza squeaked by in a 4-3 vote.

All three 4-3 votes had the four Democrats voting for the Freeholders, while the three Republicans rejected them.

During the hearing, Stroker had said she is going in with a positive view of the city re-entering the county. She was approved 5-2 with Fitch and Trakas opposed. However, Harder worked with Stroker and the Hazelwood council on the PowerPLEX sports complex and voted for her.

“I’ve known him to be pretty straightforward with respect to his representations, so I manifestly differ with Councilman Fitch and Councilwoman Dunaway, and I vote aye.”

The lone South County representative on the board, Forand of Sunset Hills, was one of the few nominees who earned all the votes of the council.

The broad support came despite questioning Forand faced at the hearing, where Forand’s representative on the council, Fitch, questioned her Republican credentials on the insistence of a constituent. The constituent cited a $250 donation Forand made to former 6th District Councilman Kevin O’Leary, D-Oakville, who once owned his namesake bar in Sunset Hills.

Forand said that O’Leary is an old family friend who asked her personally to donate.

She added that she wasn’t sure how to prove she was a Republican, other than noting that she formerly served as president of the St. Louis Young Republicans, was the Gravois Township Republican committeewoman for eight years, worked for Republican Gov. Matt Blunt and interned for the late Republican Sen. Anita Yeckel.

Searcy, the only unincorporated representative, said he is also the only “common man” on the Freeholders.

Searcy said that a problem St. Louis has always had is that every decision is made in a board room, not by the average Joe.

“What’s important to me is to leave something for my kids, for my grandkids, that they don’t have this same problem in 20, 30 years, where the county and the city are maybe still trying to decide if they’re going to come together,” Searcy said. “A lot of services are redundant — I think it can be improved.”

Wilson said he thinks pro-merger organization Better Together left education out of its conversations earlier this year, and as a lifelong St. Louisan and the first African American school board member in Clayton, he hopes to bring it back in.

He wants “transformative and innovative” solutions, and he believes that disinvestment in North County is what has contributed to Clayton being so wealthy. Along with education, he said that “tax base” is a “non-negotiable.”

“If you’re super wealthy here and you have nothing there, to me it’s simple — you gotta redistribute the wealth a little bit,” Wilson said.