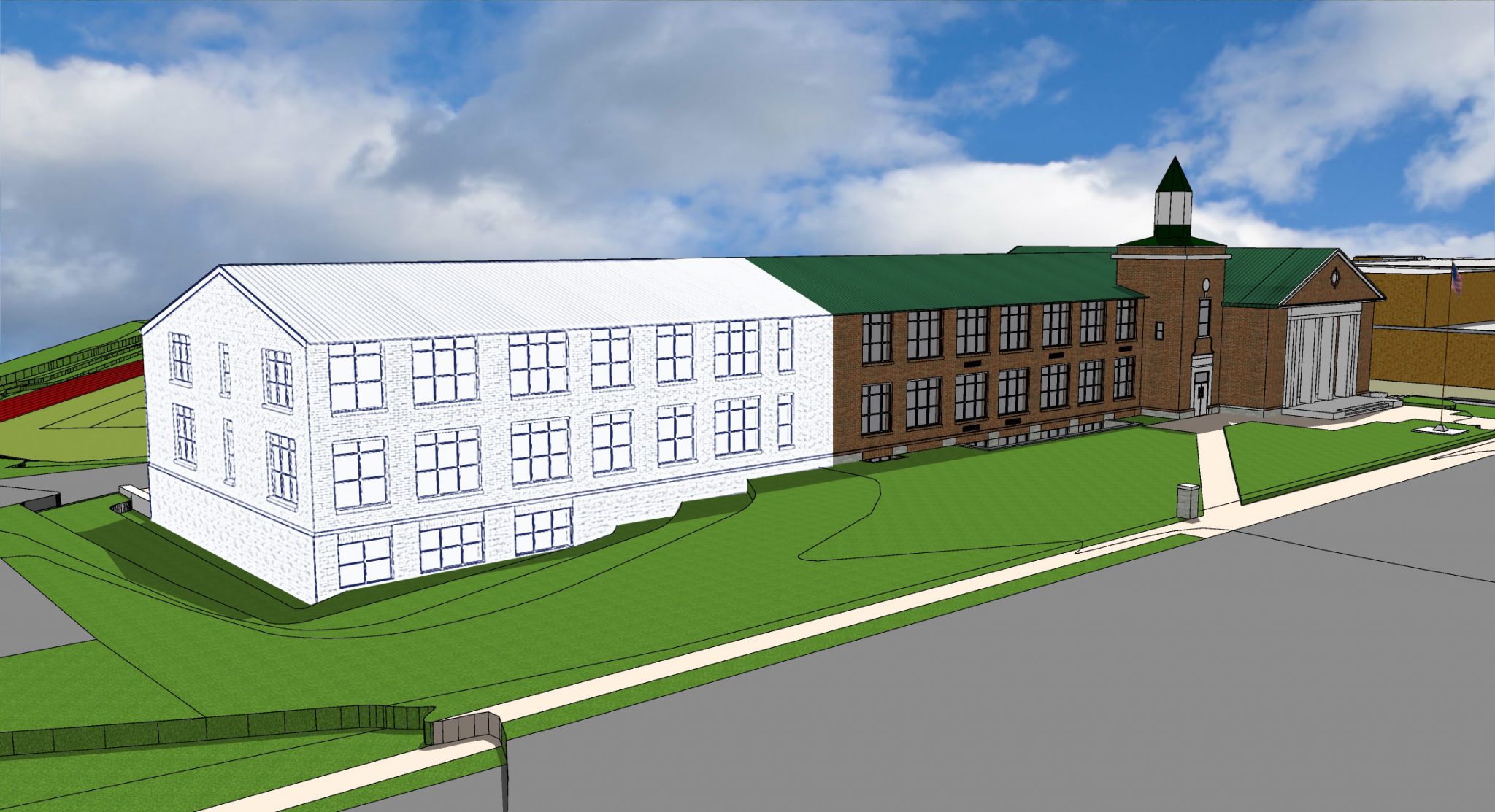 Pictured above: A rendering of the middle school expansion. Image courtesy of Bayless Schools.

Plans for the expansion of Bayless Junior High are underway, with Bayless School District taking the first steps toward construction with St. Louis County officials.

In order to expand the junior high, Bayless has to tear down a current cell tower that is located next to the current school building. The school district applied to the county for zoning to relocate the tower to another site 500 feet away from the school. The old 75-foot Verizon tower would be replaced by a 100-foot one that would be 123 feet from the closest residential property.

The junior high was built 85 years ago to accommodate 250 students but currently has 450 attending, with 200 to 250 children transitioning to space at Bayless High School at various times, Hawkins said.

Voters approved a bond issue in April to fund the school addition, but “obviously it’s impossible to expand that building” without moving the cell tower, Hawkins noted.

As part of the master plan, Bayless is designing “more buildings, more campus improvements,” he said. An upgrade that just debuted is new lighting for the football field for Bayless High School’s new football team. The Bronchos’ first night football game under the lights “went off without a hitch,” Hawkins said.

Commission Chairman Wayne Hilzinger of Oakville, who used to serve on the Mehlville Board of Education, questioned the wisdom of keeping an 85-year-old school building for a new renovation.

“It was very well built and was designated as a fallout shelter,” with at least one wall made of 18 inches of concrete, Hawkins said. “We’re told it can be improved in place… It’s an impressive structure, and a historic structure.”

As for keeping up with technology, Hawkins said it’s possible to upgrade in the old building and that the junior high is surprisingly energy efficient for an older building.

As part of the master plan, the parking lot behind the high-school gym will be reconfigured to replace parking lost in the expansion and allow workers on the tower to reach it through that parking lot.

The tower is “permitted by the underlying zoning of the school,” said acting Planning Director Gail Choate, who also clarified that the school district’s petition is only for the cell tower, not its school buildings, which are not covered by zoning laws.

But even though workers rarely come to the tower, the extra road behind the school near the houses was a problem for commissioner Bill Sneed, who lives in Oakville.

“That will impact those residents by having a road go directly behind their homes,” he said.

Editor’s note: This article was updated with the correct Bayless team name, the Bronchos (not Broncos).