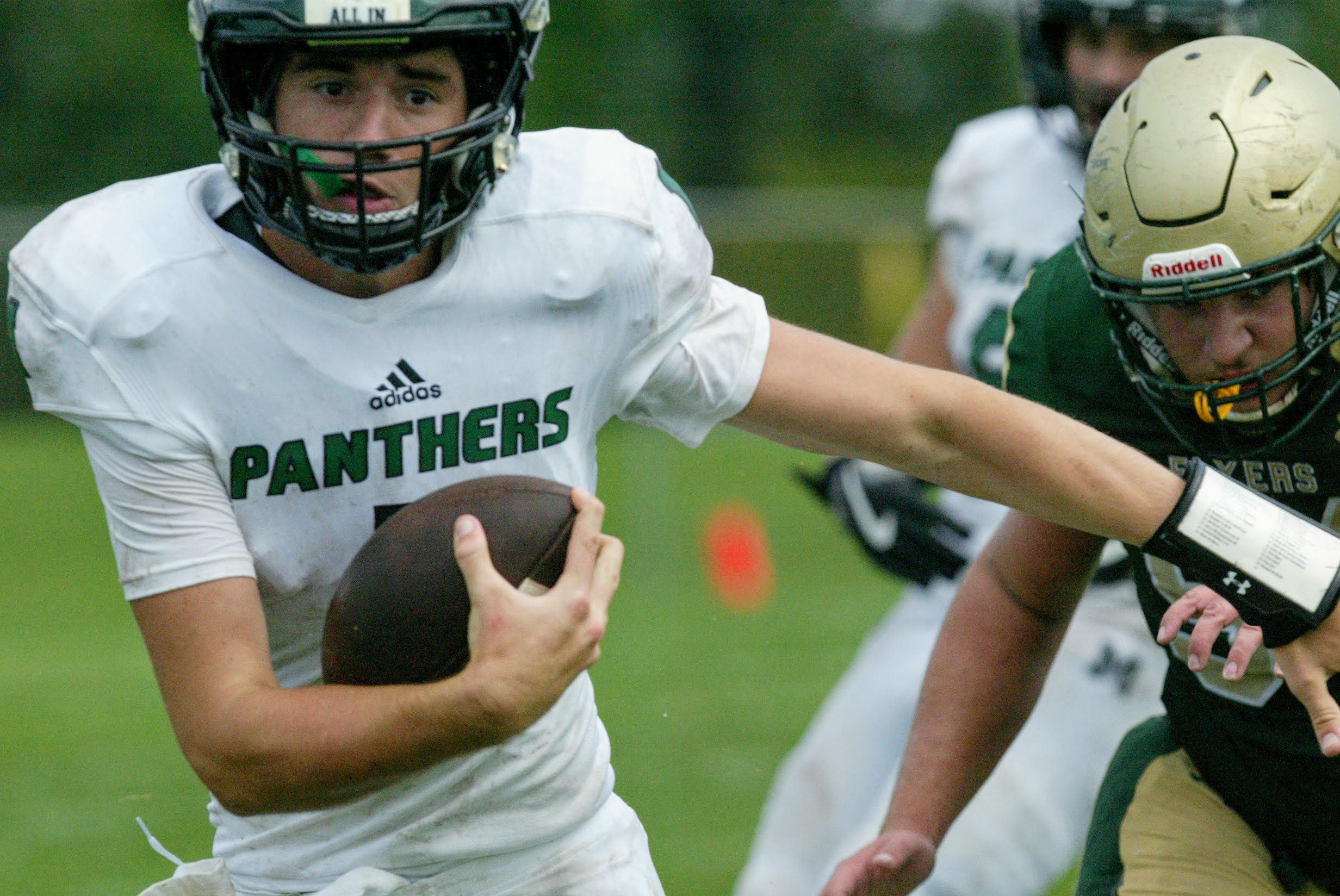 Pictured above: Mehlville Panthers quarterback Evan Robertson takes the ball from the Flyers in the rain-delayed, mud-soaked game in September. Photo by Bill Milligan.

Behind an explosive running game, the Mehlville High football team defeated archrival Oakville High 51-0 at home last week, as the district’s new Alumni Hall of Famers looked on after their induction.

The win for the Panthers (6-3) marked their fifth victory in a row as they racked up 302 yards rushing against the Tigers.

The Tigers, now 1-8 for the season, marked their eighth straight loss after opening the 2019 season with an impressive 3-0 win over Hazelwood West.

“The game definitely did not go the way we had anticipated,” Oakville head coach Arlee Conners said. “We didn’t do well tackling or blocking, and we gave up a lot of big plays.”

Mehlville wasted no time getting on the scoreboard as senior running back Will McCaine scored on an eight-yard run with 10:21 left to play in the first quarter of action as senior Charlie Galentine recorded the extra point. McCaine carried the ball just four times for 91 yards rushing.

“Will is just one of the toughest kids,” Heinemann said. “He’s a selfless running back that has good speed.”

The Panthers would extend their lead to 14-0 as senior running back Raphel Brown hammered out a three-yard touchdown run with 4:03 left in the first quarter as Galentine notched the extra point. Brown carried the ball two times for four yards in the win over Oakville.

“Raphel is another guy that’s become more involved with the offense this season,” Heinemann said. “He’s been doing a really good job for us this season.”

Mehlville would finish out the first quarter of action with a 13-yard touchdown run by senior running back Dre Townsend with 1:32 left to play to bring the score to 20-0. Townsend recorded 19 yards rushing on just three carries.

“Dre transferred to us this summer and came to us as a wide receiver,” Heinemann said. “He had some really slick moves in order to get that touchdown.”

Mehlville would extend its lead for 27-0 on a 46-yard touchdown run by senior running back Jacobi Shelton as Galentine recorded the extra point. Shelton would finish the evening with 49 yards rushing on three carries.

“Jacobi is a guy that plays a lot of defense for us and can also run the ball really well,” Heinemann said. “He’s actually one of our better blockers out there on our team.”

Galentine would nail down a 47-yard field goal with 6:55 to play in the first half to give Mehlville a commanding 30-0 lead.

“Charlie’s always telling me, “Coach I’m ready for a field goal,’ and I’m comfortable in having him kick from just about anywhere,” Heinemann said. “He did a great job on Friday night for us.”

Townsend would score his second touchdown of the evening with an electric 67-yard kickoff return in the opening minutes of the third quarter as the Panthers extended their lead to 37-0. Senior running back Steven Haverstick would pound out two touchdowns in the third and fourth quarters to give the Panthers their impressive 51-0 win over the Tigers. Haverstick led the Panthers with 112 yards rushing on eight carries.

“Steven is a kid that if we need to grind out the clock, he’s the guy that I’m going to,” Heinemann said. “He’ll lower his shoulder and fight for the yards.”

As the No. 2 seed in the Missouri Class 5, District 2 playoffs, the Panthers take on defending state champion Vianney (1-8) at home Nov. 8.

“Vianney has played a really tough schedule and we are going to go in there and do what we’ve got to do,” Heinemann said. “We’re going to give ‘em hell and see how it goes.”

The state semifinal game against Vianney is slated for a 7 p.m. start.