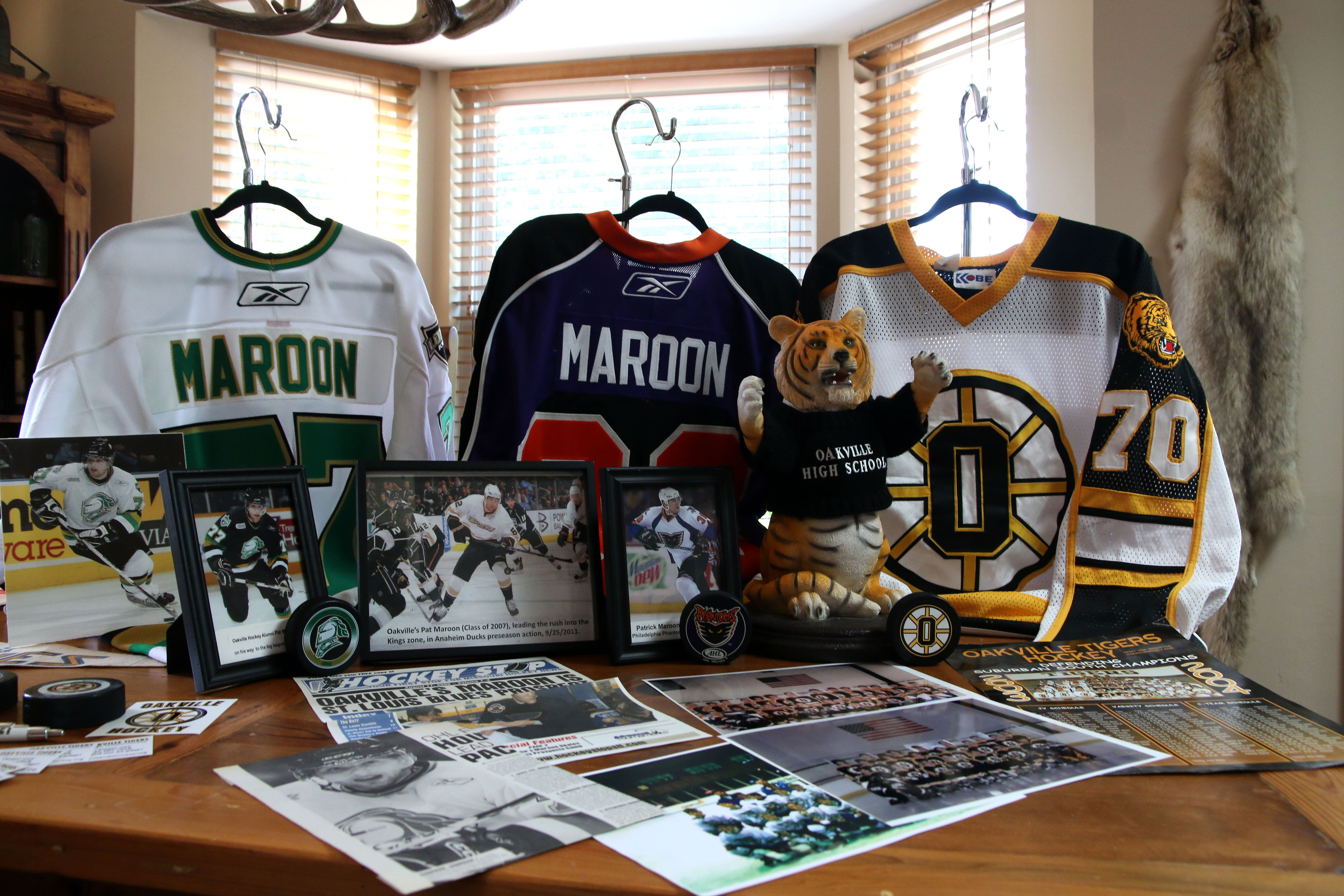 Mick O’Halloran, who has been with the Oakville Hockey Club since the 2000-2001 season, keeps up with all of his former athletes. He keeps track of where they are going and what teams they’re playing for once they leave, holding on to some of their old jerseys and other items. Pictured above are Maroon’s old London Knights, Philadelphia Phantoms and Oakville Hockey Club jerseys. Photo by Jessica Belle Kramer.

Even before signing with the Blues, Patrick Maroon played an important role in the Oakville community as a talented athlete at Oakville Middle School and Oakville High and a dedicated player for the Oakville Hockey Club.

Now, Rich Sturm is best known as the Oakville High baseball coach, but then, he was Maroon’s physical-education teacher in both middle and high school.

Even as a seventh grader, Maroon demonstrated a passion for athletics, as well as impressive physical abilities, Sturm said.

“All of the things you would need to be an exceptional hockey player, he had back then,” Sturm said. “He always had that skill set going for him.”

Sturm moved to teaching and coaching at the high school around the same time Maroon graduated middle school.

“Pat was a nice kid. I had a great relationship with him. He was easy to get along with. He obviously loved sports, and he loved hockey. That was his passion. Pat is someone who had to work hard and persevere,” Sturm said.

Following his older brother Justin, Maroon began playing hockey for the Tigers in 2002, his freshman year of high school. Even in his first year, Maroon proved his talent to bypass the junior varsity team and land a spot on varsity. By his senior year, he helped lead the Tigers to victory at the 2006 state championship.

“As a freshman, he was one of the top point producers,” Oakville Hockey Club’s 2006 assistant coach Ben Lamperti said.

“[Then-head coach] Kevin Geiger wouldn’t let you get away with coming to the rink without putting in your best effort.”

Lamperti coached Maroon during the two seasons he played for the hockey club, 2002-2003 and 2005-2006. In between, the future star left school to play hockey.

And just like now, Maroon wore No. 7 in high school. Before school let out for the year last week, there was excitement throughout the building that a graduate was one of the key contenders for the Stanley Cup.

And the up-and-down story of both Maroon and the Blues this year are a lesson to students to never give up, Mehlville School District Communications Director Jessica Pupillo said.

“Game 7 (in the Western Conference Finals), his grit and his endurance and his determination and the whole team’s determination is such a great lesson for our students,” she said.