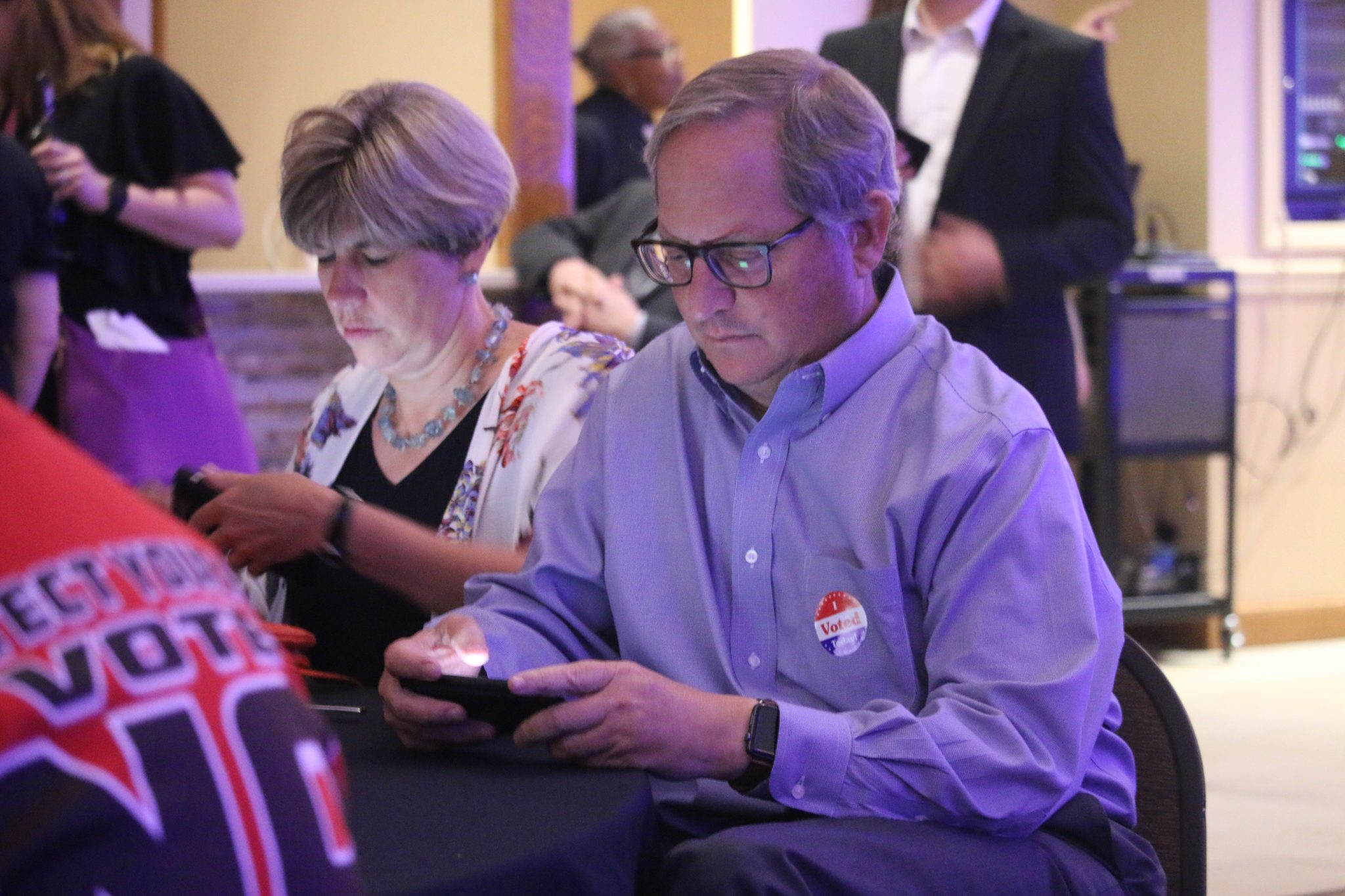 Pictured above: County Counselor Peter Krane keeps an eye on election results at County Executive Steve Stenger’s Aug. 7 watch party. A Charter amendment on the ballot will determine whether Krane continues to serve as the only attorney for St. Louis County or not. Photo by Jessica Belle Kramer.

Just as election results were finalized last week that indicated that one of the County Council’s county Charter amendments in the election Aug. 7 failed by just 12 votes, the council held an emergency meeting to place three more Charter amendments on the November ballot.

The council filed a petition Aug. 24 asking for a recount to see if the 12-vote failure of Proposition 2 would hold up after the county Board of Election Commissioners certified that result Aug. 21. More than 250,000 votes were cast on the measure, remarkably split down the middle. A judge is likely to grant a recount given the less than 1-percent margin.

The measure would grant the council its own attorney to rival the county counselor, along with the authority to contract with outside private attorneys. If the vote count doesn’t flip in a recount, council Chairman Sam Page, D-Creve Coeur, said the council will likely pursue it again in a future election.

County Executive Steve Stenger says hiring another lawyer is adding an unnecessary layer of bureaucracy to county government. But the problem as the council sees it is that the Charter — the Constitution-like compact that the county operates under — mandates that they get legal advice from County Counselor Peter Krane, who is appointed by Stenger with approval from the council.

“It’s irrational for the County Council to be represented on issues of disagreement with the county executive by an attorney who serves at the pleasure of and can be immediately fired by the county executive,” Page said. “We need an attorney who has a duty only to the County Council. We can then solve disagreements without going to circuit court.”

The council’s other Charter amendment on the ballot, which redefined employment, passed with 54 percent of the vote.

To explain why one passed and not the other, 6th District Councilman Ernie Trakas, R-Oakville, blamed television ads that said Prop 2 had no spending cap.

“Effective messaging that we’re going to hire an attorney and it’s going to cost hundreds of thousands of dollars and have this huge staff, et cetera, probably made it to some people, and they thought that’s an unnecessary expense,” Trakas said. “I don’t think the true picture of simply on an as-needed basis when and if it’s necessary was accurately portrayed.”

Only two of the council’s three Charter amendments counted on the ballot Aug. 7, since a judge threw out Proposition 4, which lumped three questions into one omnibus amendment, headlined by restrictions on campaign-finance contributions that match new $2,600 statewide limits.

The council held its council meeting at an odd time and in an odd place Tuesday morning — after the Call went to press — so that it could approve three new Charter amendments that split that question into three separate measures and still be able to override a possible veto from Stenger before the election board’s deadline.

One question would add the $2,600 campaign-finance limit for county candidates. Another says that the county has to publish financial information on a public website. And a third would give the council greater power over where money goes in the budget, limiting department heads’ ability to transfer money.

To approve the measures, the council moved its typical 6:30 p.m. meeting to 10 a.m. Tuesday. And since the council Chambers were already booked for the county’s annual tax sale, the meeting moved to the new special courtroom on the first floor of the county courthouse.