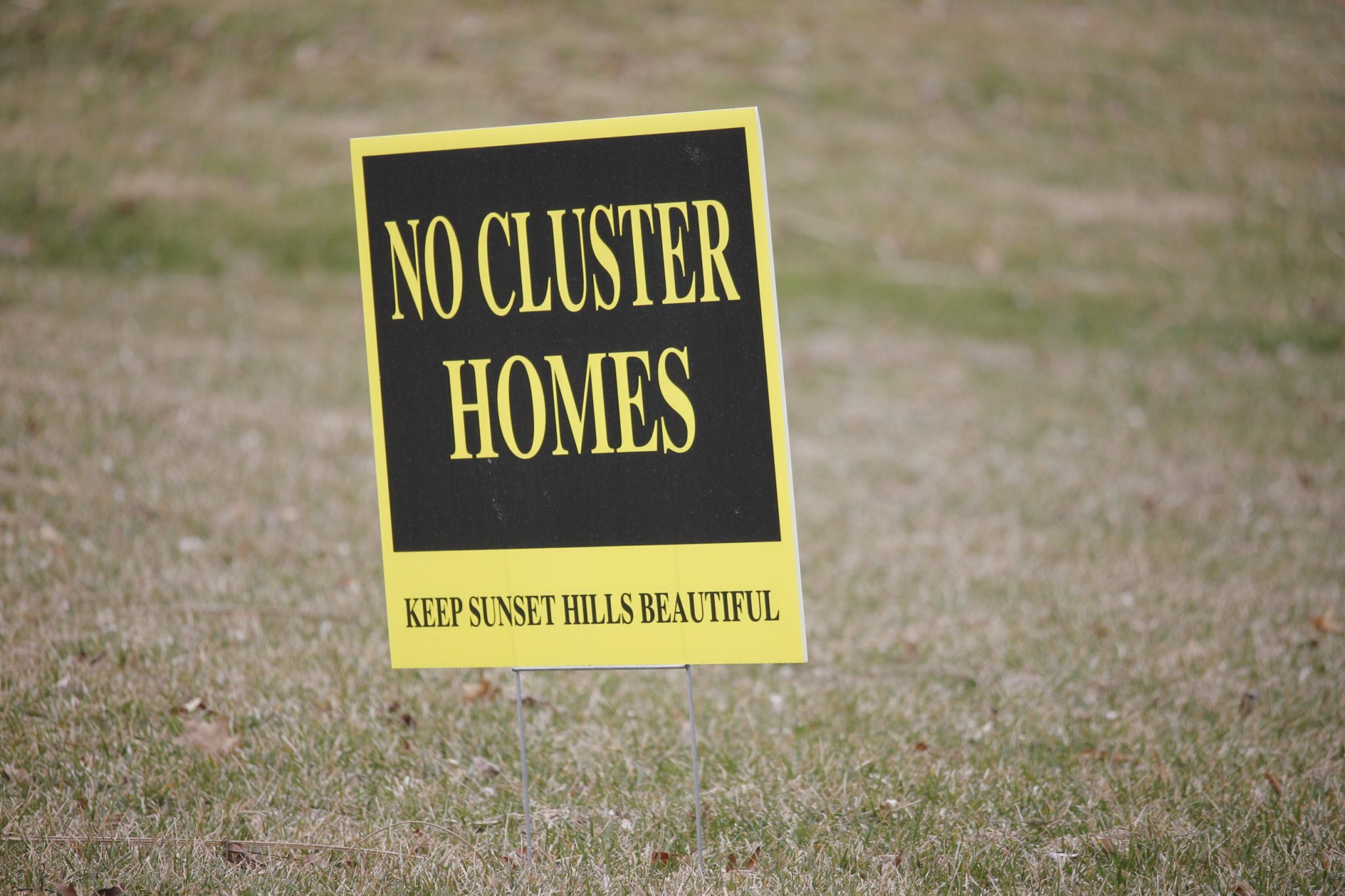 Pictured above: A ‘No Cluster Homes’ sign along Robyn Road in Sunset Hills. The vote on the proposed Fischer & Frichtel cluster home development has been delayed for a third time until the April 23 meeting. Photo by Erin Achenbach.

The March 12 Sunset Hills Board of Aldermen meeting was tense as residents confronted the board after the scheduled vote on the Fischer & Frichtel cluster home development was delayed once again as the petitioner requested postponement.

Over a dozen residents attended the board meeting to voice their complaints about the delayed vote, citing that it was unfair that it had been postponed once again.

The bill is currently scheduled to be voted on at the April 23 Board of Aldermen meeting.

The complaints from the residents about the delayed vote also prompted the board to discuss what kind of limitations, if any, they should place on the number of times a petitioner can request a postponement.

Mayor Pat Fribis then directed City Administrator Eric Sterman to look into other cities’ policies regarding multiple postponements and how they are handled.

“I appreciate the fact we grant this (postponements) to these busy businessmen who petition this place to have the honor of building in our city…but we all take time out of our schedules to come here and we do appreciate the opportunity, but we would like to have a conclusion at some point,” said resident Paul Zanaboni. “We have rights as a city, we are the citizens and we should be heard not only in this area but in the vote as well. You should give us the same respect that you’re giving the developer.”

Fischer & Frichtel first approached Sunset Hills about developing the five-acre tract at 4055 S. Lindbergh Blvd., 9312 Lincoln Drive and 9255 Robyn Road by building a low-density, 12-villa development marketed to empty-nesters. The homes would be detached, single-family homes with included landscaping and would have a price point around $600,000. The property is the site of the Krueger family house of the owners of Wehrenberg Theatres.

The proposal faced backlash from neighbors that it would lower property values and that cluster homes were contrary to the comprehensive city plan.

Others said that allowing Fischer & Frichtel to build would open a “Pandora’s Box” for future developers to request changes to the zoning code since Fischer & Frichtel had requested amendments to the city’s current zoning law to accommodate their proposal. The property is currently zoned for R-2 Single Family Residential with a minimum 20,000-square-foot lot size; the proposal would require the zoning to be changed to PD-RC Planned Development-Residential/Cluster Homes.

The proposal was originally slated for a public hearing in October but was postponed twice until a public hearing was finally held in December, where over 20 residents spoke out against the development. After the public hearing, the board was scheduled to vote on the proposal Jan. 8, but the petitioner requested postponement until the Feb. 12 meeting. And once again the vote got a continuance since there was not a full board in February.