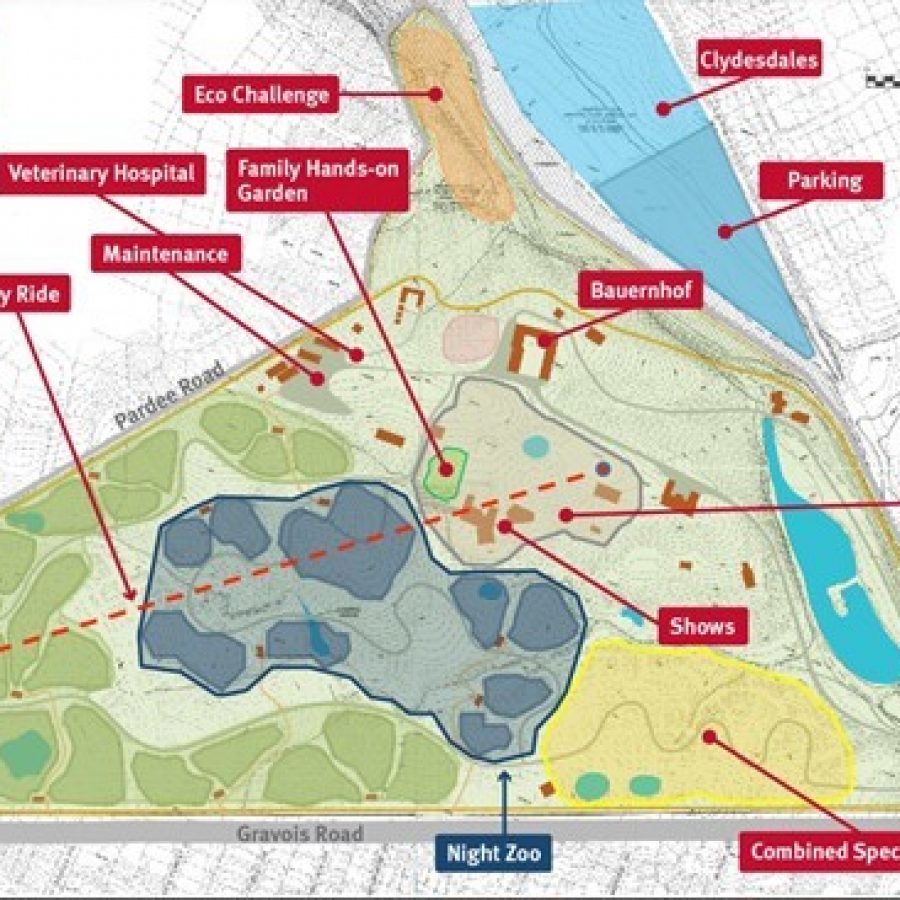 The St. Louis Zoo's depiction of what Grant's Farm could look like under zoo ownership.

The St. Louis Zoo withdrew its proposal to buy Grant’s Farm from the Busch family last week after a survey showed the public didn’t support the move.

Last fall, zoo officials said they were interested in buying the south county institution to expand the zoo’s available land for a conservation breeding ground — the one asset other top zoos have that the St. Louis Zoo lacks, Executive Director Jeffrey Bonner said.

The plan, however, hinged on the outcome of a lawsuit among the Busch family members in the Busch Family Real Estate Trust, which owns the farm. Four of the siblings are suing their brothers, Billy and Adolphus Busch, to force a $30 million sale of the 281-acre farm to the zoo. Adolphus Busch supports Kraftig beer owner Billy Busch’s alternative proposal to buy the farm for $24 million and continue to operate it as a family attraction and the headquarters of Kraftig.

A hearing is set March 28 in the case.

Since the zoo’s potential ownership of Grant’s Farm was also contingent on St. Louis County voters approving a sales-tax increase, the zoo conducted a survey to gauge public support, Zoo Association Board of Directors President Matthew Geekie said in the March 4 announcement.

“The response was loud and clear: the people of our region love the Saint Louis Zoo Association, but they would prefer Grant’s Farm stay in the Busch family and that the Zoo focus on ensuring that it remains an affordable, top-quality attraction,” Geekie said.

“We also realize at this point that the ownership of Grant’s Farm will involve protracted litigation,” he continued. “Given that likelihood, it is in the best interest of the community, the family and the institution for the Zoo to withdraw its purchase offer. We do not want to be a party to causing a split within the Busch family, and we strongly believe we need consensus from that family to move forward with any plans for Grant’s Farm.

“Our next step is to focus on our long-range planning process, including addressing a potential financial shortfall expected in the next few years. We will also look for other, affordable ways to find the space needed for animal husbandry, research and breeding endangered species. Above all, we will continue to focus our attention on ensuring the Saint Louis Zoo remains among the world’s best zoos.”

The zoo’s announcement came two days after the news that Billy Busch delivered a business plan outlining how he would operate Grant’s Farm to his siblings and that the zoo, in turn, asked him if it could potentially lease land for a conservation breeding ground from him.

The current operator of Grant’s Farm, Anheuser-Busch InBev, offered to donate the $30 million purchase price for the zoo to buy the farm, while Billy Busch offered $24 million for a slightly smaller piece of the family property, which has been open to the public since 1954.

In January, Bonner and one of the Busch siblings who supported the zoo proposal for the animal farm, Trudy Busch Valentine, made their pitch to Grantwood Village residents, who seemed open to the zoo’s ownership of the property.

“We really want the legacy of Grant’s Farm, in its entirety, to live in perpetuity. We know that the Zoo will do that, and they will do it with the same integrity and charming, family friendliness our visitors have appreciated all these years,” Valentine told the Call after the meeting. “With this proposal, the Big House and 22 acres could go on to our children and future generations. The Farm will remain open to the public, and our dad’s and the entire Busch family’s spirit will always be a part of this historic home.”