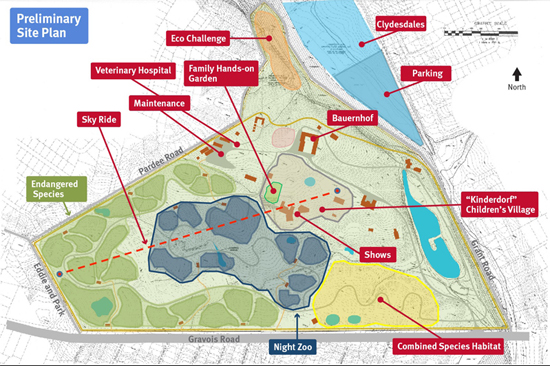 The St. Louis Zoo is set to build a conservation area in north county after purchasing 425 acres of land from the St. Louis Plumbers and Pipefitters Association for $7.1 million, the Zoo Association announced Friday.

After running out of room on its century-old Forest Park main campus, the zoo originally hoped to buy Grant’s Farm for its conservation area, but that plan fell through when a survey found county voters would reject a new tax to fund that purchase.

The zoo, which is supported by taxpayers in St. Louis County and city, plans to pay for the purchase with privately donated funds, Zoo Association President Joseph T. Ambrose stated in a news release. The Zoo Association supports the zoo, but is a separate nonprofit organization.

The conservation area would focus on preserving endangered animals. Full plans for it at the new proposed site are not yet finalized, but the public will likely be able to visit it through some type of wildlife or safari experience as other zoos have done with their conservation grounds, the Zoo Association said.

“There are very few parcels of land in the metropolitan area that could meet this need and we are grateful to have entered into this agreement with Local 562,” zoo President and CEO Jeffrey Bonner stated in the release. “The property offers great terrain, perimeter fencing, utilities, lakes, good buffers surrounding and existing buildings.”

The new land could potentially help free up space at the current zoo, where animals need larger habitats as standards of care are modernized. The purchase sets a “bright and optimistic path for one of America’s great zoological gems,” Bonner said, adding, “With the development of this agreement, our zoo will remain at the very forefront of zoological institutions in the world and preserve a great heritage for the greater St. Louis region.”

The union does not host as many activities outside work for its plumbers and pipefitters, which allows it to sell the large complex that currently serves as its headquarters and includes Emerald Greens golf course.

“As Plumbers and Pipefitters Local 562 leave a nearly 50-year legacy behind, we look forward to enhancing our training program for generations to come,” John O’Mara, Local 562 business manager/secretary-treasurer, stated in the release. “Since the late 1960s, this site has been the home of hardworking skilled craftsmen in the plumbing and pipefitting industry. This also was the place where families would gather after work and on weekends, keeping the tradition of brotherhood alive in Local 562.

“Local 562 is honored to sell this property to an organization that brings added value to the community,” he added. “We are confident the property is being left in good hands and we wish the new owners continued success in the future.”

“The purchase will be made with local philanthropic gifts intended for procurement of this property,” Ambrose stated. “The St. Louis Zoo is an incredible asset to the entire region and it is recognized as a world-class operation that provides tremendous economic value to our community. Maintaining the zoo’s world-class status requires the kind of forward thinking represented in this purchase.”

The zoo credited The Staenberg Group as instrumental in helping to secure the property.